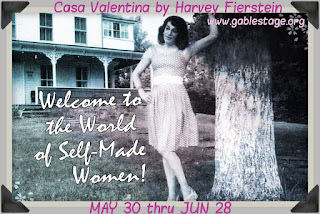 GableStage opened its production of Harvey Fierstein’s Casa Valentina on May 30, 2015.

In 1962 most men went to the Catskills to escape the summer heat, but others went to an inconspicuous bungalow colony that catered to a very special clientele: heterosexual men whose favorite pastime was dressing and acting as women. A moving, insightful and delightfully entertaining new work based on actual events – by the winner of five Tony Awards.

Harvey Fierstein’s Casa Valentina had a relatively short run on Broadway in the spring of 2014, though it did get a best play Tony Award nomination. Inspired by the story of a real-life getaway called Casa Susanna, the play is stronger than its short New York life might suggest.  Or maybe it’s just that director Joseph Adler and the powerful cast of Casa Valentina at GableStage have found and illuminated all the sweet (and tender and tough) spots in Fierstein’s script.

Adjan and LeGette make for a powerful couple, she cheerfully accommodating, he the confident host/hostess with the most. Gradually, though, the playwright, actors and Adler reveal the cost of the couple’s ongoing bargain, and the play’s final image is a devastating one.

As the judge’s daughter, Patti Gardner has one small scene played with not-quite-controlled rage. Representing the voice of those who don’t understand, will never accept and believe themselves damaged by a loved one’s need, Gardner is stunningly powerful.

Props, too, to the rest of the “ladies”... Each of the nine actors and Adler make Casa Valentina a passport into a secret corner of life and history, one that’s all the more fascinating because of its real-life roots.

While the guests – most friends for years — initially bask in a mutually supportive environment where their closeted inclinations can be indulged freely, those aforementioned differences under pressure will drive them apart and destroy the Eden they have built.

These subtleties as well as the generous humor and rending tragedy are all beautifully excavated in GableStage’s production thanks to a committed cast led by director Joseph Adler. No actor winks that they are just portraying a character or that they are living out their own dream on stage. The cast under Adler’s hand are credible every moment in their affectionate camaraderie. The characters are not horsing around in frocks and lipstick; their inner selves have been released. That goes a long way toward a mainstream audience accepting what are outwardly and inescapably males wearing wigs and high heels.

Particularly fascinating in Fierstein’s script is how each man sees himself differently. Bessie sees herself and Albert as two people in a kind of marital relationship and forming a perfect balanced whole as in the best marriages. Charlotte is so completely a woman that her “real” name is never mentioned. When George is George, he refers to Valentina in the third person.

…Adjan deserves an extra hand for investing plausibility in Rita’s acceptance of her husband’s duality. She tells an inquiring Bessie, “I married George. I love George. Valentina is like an in-law.” Yet, their relationship is not rock solid either.

Costumer Ellis Tillman has produced period-perfect garb for both sides of each character’s personality, giving each a cherished dress that expresses each’s social standing and taste.

The production is not perfect. Several cast members were still getting comfortable with their lines opening night. That’s a problem because Fierstein gives many of them faux Oscar Wilde bon mots or has them hold forth with socio-political pronouncements, both of which feel a bit forced at times. But that will likely smooth out in time. Adler has deftly molded the entire undertaking, especially these individualized performances... Still Adler, Fierstein and company take us not just into a world most of us are not familiar with, but into questions of recognizing and accepting who we are, questions anyone can identify with.

…it’s not just Fierstein’s didactic writing that hamstrings the production. It’s also the patchy casting and uneven acting. Yes, the actors only had one preview performance, and yes, this is an ambitious mounting with nine actors, seven of whom required fittings for clothing of the opposite sex. But this may be the first time in my many years of covering GableStage opening nights that the show didn’t feel “ready.”

Standouts include an all-but-unrecognizable Cliff Burgess as the youngest, chicest Casa Valentina regular, possessing a casual self-confidence and the ability to make cigarette smoking look sexy again. As Jonathan, the resort’s uptight new visitor, Ryan Didato is responsible for the play’s emotional core; his self-actualizing transformation into “Miranda” is the production’s most touching moment. Ellis Tillman, GableStage’s consummate costume designer, meets the challenge of fitting a closetful of women’s frocks, wigs and jewelry onto men who have presumably never worn bras and booty boosters: They all look distinctive, with attire that speaks to their characters.

This show will certainly have its champions, but I’m not one of them. Considering GableStage’s specialty in cutting-edge theater, Casa Valentina seems off-brand. Where the company’s best dramas seethe with intensity and its best comedies lacerate with wit, this play succeeds as neither.