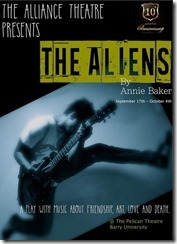 The Alliance Theatre Lab opened its production of The Aliens at Barry University’s Pelican Theater, through October 4.

Two angry young men sit behind a Vermont coffee shop and discuss music and Bukowski. When a lonely high-school student arrives on the scene, they decide to teach him everything they know. A play with music about friendship, art, love and death.

Some of Baker’s work has been described as Chekhovian — the characters are vividly drawn, yet not much happens — and The Aliens certainly falls into that category. Silences, pauses, numb staring are all woven into the fabric of the play, which doesn’t make for terribly compelling theater, at least as The Aliens is intially realized by director Adalberto J. Acevedo and his talented trio of actors.

Baker’s writing is certainly observant, amusing and sobering. KJ is a damaged guy who can be charismatic (if a bit scary) when he’s in a manic phase. Jasper seems to have talent, but a lack of focus and drive (and a weakness for other things) derails him. Evan, immensely watchable as played by Bikic, is both a kid who argues with his mom and an almost-grownup who grins over a recent rite of passage at summer camp.

The Aliens is not, like Baker’s The Flick, three hours long. But watching alienated youth sitting around talking makes the play’s running time feel longer than it is.

Director Adalberto “Albert” J. Acevedo (Juan Carlos Besares is credited as assistant director) have assembled a solid cast including Carlos Alayeto as KJ, Daniel Gil as Jasper, and Kristian Bikic as Evan. It took the trio a bit to get the momentum going at Friday night’s “gala” opening night, but Baker’s script isn’t easy stuff.

For those among us who enjoy going deeper than what’s presented on the surface (what Baker wants us to do in The Aliens) – the navel gazing and self-conscious loathing of Samuel Beckett and the existential leanings of Edward Albee – Baker’s pace will be a treat. For others, Baker’s The Aliens will be an exercise in head scratching and perplexed moments in the space of two hours of wtf?

Embrace it, and it’s sheer theater magic; resist it and it’s a few hours akin to watching paint dry. Baker herself, who has received much notice for the elongated silences, says that the technique works to make the audience become aware of itself, then they adjust to it, then they eventually find their way back into what she calls “the reality of the play.”

The Alliance Theater… and especially Acevedo deserve a big “A” for aspiration. Baker’s play is a challenging one. While the directing and acting work in so many aspects (save for the aforementioned “push the envelope, guys, and go for it!”), the set, stage direction and lighting detract from the performances.

The lighting design by Alekzander Sayers and Dominic Smith doesn’t aid in the passage of time or signaling the time of day... The design, however, does work magic depicting a July Fourth fireworks scene… Juan Carlos Besares’s and Jose Besares’s sound design and engineering is smooth with fireworks and summertime crickets chirping. Allison O’Neil’s costumes (she’s also credited as dramaturg) are perfectly slacker-fied…

In the acting department, Alayeto renders KJ, with his manly overgrown beard, dichotomous with his childlike ways... Alayeto’s character is the one mostly burdened with Baker’s silences and he stays in the moment creating the needed focus to make these long pauses work. Gil’s Jasper is the quintessential dreamer and resident philosopher. The likeability that Gil has infused into the character creates a well of compassion... Bikic’s “golly, gee whiz” approach to the naïve Evan serves to present a sharp contrast to the other characters and it’s a perfect choice. Evan is the one with most defined evolution and Bikic moves through the paces evenly.

Applause to thought-provoking and challenging theater. It’s like Bukowski said: “An intellectual says a simple thing in a hard way. An artist says a hard thing in a simple way.” (Notes of a Dirty Old Man, 1969) Amazingly, playwright Baker and this production of The Aliens achieves both.

Playwright Annie Baker won the 2014 Pulitzer for drama with The Flick and has won acclaim for her other work, including The Aliens, now opening the Alliance Theatre's tenth season.  Good for her, but at intermission on opening night at Barry University's Pelican Theatre, my over riding thought was: when does this play actually start? We'd been treated to some excellent acting by Carlos Alayeto, Kristian Bikic and Daniel Gil, Adalberto Acevedo's direction was just right, but it seemed nothing had happened.

Acevedo started The Alliance Theatre Lab in 2005 and has produced and directed some stunning work. What has always been evident is his ability to to get the very best out of relatively inexperienced actors. And he's done just that with The Aliens. These guys are good. Acting ten, writing three. Go see it.

Mirroring the slackaday inaction of its protagonists, The Aliens could accurately be deemed a play about nothing. Director Adalberto Acevedo's cast conveys the illusion of nonacting, and he paces the play like a 45 rpm record played at 33 1/3. Patient audiences will have plenty of opportunity to savor Baker's tumbleweed naturalism, the way her characters' selective aphasia takes them on linguistic roads to nowhere…

If there's a problem with the casting, it's that the actors look too close in age, so that Bikic seems less a sponge-like protégé to wayward mentors than a fellow traveler in a similar, if transient, life rut. There can be no fault in the performances, however: Acevedo's invisible hand expertly guides his cast through a singular vision and a clear understanding of Baker's alternately hyper- and hypo-realism.

Gil's enthusiastic excerpts from Jasper's facile novel, performed from his tabletop perch with the passion and physicality of a slam poet, conjure the lovable pathos his character needs. Alayeto plays KJ as Jasper's manic-depressive second fiddle, vacant when medicated and bristling with infantile spontaneity when not. His greatest moment is his character's understated catharsis, inspired by a childhood memory, in which he utters the word "ladder" enough times for the two-syllable noun to encompass a spectrum of intonations, meanings, and symbols (the two ladders in Acevedo's set design add a nice visual rhyme). Bikic finds at least two or three archetypes within Evan, cementing his character's arc from nervous boy to world-weary man as much through movement, gesture, and posture as through words.

It's possible that not everyone in the audience will believe that its paradigm-shifting surprise will justify the wait. But thanks to a production so palpably accurate, this intellectually rich portrait of a lost generation will surely connect with the disaffected terrestrials among us — and provide lucky aliens with a potent glimpse of a lonely planet.