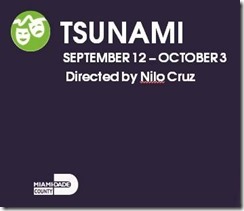 The University of Miami opened the world premiere of Tsunami at the South Miami-Dade Cultural Arts Center on September 12, 2015.

Tsunami is a poignant docudrama that introduces the resilient people behind the front-page horrors of the 2011 Japanese earthquake and tsunami disaster. These transformative stories, presented by a variety of actors from different cultures, portray unforgettable tales of survival, magic, and a heightened reverence for life. Written by Nilo Cruz & Michiko Kitayama Skinner.

Pulitzer Prize-winning playwright Nilo Cruz, born in Cuba and raised in Miami, and stage designer Michiko Kitayama Skinner, a University of Miami theater faculty member who grew up in Japan, are global artists who dive deeply into myriad cultures in the course of their work. Their collaborative docudrama Tsunami, which is now getting its world premiere at the South Miami-Dade Cultural Arts Center, demonstrates their attention to cultural detail and their desire to communicate broader themes.

As he has demonstrated in staging his own work at Miami-Dade County Auditorium’s On.Stage Black Box, Cruz is a director skilled at conjuring dramatically poetic visual imagery. For Tsunami, he utilizes Brechtian and Asian theater styles in an episodic 90-minute piece that, thanks to Kitayama Skinner’s evocatively simple design and Eric Fliss’ beautiful lighting, is often visually stunning. Sound designer and composer Erik T. Lawson contributes subtly atmospheric music, the sound of a lapping ocean, the scene-shifting signal of a stick drum.

The barefoot actors incorporate a style and movement that serve Tsunami without stealing the rich vocabulary of Kabuki theater. The Cuba-trained Barbosa, youthful and playful, delivers the most memorable performance and best utilizes the show’s physical style. The handsome Falcon has a heart-breaking gravitas as he speaks of the tour guide’s missing love. Musgrove impressively transforms from a fire fighter to a Buddhist monk to the thoughtful gardener — even briefly portraying a woman whose dead husband won’t let her get a wink of sleep. Prayz shines brightest as the tradition-proud lion dancer, Burke as a new widow, McCain as a grieving mother experiencing a miracle.

Tsunami is unlikely to have the enduring impact of a riveting docudrama like The Laramie Project or of Cruz’s original dramas... But in a place where such disasters have happened — and will inevitably happen again — it serves as reflection and reminder. And as a lovingly wrought statement about hope and resilience.

…Tsunami, the world premiere by Miamians Nilo Cruz and Michiko Kitayama Skinner, a moving work of glorious theatricality that no other art form can duplicate.  This melding of movement-infused acting with superb designs of lights, shadow puppetry, sound, costumes, sets and projections grace the black box space at the South Miami-Dade Cultural Arts Center.

Cruz has alloyed a half-dozen disciplines with a harmonious synergy in sync with his vision that result in tableaus of sight and sound that no one else could bring to his script.

The triumph of the six-member cast portraying 14 characters is they create an imperfect stoicism that allows the audience to see the kaleidoscope of emotions flowing under the cauterized surface. While that pacific impassiveness may seem strange, these are storytellers relating events that occurred a year earlier; they have had time to develop mechanisms for bringing the pain under control.

…artful projections by Dinorah de Jesus Rodriguez depict real Japanese citizens played across Japanese calligraphy.  Then there is the soundscape by Erik T. Lawson. Along with the persistent sounds of now-gentled waves, the venue is awash in a mixture of new age music with clacking Japanese wood blocks, far-off bells and electric piano notes reminiscent of random raindrops falling after a storm has passed.

We’ve unfairly left until late the inestimable contribution of veteran designer Eric Fliss’ lighting... His work here — sometimes delicately dappled, sometimes searchlight harsh – ranks as some of the loveliest, deftest and evocative lighting seen in the region in some time. But crucial is how well-integrated it is with Kitayama Skinner’s set design and Cruz’s staging. It enhances them to the point that the show would not work half as well with less skillful illumination.

Tsunami is a production of the South Miami-Dade Cultural Arts Center (and therefore the county government’s cultural department) with support from the University of Miami Department of Theatre Arts and Arca Images, a small Miami-based troupe led by Artistic Director Cruz and Executive Production Director Alexa Kuve.

This is the kind of multi-disciplinary highly theatrical offering that is not seen often in Broward and rarely in Palm Beach County theaters. But it is worth a drive to this venue so far south to immerse yourself.

The University of Miami presents Tsunami at the South Miami-Dade Cultural Arts Center through October 3, 2015.