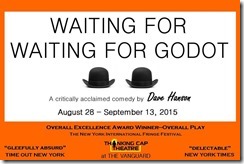 Thinking Cap Theatre opened its production of Waiting for Waiting for Godot at the Vanguard on August 28, 2015.

Don't miss the Southeastern Premiere of this hilarious backstage comedy about two understudies waiting to go in a production of Samuel Beckett's modern classic Waiting for Godot.  Written by Dave Hanson, a former joke writer for Late Night with Chelsea Handler, this new work premiered at the New York Fringe Festival in 2013 and swept the festival, winning Best of the Fringe.

Dave Hanson’s artful parody, Waiting for Waiting for Godot, won acclaim at the 2013 New York Interrnational Fringe Festival. The play is now getting its South Florida premiere at The Vanguard, courtesy of Fort Lauderdale’s Thinking Cap Theatre. Here’s betting that anyone who knows Godot, loves comedy and/or has worked in theater will adore it

Hanson’s play is embedded with references to Beckett’s, of course… But Hanson is also poking fun at the rituals and practitioners of theater itself. That’s the source of the clever comedy in Waiting for Waiting for Godot, and under the gracefully astute direction of Margaret M. Ledford, Duncan, Wilson and cast mate Vanessa Elise use their vividly rendered characters to affectionately deconstruct a life in the theater.

Duncan’s Val is quiet yet sly, a foil who suffers a loss but emerges the stronger man. Wilson goes all in with Ester, the fool who doesn’t see his folly. Mimicking Marlon Brando, he achieves a vocal and physical tour de force as he references A Streetcar Named Desire, The Godfather, On the Waterfront, Scarface, The Wizard of Oz and King Kong in mere minutes.

Elise makes several short but impactful appearances as Laura, the production’s assistant stage manager. It’s a job she views as far more important and difficult than the work of actors...  She then turns the calling of lighting cues into memorable high drama.

With its cluttered “backstage” set by Alyiece Moretto, lighting by Eric Nelson, sound by David Hart and Godot-appropriate costumes by Nicole Stodard, Waiting for Waiting for Godot is a kind of laugh-filled love letter to those who wait in theater. It doesn’t aim to be profound like its model. But in its more modest way, it’s similarly full of truth.

Sartre, Kierkegaard, Dostoyevsky, Nietzsche. Who among them knew that existentialism could be darn near hilarious? Who among them imagined a third-rate actor impersonating a feral gorilla performing snatches of Marlon Brando’s greatest hits between ferocious grunts?

Hanson’s script, a success at the New York Fringe Festival in 2013, is endlessly clever with a score-and-a-half direct references to the original play from the first line (and oft repeated here), “Nothing to be done,” and all the way to the finale that mirrors Beckett’s script– until the final crucial moments.  You don’t have to know the play very well, if at all, to enjoy this production, but the more you do, the more ingenious you will find it, down to the ongoing disagreement on how to pronounce Godot.

Because just as Beckett’s Vladimir and Estragon are most successfully played as clowns by skilled comedians, Thinking Cap and Ledford have hired two similarly gifted actors in Wilson and Duncan. They seamlessly meld comic and dramatic chops in intricately crafted moment-by-moment performances, all of it molded by Ledford.

Wilson, who was mesmerizing as the tent revival preacher in Thinking Cap’s Church last season, embodies Ester’s overblown ego barely disguising an eternal battle to maintain his sense of self-worth when everything in the world conspires to deflate it. His gorilla/Brando act, which ends with a tableau from King Kong, is the standout take-away memory of the evening as he unintentionally satirizes all the self-important blather that so many theater practitioners indulge in. His Ester is both hilarious and pitiful at the same time as his eyes dart all over the place trying to spot another sling-and-arrow in the offing while still hopeful for a laurel.

…Duncan is step for step just as fine in the quieter role of the earnest Val. He seemingly channels Stan Laurel, creating a self-effacing, good-hearted guy who is nearly in awe of Ester’s seeming self-confidence and “experience.” His shy smile and his confused eyes are applied expertly to provide silent commentary on Ester’s ravings. And watch his for his terpsichorean break.

Frequently, we praise an actor who is so good at submerging his considerable craft that we don’t “catch him acting.” But this is just as true, perhaps more so, of Ledford who is simply one of the best directors in the region, proven over and over from Naked Stage’s The Turn of the Screw to Mosaic’s Collected Stories. Ledford is so skilled that we don’t “catch her directing” despite a surfeit of inventive staging, precise pacing and an ability to get these performances from her cast.

And a nod to Elise, who was so funny as the maid in Zoetic Stage’s Clark Gable Slept Here. She plays a hyper-efficient assistant stage manager who is singularly unimpressed with the acting profession, which she claims (and demonstrates) isn’t so hard.

The tech team is also bringing their A game. Eric Nelson’s lighting design is unusually fluid for a small venue and makes its own comic comments on the action. Scenic artist and set dresser Alyiece Moretto has created a classic environment featuring the hodgepodge detritus of the current and past productions… She has scattered ladders and steps across the stage to give Ledford opportunities to keep the two men from being on the same level all night.

Rod Stafford Hagwood was sent by The Sun-Sentinel:

Show biz, an old-fashioned idea not worthy of even a hashtag these days, is both skewered and honored in the fast and funny send-up "Waiting for Waiting for Godot."  The comedy, being staged through Sept. 13 at the Vanguard in Fort Lauderdale by Thinking Cap Theatre, is a wickedly witty backstage comedy where two understudies wait for their turn in the spotlight during a production of Samuel Beckett's absurdist classic "Waiting for Godot," a production we can hear taking place just on the other side of a velvet curtain.

Director Margaret Ledford has shaped, molded and paced "Waiting for Waiting for Godot" to perfection. She allows it to retain its wild and wooly nature without ever feeling as if the whole thing might descend into ennui, especially when nothing in particular appears to be happening.

The cast here is having a blast, reveling in their roles. Even Vanessa Elise as the assistant stage manager makes an impression with a smallish role that, in her hands, becomes something else altogether. It's closer to a special guest appearance or a star cameo.

It's a big, fat, glorious, two-act inside joke that's playing now at Thinking Cap's Vanguard space in Fort Lauderdale. If you've ever wanted to be a ham, stunning your friends with the brilliance of your worn Willy Loman or the savagery of your Medea, auditioned all over town for the chorus of Hello Dolly and tapped for 42nd Street, you'll get every one of the approximately twenty-three hundred gags in Waiting For Waiting For Godot. And knowing who's Ollie and who's Stan will also help.

Buffoonery rules in the cleverly cluttered room. Raging egos, failures and triumphs, arrogance and humility, all the spoutings of the true artist and the teaching clichés of those who can't are mercilessly thwacked with the rubber chicken. It's brilliant work by the two actors. Broad comedy at it's best. And, every now and then, the sadness of frustration seeps through.

Director Margaret M. Ledford has her actors explore every line and move, with hilarious results. It's a wonderfully frantic piece... no two show days for these actors.

The Thinking Cap Theatre production of Waiting for Waiting for Godot plays at the Vanguard through September 13, 2015.