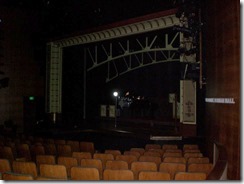 And lets’ be honest; we got a little lazy over the summer, so there are a number of stories that we didn’t get around to posting before.

So it’s time for another installment of Mondays Are Dark, your weekly reading list of news stories of relevance to theatre in South Florida.

South Florida Shuffle
For a while, it seemed that companies were closing, and we were just waiting for the next one to fall.  But all that’s changed as the economy turns around.  In Palm Beach, The Shiny Sheet reports that Palm Beach Dramaworks is adding a stage, Florida Theater On Stage reports that The Naked Stage is building a facility across the street (more or less), and FTOS also reports that Marquee Theater Company has moved into the West Boca Performing Arts Theater (West Boca High School, to the world at large).

West Boca was home to Slow Burn Theater – where are they?  Broward County.  The Miami Herald brings us to speed on all the action there, Slow Burn Theater has partnered with Broward Center to move into the Amaturo Theater, Outré Theatre has rented the Abdo New River room as its new base. Thinking Cap and Infinite Abyss have built new venues, and Island City Stage has found a larger space.

Not to be forgotten, The Sun-Sentinel reports that The Playgroup LLC has settled in to the Willow Theater, which became available when Keith Garrson dissolved the Boca Raton Theater Guild to take over the Theatre at Arts Garage with Genie Croft.  Meanwhile, The Miami Herald, The Shiny Sheet, and Florida Theater On Stage report that Louis Tyrrell (who founded the late Florida Stage as well as the Theater at Arts Garage) will launch Theater Lab at FAU.  It’s more of the same, which is to say it’s all new plays that you haven’t seen before, but will probably see again.

No link on this one, just the sad news that this past Friday was the final installment of the South Florida Arts Beat on WLRN.  Host Ed Bell has been a tremendous voice for South Florida Theater, and it will be missed.

The Miami Herald notes that Gablestage will be hosting a benefit performance of Disgraced for the ACLU, that Actors’ Playhouse will be opening The Toxic Avenger, that the African Heritage Cultural Center will be staging Zooman and the Sign (directed by John Pryor), and Cindy’s Spirit will be playing this weekend at the Emma Lou Civic Center in Pompano Beach.

The Sun-Sentinel reports that Palm Beach Dramaworks will once again be hosting its series Dramalogue – Talking Theater on Mondays starting in December.  Top professionals are interviewed on stage, with a Q&A with the audience. Local professionals include Joe Adler, David Arisco, William Hayes, and J. Barry Lewis.  National professionals include Tommy Tune, Paul Gemignani, and William Ivey Long.  TRIVIA HIT: William Ivey Long did the costumes for Dangerous Music at the Burt Reynolds Jupiter Theater back in 1989.  Already a Broadway designer, he’s collected a shelf of Tony Awards since them.

We would be remiss if we didn’t mention this Miami Herald article on the venerable Iris Acker, a pillar of the South Florida theatre community.

… in Coconut Grove, the Playhouse is still closed.  But former Artistic Director Arnold Mittleman wrote a letter to The Miami Herald to remind us that it existed.   Since many people hold him responsible for its failure, that demonstrates more than a little chutzpah on his part.