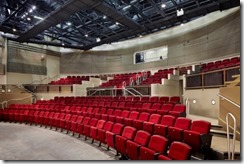 Another Monday.  It was a busy weekend, with plays opening and closing across the region, and of course, Broward County’s being hundredth anniversary party attracted throngs of nearly a dozen people.  Which meant there were lots of seats at the Ikea Lounge, and the lines for drinks were nonexistent.

We’re bringing back the featured theater photo: this week’s theater is Palm Beach Dramaworks.  Originally a movie house called the Florida Theater, the space has been home to The Stage Company, The Florida Repertory Company, The Burt Reynolds Institute for Theatre Training, and The Cuillo Center.  The only survivor through all of that is the door to what was the lobby telephone booth, which now serves as a closet.

The Palm Beach Daily News joined Bill Hayes and the cast of Picnic as they enjoyed an ersatz picnic.

Behind the Hullabaloo pub on Clematis Street in West Palm Beach stands an Airstream trailer, gutted of its innards, decorated with seascape murals and flamingo string lights and cooled by air conditioning.   On a recent evening, the trailer was crammed with the cast of Picnic, Palm Beach Dramaworks’ season-opener. They munched pulled-pork sandwiches, artichoke fritters and other goodies and generally lived it up after a hard day of rehearsal at the theater in West Palm Beach.   “The whole idea was to be social and get to know each other quickly,” said Producing Artistic Director William Hayes amid the din. “This is the Florida version of a picnic, since we can’t be outside because of the rain and heat.”

The Miami Herald, Palm Beach ArtsPaper, and the Broward/Palm Beach New Times have published their season outlooks, now that the new theatre season is here.

Opening or Playing this week.

The Sun-Sentinel brings us up to speed on Once, the first Broadway tour of the season, opening at the Broward Center for the Performing Arts this Tuesday.   The Miami Times reports that Zooman and the Sign is open at the African Heritage Cultural Arts Center, but you’ve only got until Sunday to see it. And the Miami Herald also looks at this week’s highlights.

The Adrienne Arsht Center hosted a summit on accessibility and the arts, and Miami ArtZine was there.

The Huffington Post examines the surprising relevance of a 2,700 year old play, while the Chicago Tribune reports on Goodman Theatre’s first all-female group of playwrights.  Meanwhile, American Theater Magazine lists 82 companies that have made female playwrights a priority.

HowlRound hosts a discussion between Samuel French, Inc. and four theatre professionals on the subject of diversity in American Theater.

n recent months, there has been quite a bit of online ink spilled on the subject of “diversity” in the theatre. Whether it’s Roundabout Theatre Company’s all white revival of Noises Off or Manhattan Theatre Club’s recently announced 2015/2016 season of nearly all white male playwrights (now including one white female playwright as a late addition), commercial theatre gatekeepers are now being put into the position of having to reflect upon whether they are at best, perpetuating an artistic culture of homogeneity or at worst, perpetuating an artistic culture of de facto racism.

It Can Be Done

Vox.com discusses the the hit musical Hamilton with its creator, Lin-Manuel Miranda.

"Our cast looks like America looks now, and that’s certainly intentional. … It's a way of pulling you into the story and allowing you to leave whatever cultural baggage you have about the founding fathers at the door."

Leaving A Light On

Atlas Obscura takes a look at the ghostlight, a fixture in almost every theater.

… In Coconut Grove, the Playhouse is still closed.  But the Coconut Grove Grapevine reports that stuff is happening.

“While you won't see much activity onsite itself, they are reviewing existing reports and making assessments as to how to move ahead. A structural analysis and updated survey of the building will allow them to make an informed decision on how to proceed with the preservation of the building.”

Of course, the poorly named “Save The Coconut Grove Playhouse” is still doing everything it can to ensure that theatre never returns to the Grove.