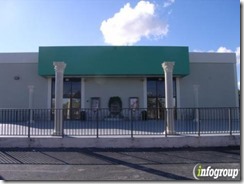 Another Monday, another reading list.  It’s a little sparse this week, but we think it’s just the calm before the storm; expect more next week, as the theatre season opens in earnest.

Today’s theater is the Stage Door Theatre in Margate.  We don’t have an interior shot, but this former movie house has two stages.  The company, formed in 1993, has also taken on a few satellite venues over the years, but this is their home.

Speaking of the Stage Door

Florida Theater On Stage breaks the news that Dan Kelly has been appointed Artistic Director.  Given the number of plays he’s directed there over the years, some of us thought he already was the AD.  Congratulations, Dan.

The Miami Herald did have the Dan Kelly story, too, and also fills us in on the doings of Tarell Alvin McRaney, a Jackie Wilson musical, and the latest from Lost Girls Theatre.

The Sun-Sentinel fills us in on the latest from Pigs Do Fly Productions.

The Guardian believes theatre companies need to diversify its talent pool to include more different folks.

The Miami Herald has a list of plays in New York City that feature South Florida natives.