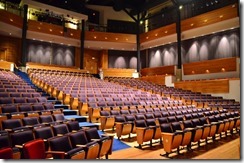 This week’s “dark” theatre is the Amaturo Theater at the Broward Center for the Performing Arts.  The renovation of the 588 seat theater marks the end of final phase of the updates to the venerable Performing Arts Center, and Slow Burn Theater Company will opening its production of Big Fish there this week.  It’s a new era for the company and for the Broward Center; hope you’ll be there.

Playbill reports that actors out in Los Angeles are suing Actors’ Equity Association for eliminating a contract category that allows union members to work at small, under-funded theatre companies at rates far below the usual minimum scale.  You can also read about it on Broadway World.

Oozing into the News

Reviews will start showing soon, but here’s an advance in The Miami Herald on The Toxic Avenger that opened at Actors’ Playhouse this weekend.

The Miami Herald reports that this will be a good season for those who like fresh new plays.  Meanwhile, Florida Theater On Stage has a season preview, and Bill Hirschman’s personal “don’t miss” list.

Florida Atlantic University is in the Theatre Biz

FAU’s Theatre Department is doubling down on the exposure garnered by their new Theatre Lab venture with Louis Tyrell, or so it seems in this article in Palm Beach Illustrated.  Back in the 1980s, you’d have found Hume Cronin and Jessica Tandy on the campus, or taken a masterclass with Zoe Caldwell.  It’s good to see them resurface as the wellspring they’ve been all along.

Yelp as Uber, or WTF Is Happening to Theater Reviews?

The LA Times tackles our own hobby-horse topic: the decline of professional theatre criticism.

…the time has come to broach the elephant in the newsroom: the decline in prestige and prominence of reviewers in their once oligarchic role as cultural arbiters

The Sun-Sentinel announces the retirement of Broward County’s tourism czar, Nicki Grossman, or as we know her, “Lissa’s Mom.”  She’s done a great job for Broward County over the last two decades.  She will be able to spend more time with her family, including her husband, retired Judge Lissa’s Dad.  Best wishes, Nicki; we couldn’t have done it without you.