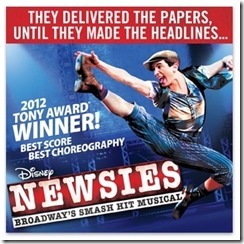 The national tour of Disney’s Newsies opened at The Broward Center for the Performing Arts on November 17, 2015.


Filled with one heart-pounding number after another, it’s a high-energy explosion of song and dance you just don’t want to miss. Based on true events, NEWSIES tells the captivating story of a band of underdogs who become unlikely heroes when they stand up to the most powerful men in New York. It’s a rousing tale about fighting for what’s right... and staying true to who you are.


Running at Fort Lauderdale’s Broward Center through Nov. 29, Newsies returns with some changes — a new leading man and leading lady, several others new to the cast — but Disney’s devotion to quality control pays off, as always. Visually dazzling, full of breathtaking (and Tony Award-winning) choreography and strong singing, the Jeff Calhoun-directed Newsies engagingly tells the story of a ragtag bunch of New York newsboys who bested bottom line-boosting publishing titans.

Christopher Gattelli’s choreography is, no exaggeration, spectacular. The show’s young male dancers are asked to tumble and flip and practically fly, and the stylish energy this bunch expends could light up Manhattan.

Barreiro, who graduated from UM in 2012, is a charismatic leading man whose rich voice communicates the yearning of Santa Fe and the burgeoning romance of Something to Believe In, Jack’s duet with Katherine. Even when he’s singing numbers from the Alan Menken-Jack Feldman score, the Miamian sounds New York born-and-raised.

Keene, who looks very pretty in Jess Goldstein’s colorful period costumes, is a performer with a sweet voice and the chops to pull off Katherine’s patter song Watch What Happens. Initially, her line readings are a little odd and mannered, but once Katherine becomes involved in covering the strike, Keene is more believable.

Among Jack’s newsboy crew, Zachary Sayle is memorable and moving as Crutchie, Stephen Michael Langton is an inspiring Davey, and young Ethan Steiner (who alternates in the role with John Michael Pitera) is a completely adorable scene stealer as Les, Davey’s brother and the littlest newsboy.

…whatever your age or gender, if you’re a fan of razzle-dazzle musical theater, Newsies delivers.


Moxie. That's what Disney's Newsies has. Moxie. And plenty of it. It's an old-fashioned word, but it fits. This is essentially an old-fashioned show, filled with throwback Bowery patois and the kind of zesty dancing that James Cagney favored. Coming at you while firing on all cylinders, and with that signature Disney discipline, the road tour of the musical is a blast of a Broadway show.

…that story is craftily visualized, making fine and strategic use of projections against three whirling, iron gridwork towers that suggest the tenements of New York's Bowery at the turn of the 20th century.

But as impressive as all that flashy tech is, there are some beautiful still moments in the show, such as when Barreiro and Keene are wailing away in their love duet on the "rooftop." The scene could be a real eye-roller, but the two actors invest something in it, a certain indefinable something that makes the whole thing ring true.

…it must be said, the real star of Newsies is Christopher Gattelli's jaunty, airborne choreography. The leaps, pirouettes, somersaults, backflips and tumbles keep coming at breakneck speed (for two hours and a 15-minute intermission) and with an impressive derring-do topspin to them. A show either has that powerful pizzazz or it doesn't. There is no proxy for that kind of moxie.


It is obvious why Disney's musical, Newsies won the Tony award in 2012 for best choreography. For two solid hours, fifteen or more performers dance in unison to some of the most physically demanding dance routines seen on a stage. There are tap numbers done in unison that rival "Riverdance," as well as tumbling and other acrobatic displays. The non-stop stage movement is performed on three three-tiered unit sets that resemble fire escapes, and rotate even while the performers are dancing.

Joey Barreiro playing Jack Kelly and Morgan Keene in the role of Katherine are the romantic love interests. Both have strong singing voices in their solos as well as duets, and they both can dance too. Zachary Sayle also delivers a solid performance as Crutchie, the disabled best friend of Jack who is sent back to The Refuge, a workhouse for homeless teens.

The only real drawbacks to this production are the fight scenes directed by J. Allen Suddeth, which are never convincing or realistic and the orchestra which was much too loud, in the first act especially, making it difficult to understand the dialogue and the lyrics.

That aside, Newsies is a Broadway show that the whole family can enjoy as evidenced by the children in the audience on opening night. In addition, for theatre goers who like to see lots dance in their musicals this show is the one to see.


As a musical based on a true event, the 1899 strike of the kids who hawked the local papers, the opportunity for empathy and understanding seemed ample… That the empathy never evolved for me is due to the fact that there are clichés upon clichés thrown at us as fast as the headstands, pirouettes, and great leaps occur time and time and time and time again in the overly redundant choreography. Luckily, Tony winner Christopher Gattelli's creations are danced by a thrilling group of male dancers. If several of them appear a tad, ahem, more adult than the other kids, their sheer exuberance and talent shine through.

Technically, the trio of steel towers, designed by Tobin Ost, move as they should without incident. Unfortunately, sound is a major issue. From my perfect seats in the 16th row center of the orchestra, I could understand not a word when the newsies were singing in unison. Add to the mix that each chorale sounds exactly like "Solidarity" from Billy Elliot. The costumes by Jess Goldstein are wonderfully of the period…

It's interesting that the supporting characters stand out as much as they do, especially Crutchie, played by Zachary Sayle; Wiesel, played by Michael Gorman (along with several other roles); and Teddy Roosevelt, played by Kevin Carolan. Carolan brings a true characterization to a role that could easily have been caricatured. Director Jeff Calhoun repeats his Broadway duties. His leading man, Joey Barreiro, channeling John Travolta from several of his dese-dem-dose-type roles, is charming and self-effacing, and manages to win over the audience with grace and style.

The national tour of Disney’s Newsies plays at The Broward Center for the Performing Arts through November 29, 2015.