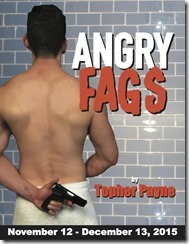 Island City Stage opened its production of Angry Fags at The Abyss Theatre on November 12, 2015.

This explosive play, which was recently produced at the Garage at Steppenwolf Theatre in Chicago, is an uncompromising Oscar Wilde-meets-Fight Club fantasia” about how good ideas go bad, with fascinating forays into American politics, bomb building and pistachios. The play follows Bennet, a speechwriter for Georgia’s only gay congresswoman and his roomate Cooper as their fear and frustration turn to rage after the killing of Bennet’s ex. They come to the conclusion that “acceptance” as second class citizens isn’t enough and they quickly morph into a gay Thelma and Louise wreaking havoc with unintended consequences.

It may be that, somehow, a gifted playwright could answer those questions in a compelling way. Payne isn’t that playwright, and Island City Stage’s season-opening production of Angry Fags can’t disguise that fact, despite the considerable efforts of director Andy Rogow, his cast and the creative team.

Neither successful satire nor theater of the absurd, Angry Fags asks its actors to go from bantering about Steel Magnolias and the appeal of the McRib sandwich to carrying out pragmatic or strategic executions.

Of all the actors, Porro is the one who makes it through Angry Fags unscathed (though the same can’t be said of Kimberly). She brings warmth and goofy humor to her early scenes, then makes a thoroughly convincing turn into terrified despair.

Costume designer Peter A. Lovello, lighting designer Preston Bircher and sound designer David Hart do their usual fine work. This time, though, it’s not in service of a play worthy of their talents.

Steel Magnolias may work better as a play, but would Die Hard? As one character asserts, “You can’t do action onstage.” Island City Stage’s movielike production of Topher Payne’s savage satire will attempt to refute this over the next two and a half hours, which will see bombs detonate, poisons dispensed, indigents bludgeoned, coworkers Tased, and lethal gunshots fired, all of it realized with the aid of George Wentzler and Mark Demeter’s ever-changing video projections and David Hart’s crucial sound design.

The savvy integration of this immersive technology represents a cutting-edge turning point for this esteemed company, which, in its $30,000-renovated new home at Infinite Abyss space south of Five Points in Wilton Manors, has also produced its first multi-level set. These bells and whistles go a long way in elevating Angry Fags, but the play still suffers from elephantine pacing and a sense of crippling logorrhea. A good trim of Payne’s mammoth, overstated treatise is more than just judicious; it should be required by any company endeavoring to produce it.

Satire works best when it is distilled and unwavering, and Angry Fags is in desperate need of a dramaturgical finesse. Payne tries too hard to cram too much into the play, which attempts to address every issue facing contemporary gay identity and nearly drowns in its earnest sanctimony. It crackles, finally, when the gravity of Bennett and Cooper’s machinations reach the point of no return, providing a visceral showcase of wordless panic from Porro, whose performance is the show’s most convincing.

Even so, Island City’s production finds notes of poignancy and wit throughout. Bennett’s moving visit to his dying ex-boyfriend’s bedside is deftly complemented by the unfeeling soundscape of life-support machinery clunking and hissing. Peter Lovello’s costume design includes a hilarious T-shirt for the flamboyant Cooper, an image of Mister Rogers with the text “I wore cardigans before it was cool.” When Cortada’s right-wing zealot returns to her office with takeout food, the logo on the bag is, naturally, Chick Fil A.

The play "Angry Fags" probably looked great on the page… But from the page to the stage, something happened. Or, to be more accurate, something did not happen. Playwright Topher Payne just can't find the right vibe or tone, or pull together his temerarious script enough to weather the second act. What should feel like a punch ends up more like a flick.

Much of the dialogue crackles with electricity, and this cast is savvy enough to know how to make that work for as long as they can. But eventually, as "Angry Fags" drags on for two hours, with a 15-minute intermission, the play loses its flow and momentum. The play admirably takes on big themes, but it just can't seem to wrestle them into coherence, as "Angry Fags" goes from "Will and Grace" to "Dexter."

There is much to recommend Island City Stage's production of "Angry Fags" at the newly renovated Abyss Theatre in Wilton Manors… Billed as a comedy, the play does not disappoint, often delivering the laughs in spite of the fact that the plot is improbable at best with a myriad of twists and turns.

Director Andy Rogow's pacing and blocking in the piece are on the money, quickly transitioning from scene to scene effortlessly. There are, however, so many scenes that the play becomes laborious in its film-like quality… Additionally, the thematic through line becomes muddied up, trying to highlight too many disparate topics... Playwright Topher Payne could have made better use of a red pen in editing the piece… That said there are more plusses in the show than minuses…

The acting styles don't share a common thread, but each actor commits to the choices he or she makes. Ross is the most successful in treading the fine line between comedy to tragedy. His is adorable in his scenes of flirtation with Adam, a co-worker played convincingly by Jeffrey Leshansky and moving during a monologue at the bedside of his dying lover, a scene in which David Hart's sound design triumphs by having the sound of a life support system represent the dying Sammy.

Kimberly Phillips is also able to navigate the narrow passage between the comedic and the deadly serious. She delivers some of the best one liners in the show…

Mary Jo Cortada as the compassionate conservative Peggy Musgrove, running for the state senate… successfully avoids turning the character into a stereotype. Her performance is nuanced and sincere.

…Tracy Cramer seems out of touch. Albeit his acting is quite naturalistic, his policeman lacks the undercurrent of a 'dog with a bone' tenacity that would make his purported intense interest in the case believable. On the other hand, Moody's portrayal of co-conspirator Cooper is so over the top, it also lacks credulity.

Preston Bircher, lighting director, has been given the onerous task of lighting for both the stage and the screen and as usual succeeds mightily. The scene design is not one of award winning Michael McClain's best. It seems hurried and unfinished. He does make good use of the space though, using levels and indicating multiple locations with furniture and the LED projections.

The plot "Angry Fags" with its emphasis on home grown terror ala Timothy McVey may not be everyone's cup of tea, especially in light of the recent acts of terror around the world, but it marks the continuing success of a long awaited theatre company dedicated to presenting plays highlighting gay themed issues.