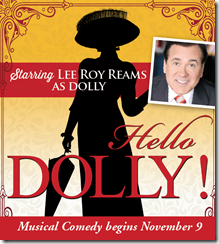 The Wick Theatre opened its production of Hello Dolly! on November 5, 2015.


"And what do you do for a living, Mrs. Levi?" asks Ambrose Kemper in the first scene of this most delightful of musical comedies. "Some people paint, some sew... I meddle," replies Dolly. Hello, Dolly! is full of memorable songs including "Put On Your Sunday Clothes", "Ribbons Down My Back", "Before the Parade Passes By", and "Hello, Dolly!". Come along as we follow the adventures of America's most beloved matchmaker!


Some people will be unable to let their imagination meet the production halfway even though they’re willing to ignore the cables that make Peter Pan fly. Some will come in with a chip on their shoulder about the entire premise. Others will revel in the gay-friendly idea of a man in drag, à la Charles Busch, which is very much not what Reams has in mind.

Reams is, in fact, playing Dolly absolutely straight as an acting challenge with as much integrity as Brian Bedford playing Lady Bracknell. He rarely winks at the audience to acknowledge the obvious subterfuge.

So it’s not so much ironic as apt that the veteran song and dance man is most believable and most effective in the book scenes when the yearning widow is asking her dead husband’s permission to jump start her life. Reams’ ability to inhabit those profound emotions is deeply touching and perhaps superior to most performances you’ve seen of the role in that respect. Really.

Where the illusion vanishes, oh so sadly, are the big production numbers. For instance… the vision descending the staircase and sashaying around the Harmonia Gardens with adoring waiters was clearly a 73-year-old man of limited mobility... It really hurt to see Reams, one of the finest dancers on Broadway in Applause and 42nd Street, clumsily parading up and down the stage and taking a break to catch his wind. What saves such numbers is Reams seems to be having the time of his life performing a show he clearly loves and the audience members who want to go along for the ride are enchanted; the crowd went appropriately wild during the “Hello, Dolly” cakewalk.

Reams goes out of his way to make the part his own. He channels no one else, least of all his friend Carol Channing, who he directed in the last Broadway revival in 1995. The only shred of Channing, and it may be unconscious, is in the opening number when he sings certain protracted words like “lives” with that unique Channing bray. Otherwise, this is Reams’ take on the part, once again, powered by his belief in the emotional underpinnings of Stewart’s book.

Past the Reams-as-Dolly issue, the Wick production is surprisingly solid and entertaining, especially given it survived more than its share of backstage troubles and logistical challenges.  If the show rarely soars into magical territory, Reams the director can be proud of molding a truly talented crew of performers in an energetic and appealing edition that does full justice to Jerry Herman’s still thrilling score and Michael Stewart’s deftly constructed script.

It also helps that key cast mates have done the show before with Reams, including tall handsome James Clow whose glorious baritone as Cornelius Hackl is a vocal highlight of the show…  and Susan Powell… who trills Irene Molloy’s lovely “Ribbons Down My Back.” They are completely in sync with Reams’ vision that Dolly is all about tossing off the shackles of calcified convention and embracing the adventure that life can be in a phoenix-like resurrection.

But the finest performance comes from veteran Broadway actor Lewis J. Stadlen, who is arguably the funniest Horace Vandergelder we’ve seen... His creation of the curmudgeonly small-town merchant prince is clearly in a class by itself in this production with every furrowed brow, every ten-penny nail-chewing utterance and the drily delivered precision punchlines of a vaudevillian of yore.

A live band was replaced with lush recorded tracks shortly before rehearsals started, but musical director Michael Ursua is present at performances conducting the singers and playing a live piano at times. The singers under his leadership cannot be faulted.


It's hard to tell if that whole cross-dressing turn makes a difference here with this staging; Reams plays it straight, so to speak. And even if you can somehow mentally extract that from the equation, this version is also directed by Reams. So he is all over the show one way or the other. And in that regard, as the helmsman, he has given the 51-year-old musical a sense of briskness and brightness with some triumphant choreography by Randy Slovacek and wow-pow moments courtesy of musical director Michael Ursua.

The story follows strong-willed matchmaker Dolly Levi as she travels to Yonkers, N.Y., to find a match for the miserly "well-known unmarried half-a-millionaire" Horace Vandergelder (Lewis J. Stadlen, putting a new luster to the old bluster and the best surprise of the show).

There are some sequences in the two-hour show, with a 15 minute intermission, that come off as under-rehearsed and clumsily executed.  Whatever. All is forgiven when Reams/Dolly hikes up his/her skirts, swishing them back and forth to beat the band. Or when the chorus fills the stage, high-kicking and belting as if their lives depended on it. Who knew you could still get a rush from an ole chestnut like "Hello, Dolly?"


There has been a tremendous amount of publicity surrounding the casting of Lee Roy Reams as Dolly Levi in Hello, Dolly!. "The first man in the states to play the role," etc. Sometimes a great notion does not exactly "gel."

He is not only starring in the production but directs it as well. I was reminded of the old adage, "a lawyer who defends himself has only ... etc. etc." In the book scenes, Reams touchingly acts the pathos of Dolly vis a vis her late husband Ephraim, but very surprisingly, in the musical numbers his portrayal falls flat. Lee Roy Reams is "Mr. Broadway": he was a hell of a dancer, a great belting tenor, and lots of fun to watch on stage. He (usually) has given 200% while performing. I saw the opening performance, and the night before he had fallen down the onstage stairs. I am crediting his faulty movement on stage and some hesitancy on his lines to that mishap, and know that this trouper will find "the Dolly within."

…the show belongs to Lewis J. Stadlen, who brought the house down at the curtain call. He seems to be channeling the late David Burns as well as W.C. Fields. His grumpiness, tempered with an odd sweetness is endearing. He is, by far, the greatest Horace Vandergelder I have ever had the pleasure to have seen.

…the most delightful performance is given by petite Idalmy Carcache as Minnie Fay. A firecracker, she dances like a dream and brings energy to the millinery scenes (which have always needed a little boost). Susan Powell, Miss America 1981, looks great and sings a beautiful "Ribbons Down My Back" as Irene Malloy, and James Clow as Cornelius makes a handsome beau for her. Jason Edward Cook is a ball of adorable energy as Barnaby and the most polished dancer of the principals.