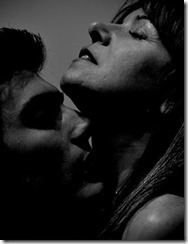 Theatre at Arts Garage kicked off their new season with their production of Laura Eason’s Sex with Strangers on October 25, 2015.

When someone’s existence can be entirely fabricated online, we ask: who, exactly, is lying in bed next to us? Olivia, a 40-something writer in Chicago, unexpectedly encounters the younger, sex-blogger Ethan, but questions about his past take their relationship through a series of comic and surprising turns.

The play lands solidly because Eason has an ear for electric-blue romantic banter, a head for brainy issues, R-rated dialogue and an unusual meld of compassion and sophistication about relationships in the current zeitgeist.

But what likely makes it work on the stage are the engaging and always credible performances from Michael Uribe and Jacqueline Laggy, molded by director Genie Croft. They seem real people whose love for creation spurs them to dorm room debates, rather than two-dimensional spokespeople for viewpoints Eason wants to explore.

…Uribe radiates the hyperdrive energy needed to propel this show which is primarily two people talking a great deal moments before succumbing to an almost magnetic need to begin taking each other’s clothes off... Without alienating the audience, Uribe persuasively inhabits a young man born into this culture, someone who doesn’t imagine let alone question the ethics of manipulative practices in selling art.

…Laggy is just as compelling... Her Olivia has been as deeply wounded by the lackluster reaction to her first novel as if she had been abandoned by a lover. Laggy exudes that wonderfully brittle way with banter that evokes an intelligence as lovely as the woman herself. Anyone with an IQ would fall in love with her, and want to bed her, too

For such a talky show, Croft succeeds in keeping it moving as briskly as a speed date both in pacing and staging, plus she finds the tone of humor and emotion suffusing the script.

Under a new artistic administration headed by Keith Garsson, The Theatre at Arts Garage opens its new season with an attention-grabbing play called Sex with Strangers by Laura Eason, a staff writer for Netflix’s House of Cards.   While the title is hardly misleading — the opening scene and several others end with the play’s two characters ripping off each other’s clothes with mounting passion — Eason has plenty on her mind as well, like themes of identity, authorship, trust and emotional manipulation.

…we remain increasingly impressed by the two performers, who each display verbal and physical agility. Uribe, so compelling in Island City’s Little Dog Laughed last season, is completely convincing as the well-toned, self-assured cad, an alien creature to Olivia and all the more attractive to her because of it. Laggy, a fixture of the defunct Women’s Theatre Project and Parade Productions, has more of a performance arc to play, moving from mousy reticence to unbridled ambition.

Croft uses the space well, moving her actors about the two attractive, functional sets credited to Bombshell Productions. Sex with Strangers is smart, smart-mouthed and, yes, sexy, a very promising start for Garsson and company.

Arts Garage's "Sex with Strangers" takes the whole romantic comedy genre, shakes the dust off of it, beats some sense into it and then displays it, beautifully, on the stage at the performing arts space in downtown Delray Beach.

Laggy and Uribe make the most out of "Sex with Strangers," taking their time and finding a naturalistic tone despite the occasional emotional billboarding Eason does when her script gets ahead of itself. Laggy, who can project strong and fragile simultaneously, has a slouchy-sexy way about her and a slick sense of comedic timing. Uribe radiates a hunter-closing-in-on-game kind of thing, a Tom Cruise-like cold fusion intensity that sneaks up on you. The two of them together -- all those facets, angles and double-edges crashing against each other -- set off sparks.

…director Genie Croft has honed in… with clear, clean, laser-like focus: They each want what the other has.

Great writing, insightful direction and strong performances propel the production of "Sex with Strangers" now playing at Arts Garage. Tickets for Saturday night's show were sold out and playgoers turned away. The show is so popular that it has already been extended for three weeks starting December 5 at the Plaza Theatre in Manalapan.

…the sexual chemistry gets the better of both of them, and they begin an affair rife with twists and turns that are good enough for any mystery novel.

The cat and mouse game is finally resolved at the end of the play, albeit for one lingering question. This moment is perfectly timed by director, Genie Croft and beautifully navigated by Laggy. For his part, Uribe… plays just the right notes in his conception of the brash braggart who struggles with his need to be recognized as a legitimate author.

The moment he realizes Olivia is being lured by a prominent book publishing company, he can barely contain his jealousy. Uribe plays the moment with finesse; we can see the envy on his face and in his gestures but never hear it in his voice. It is a masterful moment of playing the subtext.

The Theatre at Arts Garage  production of Sex with Strangers plays at Arts Garage through November 15, 2015.  When links for the extension mentioned by Kathryn Ryan become active, we will update this page.