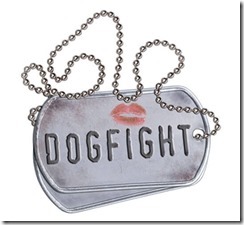 Slow Burn Theatre Company opened its production of the musical Dogfight at the Broward Center for the Performing Arts on November 12, 2015.

Emotional combat comes to life as morals, values, humility and humanity are explored and dissected. The winner of the prestigious 2013 Lucille Lortel Award for Outstanding Musical, this critically acclaimed Off-Broadway show, based on the 1991 cult classic movie, centers on the unlikely, yet poignant romance between a young Marine and a shy, awkward waitress he meets the night before shipping out to Vietnam in 1963.

With Dogfight, the Slow Burn Theatre team, which recently “christened” its new home in the center’s Amaturo Theater with an impressive production of Big Fish, continues to demonstrate the many reasons that the Broward Center has made the company one of its official arts partners.

Director-choreographer Patrick Fitzwater and his creative collaborators — musical director Emmanuel Schvartzman, set designer Sean McClelland, costume designer Rick Peña and lighting designer Becky Montero — have transformed what is really a banquet space at the center into a space that serves the musical.

McClelland’s multi-level set, sporting faux militaristic metal and camouflage, adapts for smaller scenes set in 1963 San Francisco…Richard Szczblewski’s sound and the vocal blend were impeccable, even when some of the actors were onstage and others were standing among the tables where the audience sits. And from Slow Burn veterans and newcomers alike, Fitzwater draws strong performances, character-appropriate movement and the fine singing that is another of the company’s hallmarks.

The cast… is a strong, cohesive ensemble. Benitez sports a very unfortunate wig but is otherwise compelling as a young, inexperienced woman who stands up for herself but keeps an open mind — and heart. Zenoz, whose Eddie swears up a storm early on, walks the fine line between being a user and being ashamed of his actions, coming home broken but open to reclaiming an all-too-brief joy. The two young actors are appealing leads.

Dogfight earned attention from Fitzwater who – with a couple of compelling discoveries in the leading roles – has mounted the show with his signature energy in the Broward Center’s Abdo New River Room.

Its appealing score ranges from a 1960s pop sound to ersatz Sondheim, with lyrics that brim with emotion... Nevertheless, the show’s central relationship between a young Marine soon to ship out to “this little country near India they call Vietnam” and a gullible, insecure diner waitress defies the minimal credibility of a musical.

Although the performances can only partially counteract the plot, Fitzwater has another standout discovery in Benitez. She brings a touching vulnerability to Rose, a wounded bird who nevertheless has a powerful singing voice…

Zenoz… tries to muster some sympathy for Eddie, but at least demonstrates vocal force from his opening number with his Marine buddies… Mike Westrich – the production’s sole Equity performer – and Christian Vandepas lend solid support as Eddie’s sidekicks, while Alexa Baray needs to dial back the stridency as a hooker brought to the party to rig the dogfight.

Scenic designer Sean McClelland harnesses the challenging wide-and-shallow Abdo stage nicely and Rick Pena’s costumes are on-target in evoking period and personality… Fitzpatrick’s military choreography is muscular and macho and his cast is appealing, even if the show leaves a sour taste in the mouth.

It is possible for a theatrical production to be so masterfully done as to camouflage the flaws in the script. That is the case with Slow Burn Theatre's staging of the musical "Dogfight" at the Broward Center for the Performing Arts…

…wild-eyed pals from basic training have a bet: Each throws in $50 and spreads out through 1963 San Francisco looking for the homeliest date he can find. The winner escorting the ugliest "dog" wins the whole pot. The women lose, in every way possible… It's worrisome that the sting we should feel at the actual contest is muted and even muffled as written here.

The songs by the team of Benj Pasek and Justin Paul are serviceable, but set aglow by a first-class cast. No one overplays it nor over-sings it, though it is perfectly clear that each and every one of them have the skills to pin us to the back of our chairs if they wanted to. Instead the power here is focused and calibrated by the maestro-level work of Patrick Fitzwater, the shows director and choreographer.

It's in the little moments: Eddie's cool and cold assessment of Rose when he first sees her strumming a guitar in a late-night diner; the warning glare in the eyes of Rose's mother (Sabrina Lynn Gore); the ever-so-slight wince of pain from tilted-askew prostitute Marcy (Alexa Baray) hired as a ringer for the contest. The cumulative effect is haunting, made all the more so by the rich singing voices packed with personality… the musical is surprisingly delicate, one false moment could cause the whole show to cave in on itself, especially when in the second act the story changes trajectory toward an achingly tender romance.  But even through that, Fitzwater keeps a determined hand in control

The music direction (Emmanuel Schvartzman), lighting design (Becky Montero) and costuming (Rick Pena) lift this material, with it shortcomings, into an evocative entertainment throughout the two hours with a 15-minute intermission.

The Slow Burn Theatre Company  production of the musical Dogfight plays at the Broward Center for the Performing Arts through November29, 2015.