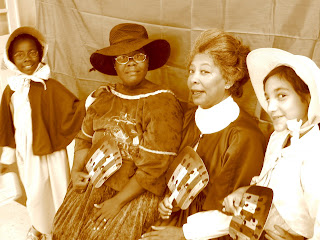 The sheer size and scope of Sisters! make it a
challenging undertaking for any company. AAPACT casts by the show, mixing
professionals and students, and director Rachel Finley (who also appears in
Sisters!) does a decent job of blending performers of varying abilities.
...
An elegantly dressed Gail Willingham anchors
the play as Sarah Louise Forten, the narrator who does verbal scene-setting and
offers running commentary.
...
The production also blends movement and music
-- a capella renditions of such songs as Sometimes I Feel Like a Motherless
Child, Balm in Gilead, Let My People Go, Down by the Riverside, Steal Away -- to
underscore the meaning and mood of the women's stories.
The diffuse Sisters! frequently reveals its
roots as a history lesson designed to remind or educate those watching. But the
piece undeniably moves and connects with AAPACT's audience.

Kimberly Grant of the South Florida Times wrote somthing that apparetnly started out as a promo piece but got labeled as a review:

My very first interaction with the cast and crew of Sisters! A Celebration of the Human Spirit, was at one of their rehearsals.

Yep, I think that's what happened. In fact, Grant is hopelessly tangled between describing the rehearsal process and reviewing the play:

Her direction, however, is so seamless that had I not been looking at her from time to time, I wouldn’t have even known she was directing.

During the rehearsal, her intense gaze was on all the action, looking for perfection that is almost already there.

OK, I'm not going any further with this one; the writer is obviously too close to the cast to give us a review. But it is an article about the play. Ms. Grant does provide a link to the show's blog. I was surprised and impressed to see design studies on the blog; such fine attention to production design details isn't something I've come to associate with AAPACT productions.
Posted by C.L.J.