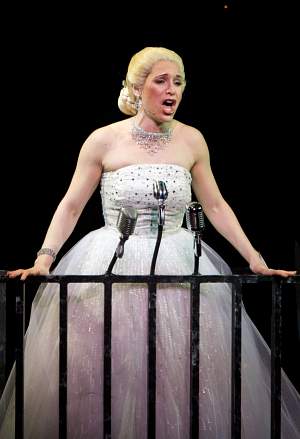 ...from the first glimpse of Robert Kovach’s scenic design — a post-modern abstract landscape of twisted latticework, kind of a cross between the Beijing bird’s-nest stadium and I.M. Pei’s Louvre pyramids — on the Maltz Jupiter Theatre stage, it seemed to promise a new take on the show, not unlike the company’s recent directorial preconceiving of Barnum.

Instead, guest director Marc Robin is content to settle for a traditional staging, with no discernible new ideas of his own. That said, Evita is a complex show that is hard to pull off well, and the Maltz production is very proficient, in no small part because of the performance of Jodie Langel as that tramp of the Pampas, Eva.

While Evita is wonderful to look at - Robert Kovach's set design is impressive and Donald Thomas' clever use of lighting beautifully heightens the tension - a full musical format never allows theatergoers to peek inside the soul of Peron (Jodie Langel). It's all style and not enough meaty character substance.

To many, Evita will forever remain Patti LuPone, who played Peron to Tony Award-winning perfection on Broadway. But Langel puts her own stamp on the iconic figure. Not only does she have a beautiful singing voice, Langel also commands the stage in a way all leading actresses should.

Personally, I'm not fond of reviews the refer to other productions; it's rarely relevant. Most South Florida theatre patrons have never seen LuPone perform this role; and she hasn't played it for a very long time. I've seen Connie Saloutus play it twice - once at Jupiter Theatre, in fact. She's played Eva Peron at least four times in Florida, why doesn't Thompson mention that? Because it's not relevant, and neither is LuPone. Stick to the play you're watching, Kevin. Nothing else matters.

Evita represents the largest musical ever staged at the Maltz and features a 20-person cast, an 11-member children's choir (all local kids) and a 10-piece orchestra. The stage could've felt crowded but doesn't under Marc Robin's direction. Ironically, the larger-than-life production plays better small. The more intimate setting will make audiences feel as if they're in Argentina themselves along with Evita during one of her rousing speeches.

Kevin should have seen it at Jan McArt's Royal Palm Dinner Theatre. The stage was only 17' x 14', and surrounded by the audience (Royal Palm was theater-in-the-round).

Evita plays at the Maltz Jupiter Theatre through April 5, 2009.