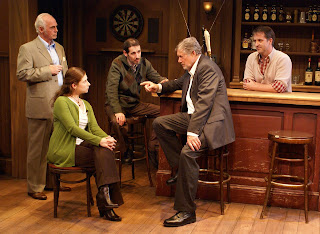 Palm Beach DramaWorks opened The Weir on February 20th, and runs it through April 5th.

Director J. Barry Lewis weaves all of this with an invisible hand, setting a tone of naturalism that offsets the poetic language.
...

Dramaworks has scored a coup with the casting of stage and screen star Converse, who anchors the production as wry Jack...
...

The Weir — the word refers to a nearby dam — is helped by the intimacy of Palm Beach Dramaworks’ playing space, which places the audience inside the pub with the locals. The only thing that might improve the production is if we too had pints of Guinness to help sustain us as we take in these tales of the supernatural.

McPherson's story reels you in like a classic Stephen King novel, but ultimately disappoints with an unsatisfying ending that offers no emotional payoff. Don't be surprised if you leave the theater feeling frustrated. And that's too bad because, although somewhat flawed and inconsistent in tone, The Weir is a well-acted play under J. Barry Lewis' direction. But it's betrayed by a flat and abrupt ending.
...

The Weir is clearly an ensemble production and the actors work together like a well-oiled machine. The four men have a free-flowing chemistry and you instantly believe their friendship. As the blustery Finbar, Creaghan is a standout. Television vet Converse and his rumbling baritone also will command your attention. Michael Amico's meticulous set design makes you feel like you're in Ireland and the eerie sound effects (also deftly handled by Amico) set the appropriate tone.

Jan Sjostrom reviewed it for the Palm Beach Daily News:

The play is being given a heartwarming production at Palm Beach Dramaworks in West Palm Beach under J. Barry Lewis's sure-footed direction.
...

Dennis Creaghan is particularly at home in the skin of the urbane Finbar. Karl Hanover's Jim almost curls up with shyness, but wins the prize as the man best able to communicate warmth when needed. Lena Kaminsky's Valerie adds layers as the play progresses until at the climax her perfectly pitched anguish surprises and devastates.
...

The Weir won Britain's Olivier Award for best new play in 1999, and McPherson, who also wrote the Broadway hit The Seafarer, is regarded as one of Ireland's leading playwrights. Dramaworks' production shows us why he's been so honored.

Brandon K.Thorp reviewed it for the Broward/Palm Beach New Times (scroll down - it's a double-bill with his review of Dead Man's Cell Phone):

Like McPherson's previous effort with Shining City, The Weir leaves audiences rattled, moved, but vaguely unsatisfied. We wonder: What was that about? It is a question with no real answer. The Weir is like a slice-of-life vignette. Its life or death lies in how exquisitely a company can wring authenticity and feeling out of small, almost silent moments of human transaction. And Dramaworks' constant director, J. Barry Lewis, wrings well.All of his actors, with one unfortunate exception, take to the stage as though they're excerpting a single evening from lives lived far beyond the theater door.
...

McPherson's naturalistic dialogue is what grounds his ghostly narratives in the imaginations of his audience. Which is why (Frank) Converse's Jack is such a problem. Though a longtime vet of stage and screen, Converse fails to negotiate the choppy rhythms of McPherson's patter.
...

Each time Converse bungles The Weir's rhythm, the play suffers a minor derailment, which must rankle anyone intimately involved in the production. Audiences, however, may find it a relief. In a tavern so dark, on a night so haunted, it is comforting to have even this clumsy reminder that The Weir is only a play.

The Palm Beach DramaWorks production of The Weir runs through April 5th, 2009.