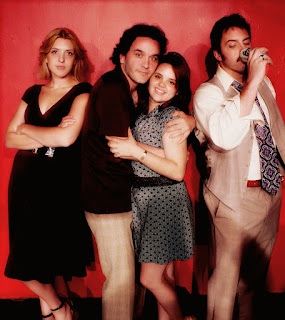 The Alliance Theatre Lab opened its production of Sexual Perversity in Chicago on November 5, 2009.

One of Mamet's early works, Sexual Perversity in Chicago revolves around Danny and Deb, two twenty-somethings who begin a tentative fumbling towards love amongst the sexual excesses of the 1970s. But this awkward beginning of romance is given a harsh introduction to the reality of interpersonal drama by Bernie, Danny's brash and cynical best friend, and Joan, Deb's fierce and cold roommate. Mamet's play examines the workings of love and romance in a society where monogamy and commitment have become the perversity.

Acevedo’s sweeping generalization speaks more to his love of Mamet’s first successful play than anyone else’s. That would be the only explanation for choosing this dated play for Alliance’s last production of the year.

As you can tell, Mary isn't enthused about the play.

David Sirois has displayed talent in other shows, but in Sexual Perversity in Chicago it’s as if he’s given up by the first scene. Even so, his lackluster performance as Dan is better than Reiff’s one-note bombast as Dan’s best bud Bernie, an obnoxious misogynist. Leal and Serralles don’t fare much better in what amounts to supporting roles.

It is true that big things often come in small packages. Such is the case with the Alliance Theatre Lab’s current production of David Mamet’s Sexual Perversity in Chicago...

Reiff masterfully commands the stage from the start. His clever use of tone and body language allows us to discover a Bernie that is wrought with insecurity issues...

Sirois likewise utilizes a suave naturalness to his tone that convincingly produces a likeable Danny...

Leal exudes a perfectly coquettish behavior for her Deborah, whose claim that she has lesbian tendencies may in fact be more a political stance rather than a sexual preference.

Serralles contains the unique ability to present the likeable bitch...

I think director Adalberto Acevedo was having too much fun to worry about... somber things, and this version of SPC provides no time or space for them. This production is about antics and four actors' transcendent ability to get wild and dirty and crazy onstage.

The deep pleasures of this SPC — and there are many — come from individual moments of dramatic ingenuity that have nothing to do with Mamet's vision or anything else. Consider Jehane Serralles' amazing acid tongue, so potent it might burn holes through her lovely cheeks before the run is over.

Another pleasure: Travis Reiff's fantastic over-the-top misogyny and sexual angst. They make him difficult to share a room with but delirious fun to watch.

But the greatest pleasure, and the best bit of acting, in Acevedo's SPC comes during Danny and Deborah's courtship, in a scene on a bed in Danny's apartment, as they talk to each other in cutesy little-kid voices and Deborah squirms around on Danny's lap. I couldn't tell what they were saying — the audience was laughing too hard at whatever it was — but watching their faces was enough. I don't know if I've ever seen two actors better capture the euphoria of fresh infatuation as it really is.

...a time-tripping performance of Sexual Perversity. The preshow music is vintage Marvin Gaye, setting a sensual mood as only he could do. The costumes, such as one guy's three-piece suit and wide tie, also say '70s. The rest -- the attitudes, sexual come-ons, fast physical intimacy among strangers -- is classic Mamet.

Director Adalberto J. Acevedo keeps the play hurtling forward as he turns actors who weren't born when the play was written into spot-on interpreters of Mamet's crude, fast-paced battle of the sexes. Reiff runs wild with Bernie's outsized vulgarity, Serralles gets Joan's frostiness, and Leal finds Deborah's empathetic vulnerability. Sirois does wonderfully layered work as Danny, sliding from decency to nastiness so convincingly that you feel as let down as Deborah does by a good guy gone bad.

Though Alliance still needs to raise its game when it comes to design work, its production of Sexual Perversity in Chicago gives four talented young actors the chance to take a walk on the wild side through Mamet's outrageous, R-rated world.

...it is always revealing to watch a small, local theatre company produce a well-known play without benefit of big-money-sets and extravagant lighting and sound.... Despite such budget shortfalls in the technical department, lighting expertise by Skye Whitcomb and recorded music – along with four magnetic actors – allow The Alliance Theatre Lab to take over the Main Street Playhouse’s tiny venue in Miami Lakes with topnotch quality in a David Mamet revival of the 1970s hit Sexual Perversity in Chicago.

This play hits its mark thanks to some astute direction by Albert Acevedo but also by a cast of twenty-something actors...

If ever actors deserve applause, it is this foursome “making mad” in Miami Lakes.

Sirois and Reiff in particular, shine for two different reasons: Sirois for underplaying his low-key character and Reiff for his volatile performance of the womanizing best-friend.

Sexual Perversity in Chicago plays at The Alliance Theatre Lab through November 22, 2009.
Posted by C.L.J.