Mosaic Theatre: Why Torture is Wrong and the People who Love Them (4 reviews) 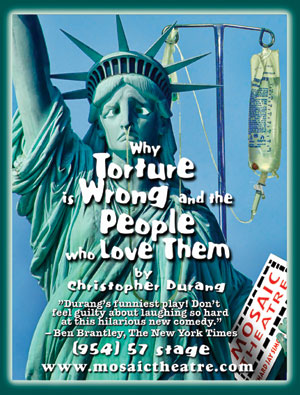 Mosaic Theatre opened its production of Christopher Durang's Why Torture Is Wrong, And The People Who Love Them on November19, 2009.

Christopher Durang turns political humor upside down with this raucous and provocative satire about America's growing homeland "insecurity." It's the story of a young woman suddenly in crisis: Is her new husband, whom she married when drunk, a terrorist? Or just crazy? Or both? Is her father's hobby of butterfly collecting really a cover for his involvement in a shadow government? Why does her mother enjoy going to the theater so much? Does she seek mental escape, or is she insane?

Plantation’s Mosaic Theatre has excellent taste in playwrights, but it is much more erratic when it comes to selecting plays from their catalogues. The result is second-rate work from such first-rate writers as John Patrick Shanley (Dirty Story), Neil LaBute (Wrecks) and now Christopher Durang (Why Torture Is Wrong, and the People Who Love Them).

Resident scenic designer Sean McClelland has come up with an attractive series of sets that satisfy Durang’s multiple-location requirements, and director Richard Jay Simon knits the wackiness into as cohesive a whole as possible.

But it does make one wonder what Mosaic Theatre could come up with if it selected a play worthy of the care and attention it has lavished on Why Torture Is Wrong.

Durang’s script is smart—chock full of sexual innuendo, theater jokes only an insider can truly appreciate, and plenty of political commentary—but, most importantly, it’s funny, eliciting sidesplitting laughter at every ridiculous turn. A well-rounded, even cast is required to pull off Durang’s humor and director Simon’s team delivers on all counts as each character, in turn, contributes to the zany antics.

Kremen and Duckart deliver strong performances, forced to serve as the “straight guys” for the jokes unfolding around them. It’s Corey and Bradshaw who steal the show with Durang’s outrageous caricatures of the 1950s sitcom father and mother.

Kudos also go to Rockwell, Roza and Fabregat for their colorful, cartoonish portrayals in the vital supporting roles.

Brandon K. Thorp reviewed for the Broward/Palm Beach New Times; it's not one of his better efforts. It's written like a film review instead of a theatre review. That is, he does not separate what works because of the scrip versus what works because of this production's interpretation of that script. In a film, where everyone will always be referring to the same production, that's acceptable. But in theatre, every production will have a different result, and part of the critic's job is to identify which is the script (or the playwright), and which is due to the interpretation (the director, design team, and cast). That said, it's a good read. But we're left wondering was it the writing he liked, or the performance of that writing?

Durang... writes dark comedies, but we laugh at them more because we are nervous than because they are funny. (Though they're funny too.) We are nervous because so many of Durang's characters... say things that people shouldn't say and are blithely unaware that their words have consequences.

Somebody behind me in the auditorium groaned, and I sympathized entirely: Only the first scene, and we're already into woman-beating mode. Why Torture could be a very grim slog.

It isn't, because we soon adapt to Durang's bizarro world. We learn its alien rhythms and emotional physics, which keep its characters leaping from sweetness to violence and back again as lithely as grasshoppers on the moon. We adjust because Durang's world is the one bubbling just beneath the surface of our own. All id, no superego; all honesty, no hedging.

Bradshaw's Luella is even weirder, if possible, and I suspect she's the sole force keeping this nervous comedy coherent. She's simultaneously funnier and scarier than any other character in the show... Bradshaw expresses her vacancy and diminution in a tour-de-force performance that's equal parts Bette Davis in Whatever Happened to Baby Jane, Terry Schiavo, and pure originality.

The absurdist script is funny and smart, yet hardly buoyant. It's sometimes weighed down by its specifics... Such references, as horrifying or hilarious as they are when the play debuts, cause it to date faster.

The cast is uniformly fine, but Bradshaw's dazed Luella (who knits even when unconscious) and Corey's deranged Leonard are a comically perfect pair. And Fabregat, whose shadow government code name is ``Looney Tunes,'' makes like Sybil as he channels the Road Runner, Elmer Fudd, Foghorn Leghorn and more, even cartoonishly defying the laws of gravity at just the right moment.

Why Torture Is Wrong, and the People Who Love Them provides both laughs and astute social/political observation. But it is also, at times, as unwieldy as its title.

The satirical, often-hilarious story, a topnotch cast, astute direction, and an outstanding set all add up to a rather pleasant couple of hours.

Yes, it is funny. Yeah, it has a great cast and cleverly appointed direction. Obviously, the playwright is over-the-top (who else could imagine such a group of screwy characters?) Did we mention, outstanding lighting by Jeff Quinn, great sound technician ability by Matt Corey, and a surprising set by Sean McClelland?

If there is a single word to describe “Torture,” it might be ‘absurd.” Bradshaw could have this play in mind when the script calls for her to say, ”I don’t know what normal is; that’s why I go to the theatre.”

Why Torture Is Wrong, And The People Who Love Them plays at Mosaic Theatre through December 13, 2009.
Posted by C.L.J.