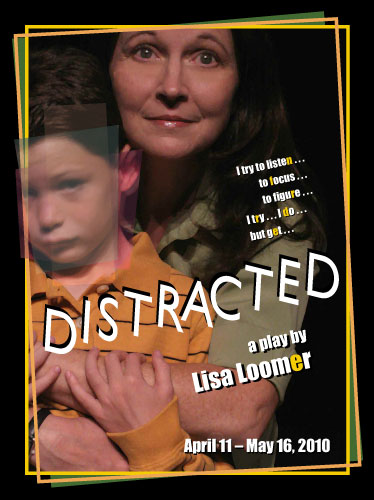 The Sun-Sentinel has declined to review this production.*
John LaRiviere gets his review out just in time for the final performance for Talkin' Broadway.com:

Turnbull convincingly embraces the role in both the happiest and most frustrating of moments. She is well paired with Stephen G. Anthony as Dad. Though the script deprives them of any romantic moments, they fit together with the comfortability of a couple who have known each other a long time.

Michael McKeever is truly funny in his "Dr." roles (Dr. Broder/Dr. Jinks/Dr. Karnes), but is most ideally matched with more clever writing by Loomer as the Actor with ADD who breaks character mid-scene to discuss his own history of ADD with the audience and fellow cast members. Kim Cozort is great as Dr. Waller on the verge of a divorce, but flounders with a fluctuating accent as neighbor Sherry, and never commits fully to her role as the teacher Mrs. Holly. Lela Elam is wonderful as the Nurse, but comes off as fake in her concern as Dr. Zavala. Newcomer Nikki Bromberg is perfect as Natalie.


...if you blink you might not notice how masterfully director Clive Cholerton has framed Loomer's odd structural decisions.

There's a lot to distract you in Distracted, but what my mind keeps returning to is Tim Bennett's sparse set.


Director Clive Cholerton has cast some of South Florida’s best actors to play these characters.

Lots of serious issues are raised between the yucks: holistic therapy vs. prescription drugs, psychological counseling, the role of information overload and media bombardment and the sheer frenzy of modern life.

Loomer's play, about a couple trying to figure out how best to help their hyperactive 9-year-old son, has just opened in a masterfully acted production at Boca Raton's Caldwell Theatre Company. It is a keenly observed meditation on modern parenting and childhood, on conflicting and confusing treatment advice, on the damaging effects of getting hooked on 24/7 stimuli. And thanks to the company director Clive Cholerton has assembled, it also serves as a reminder of just how much acting talent chooses to call South Florida home.

As a plucky, determined, multitasking woman, Turnbull makes us root for her as she encounters one roadblock after another...

In Distracted, Loomer cleverly flips the dictum that children should be seen and not heard. Until the play's final moments, Inerfeld remains offstage, speaking (or shouting) Jesse's lines into a microphone cranked up to ear-splitting volume. And what lines! Jesse rants, demands, curses, defies. Hearing but not seeing such a difficult kid makes it easier to imagine him as a problem to be dealt with rather than a complicated young human being. He is, of course, the latter.

(playwright) Lisa Loomer... manages to slip in the mini-lectures about ADD and ADHD, and the pros and cons of the drugs, without slowing the pace or lightening the humor. And there is plenty to laugh at.

Gone far too long from South Florida, Kim Cozort opens her first scene with Dr. Waller snarling into the phone: “Take the damn Lexus but you will not get my dog.” Then she's Jesse's school teacher Mrs. Holly and neighbor Sherry and I'm laughing once again.
Kim Ostrenko hits triples as Mama's know-it-all neighbor Vera, a ditzy waitress and a UPS driver. Nikki Bromberg graduated from FAU just last year and is scary good as Natalie, the babysitter who's into cutting. Of course, if you want a dissertation on the fine art of using the F-word, don't miss Lela Elam, who doesn't flinch at full pronunciation.

And Michael McKeever in a studly wig is a sight you won't soon forget. He plays three doctors and an actor with ADD. Type casting?

There's no doubt Distracted smacks of sit-com and lecture halls and has an easy, predictable ending, but this production, directed by Clive Cholerton and well led by Laura Turnbull and Stephen G. Anthony, is generally great fun.

Distracted plays at the Caldwell Theatre Company through May 16, 2010.
Posted by C.L.J.