One Company, Three Names, and 19 Years

The theatre at 262 South Ocean Boulevard has had three different names across its marquee in the last 19 years.  Theatre Club of the Palm Beaches.  The Lois Pope Theatre Company.  Florida Stage.  The staff has had changes, although Louis Tyrell has remained at the helm the entire time, with Nancy Barnett by his side.  Suzanne Clement Jones has been Production Stage Manager,  and Lauren Mathers has kept a firm hand on the Box Office.

I was stage manager for the first show mounted in the Manalapan space.  So many changes, and they started during rehearsals: the company was then called Theatre Club of the Palm Beaches, and the show was originally going to be Tête-à-Tête, by Ralph Burdman, directed by Jose Ferrer, starring himself and Kim Hunter.  Alas, Ferrer was struck ill the day before rehearsals were to start, and at the last minute the play was replaced with Mitch Giannunzio's A Smaller Place, which Hunter had done the previous summer.  Director Vincent Dowling came with it, and brought in an actor he knew, Bob Elliot.  Of course, beyond the changes in script, cast and director, the set had to be completely re-designed and built in a fraction of the usual time frame, all while the theater itself was being constructed.

But the show must go on, and it did.  Here's a photo from opening night at the new theatre, October 1991: 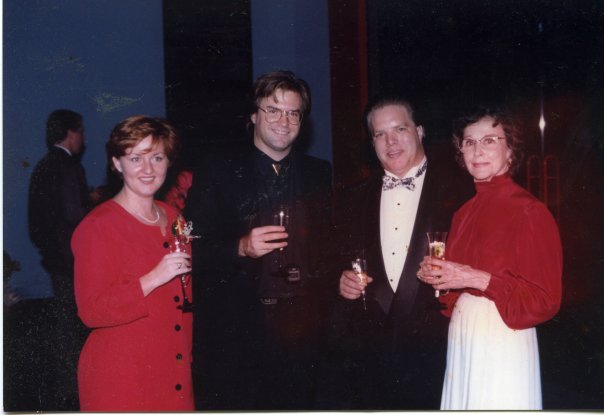 Pictured: Jodie Dixon, Christopher Jahn, Tim Wilkins, and Kim Hunter
opening night of A Smaller Place, October 1991
The new theater had twice as many seats as the community college lecture hall we left behind, but while sales were brisk, we discovered a problem no one had considered during construction: the elderly patrons that made up the majority of the subscribers had difficulties managing the stairs that comprised the two aisles!  An urgent meeting a few days after opening to work out how to add railings to the space - which are still in place today, fabricated by Russ Baron and the scene shop on very short notice.  Disaster averted, Louis' next problem: despite doubling the capacity, the subscriber base reached 89% occupancy before the New Year.  The following year, it hit 98%.

We also quickly hit the technical ceiling, literally; the low roof didn't leave a lot of room for rigging.  We did do one show where we created a followspot up in the rafters; the operator, chosen as much for size as skill, climbed up a ladder onto what was basically a shelf, and stayed up there the entire performance.  Later, we dealt with requests to fly small peices of scenery, and dealt with low-hanging lighting units on occasion.

So it was no surprise to me  when Louis and Nan announced they were moving; they really needed to do it back in 1992.  And I may be the only one in South Florida who is not "concerned" about the move.   This company did miracles in a SUPERMARKET, fer crying out loud: imaging what they will accomplish in a space actually intended for performing!

Friday night, they opened their last play in the converted supermarket on South Ocean Boulevard, the world premiere of When The Sun Shone Brighter, by Christopher Demos Brown.  It  is a much stronger production than A Smaller Place; a cleaner script and crisp direction.  And while Kim Hunter was excellent, the larger cast of this production is more than a match for the late Tony and Oscar winning actress.  Kim would have been delighted with the level of talent and skill demonstrated on the stage she broke in.

19 years:  it doesn't feel that long ago. But of course, it was almost another age; cell phones were still the exception, no one had heard of the World Wide Web, and the word "text" hadn't grown that "ing" off the back.  And of course, some of us were skinnier and less gray. 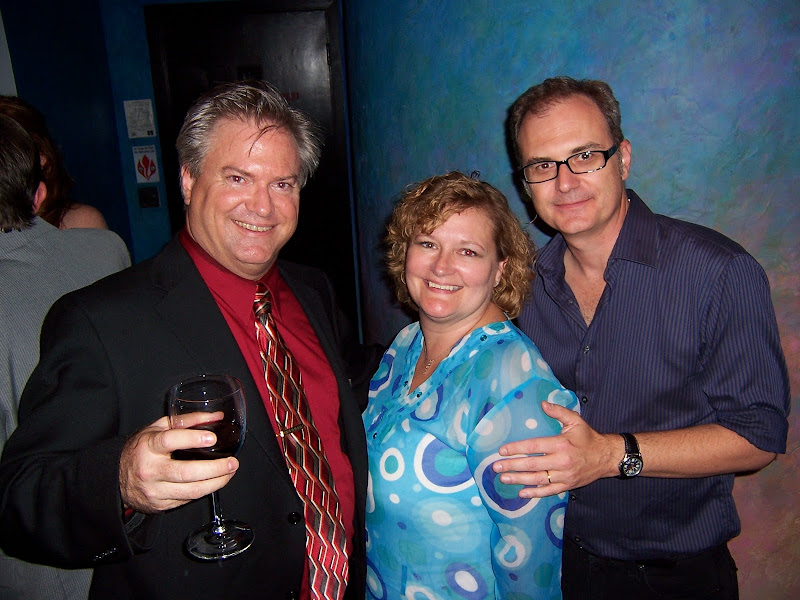 pictured: Christopher Jahn, Nancy Barnett, and Rob Goodrich
opening night of When The Sun Shone Brighter, May 2010
There are tales we will carry with us from the last 19 years; the tale of the gray rock that isn't  remotely blue, the time a certain ASM stained a certain Company Manager, the time the chicken upstaged everyone by laying an egg, the cautionary tale of a certain stage manager  who decided to polish the mirrored plexiglass stage floor opening day and discovered that what made it shiny also made it very slippery, and the night a tornado hit the building during the final scene of a play - and the show kept going.  We found love, lost tempers, and poured blood, sweat and tears into that space - just a few ingredients in a recipe for excellence.

I doubt that the space will host another theatre company; it took the miracle of a grand sponsor for a journeyman company to find a home there; it's unlikely that another group could taken on the premium rates of a lease in the toney shopping center across A1A from the Ritz Carlton.

But on second thought, it wouldn't be the first miracle to happen there...
Posted by C.L.J.