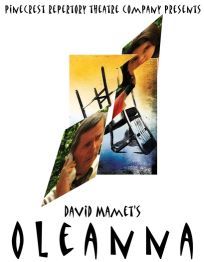 Pinecrest Rep opened its production of David Mamet's Oleanna on May 15, 2010 at the Pinecrest Gardens Banyan Bowl (former home of Parrot Jungle).


David Mamet's Oleanna, when treated with even half of the passion and smarts evident in Max Pearl's blistering Pinecrest Rep production, is an exhilarating play.

Greg Schroeder is a soulful actor, and his Dr. John seems to mean what he says, even if he cannot do anything about it. In the next scene he will take three minutes to deliver two sentences... This is not how you talk to an unlearned child accusing you of impenetrability. But John doesn't know that.

Bertha Leal is a young actress, and in some ways she is very green... Her attempt at a predatory smile (stick tongue against top two teeth, grin big, widen eyes to affect mock-friendliness) is a put-on, and makes her look even younger than she is.

Green or not, though, Leal is a prodigious talent. The contrast between her plaintive declaration of ignorance in the first scene — "What's a 'term of art'?" — and her haughty declaration of same in the second — "I don't know what a paradigm is" — is masterful.

The Pinecrest Rep prodcution of Oleanna plays at the Banyan Bowl through June 6, 2010.
Posted by C.L.J.