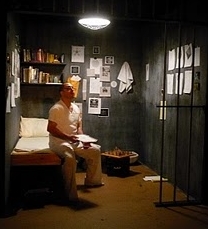 The Alliance Theatre Lab opened its production of Bruce Graham's Coyote on a Fence on June 10, 2010.

Illiterate but likable, Bobby Reyburn is a funny young guy who loves to do impressions. He's also a member of the Aryan nation, a racist predator convicted of a horrific crime. John Brennan is educated and arrogant, a serious writer who may only be guilty of doing society a favor. As each awaits his fate, one evokes sympathy, the other derision. In vivid scenes, COYOTE ON A FENCE explores the disturbing question: Can one be innocent though proven guilty?


Della Ventura (is) fascinating as Bobby, a member of the Aryan Brotherhood who hates Jews and Blacks, was gang raped so badly he walks with a limp, sees out of only one eye, is uneducated and ignorant, and was birthed by a prostitute.

Travis Reiff is a grounded actor whose stage weight is always there. No missteps here as John Brennan.

There's no doubt this is a political play but this is forgiven and forgotten with the force of Adalberto Acevedo's direction and the performances of his cast.  Mike Stopnik designed the realistic set (check out the ingenious exercise yard). The equally good sounds and lights are by Howard Ferre and Will Cabrera.

The Alliance Theatre Lab production, one of the troupe's most powerful and polished shows to date, sends its audiences back out onto Miami Lakes' Main Street pondering forever-incendiary issues: justice, vengeance, the legal system, racism and the "why'' of horrific crimes.

Graham's play focuses on a pair of Texas death row inmates.  John Brennan (an intense, engaging Travis Reiff) is an educated man who once worked at the prison as a drug and alcohol counselor...John's new next-cell neighbor is Bobby Reyburn (Mark Della Ventura), a slow-witted, cheerful man...

...Coyote on a Fence doesn't settle for easy. Both Graham's writing and Della Ventura's masterful performance keep the play from becoming a clear-cut study of guilt and innocence.

Both women play their parts well, but casting Serralles in a role written for a male brings a slightly creepy dimension to her initial scene with John, who asks about her marital status then wants to see a picture of her 5-year-old daughter

Working on Mike Stopnick's set, with its lived-in cell for John and barren one for Bobby, the cast and director Adalberto Acevedo take the audience on an intense, difficult, thought-provoking journey.