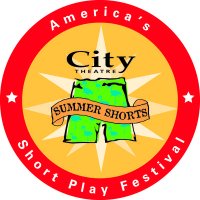 City Theatre opened Summer Shorts at the Adrienne Arsht Center for the Performing Arts Center on June 3rd, 2010.  The company has been producing its short play festival for fifteen years, and besides changes in venue, the festival has been broken down into 3 distinct sections: Signature Shorts, which is the same mix the company has pursued from the start, Under Shorts, aimed at more mature audiences, and a children's play section.  This year, instead of Shorts for Kids, they are offering a new musical called Camp Kappawanna, with music by Lisa Loeb.  That show will be reviewed separately.


It’s short attention span theatre, so if you don’t like a play, there will be another one along in a few minutes.  This year especially, that’s a very good thing.

While the acting talent in this edition of Summer Shorts remains stellar—Elena Maria Garcia, Scott Genn, David Hemphill, Chaz Mena, Erin Joy Schmidt, Laura Turnbull, Stephen Trovillion, Breeza Zeller—the writing is not always up to par.  Word is that these 15 plays were chosen from more than a thousand submissions, so does the problem lie with the level of writing or the folks that chose the plays?

The main thing that’s off in this year’s festival is that there is less of an ensemble feel to Summer Shorts.  With two monologue plays in Signature Shorts, the actors seem underused.  There is also less of that frenetic energy that has been such an important element of Summer Shorts’ success.

While each of the eight actors have their moment in the spotlight, there are some stand-out performances.  Summer Shorts newbie Scott Genn gets to sink his teeth into some varied roles, and shows he’s adept at both comedy and drama.  Summer Shorts vet Elena Maria Garcia, who won a Carbonell Award for her performances in last year’s fest, once again proves she’s one of the best comediennes around.  And David Hemphill morphs seamlessly into terrified child, a diplomatic catcher, a klutzy gyno and a death-defying dude.

Fifteen plays are presented, eight in Signature Shorts and seven in Undershorts.  Both programs have their head-scratcher, what-were-they-thinking moments, but overall Undershorts is the better program, so if you can only see one program in the festival, go with Undershorts.

Brandon K. Thorp reviewed for the Miami New Times, and as always, has his own take on things:


Just about every pro critic in SoFla has, at one time or another, privately expressed doubt that each summer's Shorts are really culled from 1,000-plus entrants, but this is the first time the idea seemed really ludicrous. If this motley assemblage represents the best of American short drama, the idiom is in very, very deep shit.

Take, for example, Michael Elyanow's truly terrible "Banging Ann Coulter," which is somehow more odious than its subject...I suspect Elyanow hasn't read Coulter's columns, never mind her books. In fact, he seems to know too little about Ann Coulter to finish the play he has written about her. Shortly after Turnbull's arrival onstage, "Banging Ann Coulter" devolves into a useless tangent about — get this — the playwright's fear of not being taken seriously as an artist.

Only one play in that grim slog knows when to quit. That's Bridget Carpenter's "Euxious," a heartbreaking vignette featuring Laura Turnbull (unhorned and clad in a smart business suit) in the aftermath of a car accident that very likely killed a minivan full of people.

But all credit must go to the actors — including the chameleon-like David Hemphill and Scott Genn, who leave the stage soaked in blood, sweat, and probably several other bodily fluids. City Theatre's actors know how to rock a short play. Doesn't anyone know how to pick one?


Both the eight short plays in Signature Shorts and the seven in the R-rated undershorts offer the mixed-bag experience of festivals past: Some shows will make you flip, while others flop. True, the ``agony'' of a weird/flawed play doesn't last long, and there's usually something moving or hilarious just minutes away.

Among the pleasures of Summer Shorts is watching a top-notch acting ensemble. Chameleonic actors do best in this quick-change format, and this year's standouts are Stephen ``Mr. Summer Shorts'' Trovillion, David Hemphill and Chaz Mena among the men; Laura Turnbull and Elena Maria Garcia among the women. Erin Joy Schmidt, Scott Genn and Breeza Zeller also have some touching or funny moments, but their fellow actors make more of better roles.

The multicharacter hits in Signature Shorts are the opening play, Jay Rehak's The End of a Perfect Game... the reprise of Rich Orloff's Matterhorn, ... and the closing black-comic piece Not a Creature Was Stirring by Christopher Durang

Two intense solo pieces are also memorable. Trovillion plays a teacher who relates the story of a childhood tragedy in Dan Dietz's Lobster Boy; initially in pure lecture mode, he pushes into emotion at just the right moment, carrying the audience along with him. In Bridget Carpenter's Euxious, the compelling Turnbull portrays a mom and way-stressed executive being questioned after an accident involving a mysterious phone call that takes the play to an other-worldly place.

The bawdy, adults-only undershorts starts off with a bang -- specifically, Michael Elyanow's Banging Ann Coulter in which a monstrous version (Turnbull) of the hate-spewing conservative babe is portrayed as a gal who gets it on with one and all. Other pieces have their moments, thanks to the actors...

...the second-to-last piece in undershorts is so worth waiting for: In James' The Pap, Garcia and Hemphill play experienced patient and brand-new gynecologist, and though they keep their acting real, the two offer a master class in how to milk every imaginable laugh from observing a woman in stirrups with nary a horse in sight.


...It's a damn hard art form, writing an arc in ten to fifteen minutes and it's an even harder task finding fifteen successful plays to fill an evening. City Theatre has been trying for fifteen years, sometimes getting the gold, other times the iron pyrite.

Technically the two shows work well. Good lights and sound by Sevim Abazza and Steve Shapiro with an ingenious set by Sean McClelland. Don't miss the set up for the opening pitch in The End Of A Perfect Game or the graphics during Banging Ann Coulter (my favorite title of the evening) and the excellent and imaginative costumes by Estella Vrancovich.

Six veteran actors and two rookies (Scott Genn and Breeza Zeller) work well here during a very long evening. Fifteen plays, some I liked, others I didn't, but in almost every one there was a beat that shone.

City Theatre will present Summer Shorts at the Adrienne Arsht Center for the Performing Arts through June 27, before moving it to Nova Southeast University's Silverman Auditorium for its final weekend July 1 - 3rd, 2010.
Posted by C.L.J.