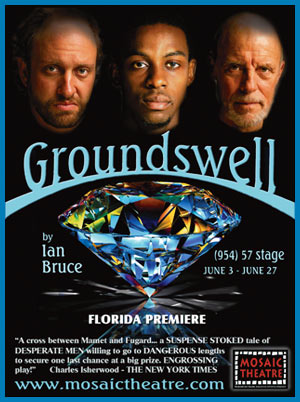 On the barren, diamond-diving coast of South Africa, Johan and Thami, an ex-cop and a gardener from starkly contrasting backgrounds, maintain a beachfront guest lodge during the off-season while looking for a way out. When Smith, a retired businessman, shows up one foggy night, the two men think they've found an ideal investor for their scheme to buy into a government-run diamond concession. Soon, these ruthless men find themselves in a power struggle fueled by greed, desperation and entitlement. GROUNDSWELL is a psychological thriller about hunger and hope, and the glittering promises of a transforming society.


Richard Jay Simon's Mosaic Theatre is playing with the big boys. What was once a black box with barren sets and scant audience has now, over the years, become professional with every good meaning of the word. The production values and the direction and acting demonstrated in Mosaic's current show, Groundswell, are the equal of any regional theatre in this area.

Simon runs Mosaic as a business, evident in the packed houses watching his shows. Evident, too, in the people he hires and the shows he selects...

Throw this gang together and you get ninety minutes of really good theatre.

Richard Jay Simon directed the old pros Haig and Weiner and Charles, an old pro in this, his first professional production. There's not a mis-step to be seen here. I had the pleasure of seeing Charles recently in his original one-man show: Ballad Of A Child Soldier. Impressive. A young actor with a large future.

...in the case of Groundswell you'll be singing the set and the lights and the sound regardless of the excellent performances on stage. Fog rolls, the warning bell tolls on its offshore buoy, bushes bend in the blustery winds and I swear I saw the shadow of his dog following Johan on his first exit.

Brandon K. Thorp reviewed for the Broward/Palm Beach New Times; well, almost reviewed.  Mostly, he recites the entire story for us. He does eventually give something like a review but it's fragmentary to the point of being useless.  First, it seems that he didn't care for the direction or acting:


...perhaps 25 minutes into the play, Groundswell simultaneously takes off and begins to disintegrate.

Yelling is a mode of dramatic expression that fast wears out its currency. Well before the end of the second scene — which is also the end of the play — volume fatigue sets in, and it's hard not to wish the involved parties would calm the hell down. Thami's play-ending revelation feels both too convenient and utterly false, and it does a disservice to Charles' sensitive, understated performance so far.

This is the first time he's mentioned anything about any of the performances.  Someone is apparently doing  a lot of yelling, but it may or may not be Marckenson Charles.  Was Charles' fledgling performance more, or less, "sensitive" and/or "understated" than those of his castmates, both of whom have won awards for their work?   Will the next paragraph shed light on the subject?


But Bruce's one false step shouldn't diminish his otherwise powerful second scene, nor the complicated treatment it is receiving at Mosaic Theatre. That scene weaves danger and sweetness, the political and the personal, friendship and hatred into a darkly fascinating medley that could terminate as easily with the spilling of blood as with the fulfillment of dreams.

"Complicated treatment?"  What was complicated about it, and how did it diminish the otherwise powerful scene?  Is Brandon saying that "yelling" is the "complicated treatment?"    We sure can't tell from this "review." Brandon wasted the entire thing narrating the plot, and tells us almost nothing about the production.
Christine Dolen reviewed for The Miami Herald:

Plantation's Mosaic Theatre has found an intense, compelling South African script to kick off its summer -- and no, the play isn't by the country's great Athol Fugard.

Director Richard Jay Simon and his artful design team -- particularly Douglas Grinn, whose handsome lodge set suggests both Africa and the seaside, and Matt Corey, who contributes the sounds of waves and a haunting bell -- vividly help bring the play's world to life.

But truly animating the relationships and tensions in Groundswell  falls to Mosaic's gifted trio of actors. Haig, who sounds more British than South African, expertly crosses the lines from self-confidence to defensiveness to bald fear. Weiner makes Johan a quick-thinking, volatile con man who would be at home in any Mamet play. And Charles, who only recently graduated from Miami's New World School of the Arts, gives such a powerful yet nuanced performance in his professional debut that he splendidly -- sometimes hauntingly -- holds his own against two powerhouse actors.