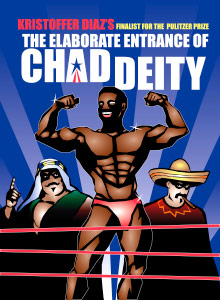 Caldwell Theatre Company started previes for its production of The Elaborate Entrance of Chad Deity on January 8, 2012, and opened on January 11, 2012.


Fresh from its Pulitzer Prize nomination, The Elaborate Entrance of Chad Deity is the comedic look into the world of professional wrestling but told through a thoughtful examination of race relations, geopolitics, and personal introspection. Unlike anything you’ve ever seen, one moment you’re awed by the spectacle, another you’re laughing uncontrollably and finally, you’re rethinking America’s place in the global landscape.


Well, I'm just plain sorry, boys and girls, but Chad didn't do it for me. It's... two hours of a show that you'd probably turn off after ten minutes of late night television. Sooner if they threw in the political innuendos of The Elaborate Entrance etc.

It's briefly fun to watch the actors fling themselves around the ring and their carefully choreographed athleticism is certainly to be admired. So is the direction of Clive Cholerton, who handles this spectacle like old Cecil B. The set by Tim Bennett, the lighting by Thomas M. Shorrock, the costumes by Alberto Arroyo and the projections by Sean Lawson rock the staid Caldwell like never before.


...Donte Bonner as Chad Deity has the smooth and cocky swagger of a wrestler at the peak of his popularity. He manages to capture the crowd's attention like a beautiful but spoiled child, which really is exactly what Deity is. Adam Bashian has great street cred as Paduar. His energy, accent, and body language all work together to make the character believable. Brandon Morris establishes the strongest relationship with the audience. He is ever present, monitoring and encouraging their response, without any of it effecting his pacing. His feel is personable and conversational, and while his character shares his observations of the situation, he manages to do it without steering them toward any conclusion but their own.

The Elaborate Entrance of Chad Deity is surprisingly entertaining. Our visit with the colorful world of wrestling provides a bit of a breath of fresh air. The meaningful message behind the premise sneaks into our conscious mind as it is presented in an unexpected way.


...the cheeky story is a wry, smart, and self-effacingly witty deconstruction of the wrestling world.

...the play is narrated by Macedonio Guerra, AKA Mace (Brandon Morris). Mace is a lower-tier wrestler in the fictional THE Wrestling federation. In industry jargon, he's a "jobber" — meaning a talented craftsman who helps promotes marquee wrestlers by artfully losing to them. It's a breathless, breakthrough turn for Morris, exposing how the pro-wrestling sausage is made with the perfect mixture of enthusiastic pride and stupefying self-awareness. He recites his lines with the spontaneity of someone who's just thinking this stuff up for the first time.

In a role that is flash over substance (Chad Deity), Bonner finds the substance in the flash.

Tim Bennett's set design is straight out of Monday Night Raw, with a wrestling ring stationed in front of a walkway leading from automatic, sliding metal doors enhanced with smoke and lights and bookended by giant projection screens — the stuff of countless elaborate entrances by countless musclebound wrestlers the world over.

That said, this is the kind of the show in which you come for the pro wrestling and stay for the social commentary. The Elaborate Entrance is a great play for the same reason Harold and Kumar Go to White Castle was such a surprisingly successful comedy: It's a politically incorrect satire that uses its juvenile premise to critique xenophobia and puncture American exceptionalism and egocentricity.

Phillip Valys wrote for The Sun-Sentinel:


Early on in Kristoffer Diaz's play about pro wrestling, middle-ranked Macedonio Guerra – ring name The Mace – growls villainously from beneath his Luchador mask.

Guerra is a perpetual middle-card wrestler and jobroni to the stars; that is, a professional fall guy who loses to top-tier wrasslers, ones who make up for lesser talent with unbridled charisma. For, as Guerra (a wonderfully eloquent Brandon Morris and the play's narrator) explains in his sort of anthropologically intelligent style, in the pseudo-sport of pro wrestling, sweaty men can't body-slam other sweaty men without the full "communion" of both.

...Chad Deity, a drama tackling an American pastime rarely captured for the stage and a play once shortlisted for the Pulitzer Prize in 2010, morphs the art of pro wrestling into a adrenaline-fueled satire of American excess.

Kudos to scene designer Tim Bennett, whose compact lone ring is spotlit with blinding Klieg lights and surrounded by grated mesh steel panels slapped to the wall like a actual WWE arena. As each wrestler smacks the canvas, every thump's a sharp reality check that these performers take lumps.


Hidden by the crisscrossing spotlights, the blaring fanfares, the handfuls of cash flying through the air, the billowing smoke (was there smoke? I’m not sure) and the sound of semi-buff bodies crashing to the mat of a wrestling ring, the Caldwell Theatre’s hilarious satire The Elaborate Entrance of Chad Deity sneaks a critical rabbit punch at the solar plexus of society.

Kristoffer Diaz’s play – a Pulitzer finalist in 2010 – is a risky choice for a theater whose audience prefers a title they have at least heard of, if never seen. But Artistic Director Clive Cholerton is betting heavily on word of mouth for this wacky but thought-provoking work in which performers tossing each other around is just the decorative icing on an incisive script featuring long philosophical monologues and rapid-fire repartee.

Cholerton has elicited joyful nose-thumbing performances from his cast.

Handsome Brandon Morris makes Mace a perpetually bemused observer who has absolved himself of any responsibility for advancing the racist storylines he disparages as self-evidently objectionable.... The actor breezes through pages of monologues as if they were ideas naturally occurring to him that he thinks will amuse us. He deftly bounces like a tennis ball in a video game between droll conversations with the audience and frustrated dialogue with the promoter.

Donte Bonner, who oozes raw sex appeal, is appropriately over the top as the brash, seriously ego-centric Chad Deity. Bonner embodies a character who savors the rewards of a game he knows is rigged in his favor and who feels not the slightest bit guilty...

Adam Bashian as Paduar is a revelation.  Frankly, he was so wooden in Broward Stage Door’s recent Guys and Dolls that I feared for this show. But in fact, he proves here to be a winning, engaging actor who captures Paduar’s charm and intelligence.

...Gregg Weiner makes the promoter Olson the embodiment of the crass and crude businessman who sold his scruples so long ago. Weiner’s Olson is so certain of his ability to predict the lowest common denominator taste of the public that he is blithely ignorant that his morality is reprehensible.

Special credit goes to fight arranger Pablo Marquez and to Matthew Schaller, an actual wrestler who spars with the actors through much of the show – ironically making the stars of this show look good.


Chad Deity is theater gold. It’s fast and flawlessly paced, insanely funny, a little sobering at the end when its message – like the play’s most defiant wrestler – kicks you in the gut. The script works on several levels at once, turning a normally quiet and observant audience into a bunch of rowdy wrestling fans who can’t stop grinning. This is a play full of physical, emotional and intellectual heft, one staged flawlessly by artistic director Clive Cholerton.

Last seen at the Caldwell in The Whipping Man, Morris (The Mace) is first among equals when it comes to a cast full of superb performances... Relaxed, sardonic, deeply funny, Morris seems to speaking off the top of his head – though of course, given the complexity and intricate timing of Chad Deity, he is not. He has never been better.

The Mace... has plenty about which to wax sarcastic. Like the new character that his boss, Everett K. Olson (or E.K.O., played with slick-huster panache by Gregg Weiner), comes up with...

...E.K.O. takes The Mace’s find, Vigneshwar Paduar or V.P. (Adam Bashian, Morris’ equal in seducing the audience), and repurposes him as an America-hating Muslim wrestler he dubs The Fundamentalist. Never mind that V.P. is an Indian-American with hip-hop swagger, a guy born and raised in Brooklyn.

...Bonner manages to make Chad both self-adoring and self-aware, striking a comically charismatic balance that keeps the audience hooting and rooting for him. Matthew Schaller, the cast’s one actual pro wrestler, plays several American-stereotype opponents while lending the production wrestling authenticity. If there is such a thing

The Elaborate Entrance of Chad Deity did not, as noted, win the 2010 Pulitzer, which was awarded by the full Pulitzer board to the powerful rock musical Next to Normal (opening Jan. 20 at Actors’ Playhouse in Coral Gables). But the drama jury that recommends finalists and winners was oh-so-right in singling out Chad Deity for recognition. The play is a not-to-be-missed treasure from a thrillingly fresh voice in theater.

The Elaborate Entrance of Chad Deity plays at the Caldwell Theatre Company through February 12, 2012.
Posted by C.L.J.