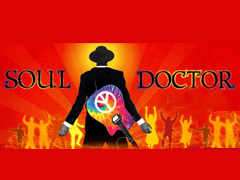 Soul Doctor: Journey of a Rock-Star Rabbi opened at The Colony Theater in Miami Beach on December 25, 2011 The production moves to Fort Lauderdale's Parker Playhouse the following week, where it will play through January 29.


This Broadway-bound hit Musical is an odyssey through challenges and triumphs of the father of popular Jewish music, Shlomo Carlebach: his childhood escape from Nazi Germany, becoming a rabbinical prodigy in America; his unlikely friendship with Nina Simone, discovering Gospel, Soul music; his meteoric rise as a "Rock Star-Rabbi" in the 1960's, performing with Bob Dylan and The Grateful Dead; his struggle to reconcile his deep traditional roots with his desire to reach people of all backgrounds, his personal conflicts trying to keep his family together while traversing the globe as a "Soul Doctor", bringing joy to the broken hearted.


Shlomo Carlebach was a good man, a Rabbi who devoted his life to helping others through his music and generosity of heart and wallet. This is evident from the current musical Soul Doctor now playing on Miami Beach and moving to Ft Lauderdale later in the month.

What's also evident in the show is that the writer/director, Daniel S. Wise let his enthusiasm for Shlomo control his artistic sense. A one and a half hour first act, a fifteen minute break and then an hour fifteen second act is far more wearying than entertaining, despite some really excellent performances.

Three actors play Shlomo, Joey Farber is the youngest, Eric Anderson is the middle aged and Gary Morris is the oldest. All are good singers, and Anderson is particularly endearing, conveying the warmth and otherworldliness of a man who would give his last penny to a stranger rather than save it for his wife and family.

Erica Ash plays Nina Simone and is outstanding. A gorgeous voice, great delivery and looks. Just plain fun to see and hear. Would that the rest of the show was up to her standards.

...With the exception of three numbers, Shlomo Carlebach wrote all the music and it's mostly really good stuff; it's just that there's so much of it that the show becomes repetitious. Billed as being on its way to Broadway, Soul Doctor needs considerable rewriting and tightening to make that a successful journey.


One of the most frustrating evenings in theater is The Mess. One moment, you’re moved by ineffable loveliness, the next you’re groaning at ham-handed ineptitude. Such is the careening quality of the new biographical musical Soul Doctor, subtitled The Journey of A Rock Star Rabbi.

The musical hops, skips and often trips over the bullet points in Carlebach’s life: a Holocaust refugee who rejected some strictures of Orthodox Judaism in favor of a humanistic, loving ethos. From the 1940s through the early-1990s, the composer built an evangelistic career reclaiming disenchanted Jewish youths and performing his songs in coffee houses and rock festivals from San Francisco to Moscow to Jerusalem.

That is, in fact, Soul Doctor’s primary asset: Carlebach’s melodies soar and swell like human emotions transmuted into musical notes.

What sinks this show is lead-footed scene after scene written by director Daniel S. Wise. Time and again, Wise gives us one-dimensional characters playing out clichéd situations with hackneyed pronouncements.

Just as destructive are Schechter’s lyrics that veer from occasionally evocative to frequently banal. One lyric has a lost soul in Washington Sqaure appeal to Carlebach: “Doc, can you help me score some ‘ludes / So I don’t have to resort to glue.”

But every time you’re ready to give up on the show, a Carlebach melody snares your spirit or a performance resonates with your core. For instance, Merideth Kaye Clark plays that lost soul who attaches herself to Carlebach only to lose him to another woman. Clark wraps her vibrant mezzo-soprano around the genuinely moving lament, “I Was A Sparrow” which contains Schechter’s best lyric.

...most notable is Erica Ash who kicks the show up several notches every time she strolls onto the stage as Carlebach’s buddy, the famed chanteuse Nina Simone. Her appearance 45 minutes into the show, crooning a sinuous “I Put A Spell On You” (not a Carlebach tune) just underscores the mediocrity of all that came before. As an actress, she’s even convincing putting across Wise’s cardboard dialogue.

Another asset is actor Eric Anderson in the title role. Tall, bearded, with a quiet magnetism, gentle smile and shining eyes, Anderson not only has a stirring voice but you can see the pure joy of the music transfix his face every time he sings. His Carlebach visibly evolves from an introverted scholar who clasps his hands at all times into to an emissary of love with outstretched arms.

This next part is where Bill Hirschman stands out from the other reviewers; while it's obvious he was disappointed in the show, he recognizes that a lot of solid work has gone into it:


Credit the producers with investing resources in this effort. They have a cast of 18 Equity actors, several with Broadway credits like Liz Larsen playing a stereotypical sitcom Jewish mother. A six-piece band is especially tight and versatile in its ability to play a wide range of musical styles. The set by noted designer Neil Patel is a metal framework behind some less impressive roll-on doors, but the lighting Jeff Croiter and Grant Yeager is evocative enough to smoothly differentiate among 37 scenes. Choreographer Gerry McIntyre also injects professional caliber values into the production.

Soul Doctor: Journey of a Rock-Star Rabbi plays at The Colony Theater in Miami Beach through January 8. The production moves to Fort Lauderdale's Parker Playhouse the following week, where it will play through January 29.
Posted by C.L.J.