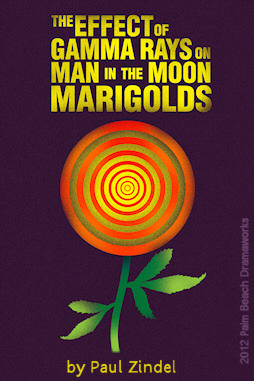 Palm Beach DramaWorks opened its production of The Effect of Gamma Rays on Man-on-the-Moon Marigolds on January 6, 2012.


This Pulitzer Prize winning play depicts a mentally unbalanced woman's far reaching effects on the lives of her two daughters, and a young girl's struggle to keep her focus and dreams alive.


William Hayes, the company's artistic director, has given Mr. Zindel's play the kind of revival of which every frustrated playwright dreams, one so profoundly comprehending and persuasively acted that you'll leave the theater wondering how "Gamma Rays" could ever have been forgotten, however briefly. Enhancing the immediacy of the staging is the troupe's unusually shallow 218-seat theater, whose last row of seats is only 34 feet from the stage. The handsome new venue, which opened in November, manages to preserve the striking intimacy of the fast-growing company's old 84-seat performing space.

Above all, though, Beatrice must be played not as a blimplike monster of malice but as a life-size woman at the end of her frayed rope—and Ms. Turnbull delivers the goods. Never for a moment does her vicious bitterness smack of the stage. Her performance as Beatrice Hunsdorfer is as real as a hangover...

Ms. Hoffman, a high-school senior who is Ms. Turnbull's real-life daughter, is more than equal to the challenge of playing a shy, mousy character without letting her become dull. Ms. Coyne's part is flashier and thus easier, but she is every bit as credible as her colleagues. Gracie Connell is excellent in the small role of Tillie's odiously smug competitor at the science fair, and Harriet Oser, who plays the Hunsdorfers' senile boarder, is heart-catchingly memorable without saying a word.

Mr. Hayes's chief contribution to the proceedings is to keep every element of the production, including the performances, in perfect equipoise. Nothing is exaggerated or disproportionate. He has also assembled a stellar production team led by Michael Amico... and Sean Dolan, the lighting designer... Rarely have I been so moved by a play, or so impressed by the company that produced it.

Phillip Valys reviewed for The Sun-Sentinel:


Although "Marigolds" is technically an ensemble piece, it might as well be a one-woman showstopper given the abundance of strong dialogue thrust upon Turnbull. This isn't a slight against the play, or even a foible: Turnbull is stunning as an unraveled, unwilling mom who kills ambition faster than government welfare, and her supporting cast of daughters is top-notch, especially Nanny (Harriet Oser, who radiates even in a non-speaking role), the elderly live-in who's the latest in a series of boarders Beatrice has taken in to supplement her income.

Kudos to set designer Mike Amico, who has transformed the Hunsdorfer's household into a shut-in's paradise: tablecloths and other linens are strewn about, and not a drop of natural light filters inside thanks to the bedsheet taped over the entrance window.


The production, steered by William Hayes, is engaging, but unbalanced. Dynamic performances by Laura Turnbull as Beatrice and Skye Coyne as Ruth overshadow Arielle Hoffman’s self-effacing, and somewhat wooden, Tillie.

True, Zindel doesn’t give Tillie many lines, although the most poetic parts of the script are Tillie’s recorded monologues marveling about the wonders of the atom.

Turnbull’s carefully calibrated performance fully exposes Beatrice’s failings, as the character bullies her daughters, verbally abuses the witless old woman who boards with the family, and wallows in self-pity. On the other hand, Turnbull makes it impossible not to feel compassion for Beatrice, when the character stands alone, helpless as a child, after an old taunt pierces her armor.

Coyne’s Ruth is a luminous presence, as she flits across the stage, motor-mouth fully engaged, or shudders in an epileptic fit.

Harriet Oser delivers a remarkable performance as Nanny, the elderly boarder, especially as she doesn’t say a word.


Making her professional debut as Tillie is Arielle Hoffman, a high school senior with a promising future as an actress. The play allows her little opportunity to express her inner turmoil, but she manages to do so wordlessly. And late in the evening, as she confronts her fears and addresses a school assembly about her science project, we begin to see glimmers of Tillie’s inner strength.

Hoffman is overshadowed by Laura Turnbull -- who happens to be her real-life mother -- devouring the role of volatile Beatrice. She is despicable to be sure, yet without softening any of that, Turnbull lets us see the humanity underneath her armor. Credit director William Hayes with deftly orchestrating his cast, including Skye Coyne as Ruth and a frail-looking Harriet Oser as Nanny, an aged boarder to whom Beatrice rents out a room to and belittles.


For an actress who has the reputation of slipping into a character as effortlessly as a favorite nightgown, Turnbull's Beatrice only captures this essence sporadically. Her laugh lines — she defames her daughter's Jewish teacher by calling him a "Hebrew hermaphrodite" — sound like over-rehearsed laugh lines, effective by intent rather than by incident. The mechanism of acting is ever-present and, as a result, Beatrice never feels like a lived-in, worn-in being.

By the time The Effect of Gamma Rays winds toward its tragic end, director William Hayes has smoothed over its bumpy beginnings. All the cogs run smoothly toward a downer of a denouement that finds Coyne, as Ruth, expressing hurt and rage like a veteran of the stage, her cheeks flush with red. She'll have a nice future in a South Florida theater scene scant on capable teen actors.


This edition of Paul Zindel’s The Effect of Gamma Rays on Man-in-the-Moon Marigolds skews to the darker side... because of the overwhelming bravura performance of Laura Turnbull as an embittered, self-pitying mother wildly striking out at her daughters as displaced revenge for the blighted tragedy that chance has made of her life.

It’s a scathing, fearless portrait by a great actress with a solid director that leaves everything else, as the apt cliche goes, in the shade.

The welcome revival of the 1970 drama is an engrossing evening of theater that features a sometime lyrical, sometime blunt Pulitzer-winning script that few audience members have seen before. Dramaworks Artistic Director William Hayes has guided a strong cast through this examination of the dysfunctional Hunsdorfer family who the Fates themselves have seemingly cursed.

Tillie (sensitively created by Turnbull’s real daughter Arielle Hoffman) is painfully shy and profoundly lonely. Hoffman inhabits someone who expects withering criticism or, just as bad, blithe indifference from the one person who should nurture her.

Beatrice (Turnbull) is marginally kinder to Ruth (well played by Skye Coyne), a troubled girl-woman who is extroverted but emotionally unstable and subject to epileptic fits.

One of Hayes’ judgment calls seems to have been to soften some of Beatrice’s razor edges. While that robs the early scenes and even the play as a whole of some of the dramatic punch, it allows us to feel compassion for a complex human being crushed by decades of external forces that have deformed her soul, more Medea than monster.

Praise must be saved for Oser in the completely wordless role of the frail husk of a human being roundly abused by Beatrice’s harangues, whose eyes barely register a cup of hot water slammed in front of her, and then go dead again as the woman’s mind slips in and out of the world around her. Oser delivers a terrifying and brilliantly executed portrait of senility that is far more eloquent than two-thirds of the performances we’ve seen in this terrific season.

Set designer Mike Amico has created an intentionally drab living room, the retro-fitted remains of an old vegetable retail store which itself exudes a sense of hopelessness. As always, Amico is a master of tiny details... It’s evocatively lit by Sean Dolan who coats the stage with a dappled effect when Tillie is absorbed in her reveries about of science.


Turnbull, who crafts a relentlessly fierce performance under the direction of William Hayes, is fearless in creating a woman who is largely the stuff of nightmares. If you have or had a loving, supportive mother, Turnbull’s dream-crushing Beatrice will make you appreciate your good fortune that much more.

Outgoing elder daughter Ruth (a luminous Skye Coyne) has already chalked up one nervous breakdown, likely having something to do with a mother who trades cigarettes for back rubs. Younger daughter Tillie (the radiant Arielle Hoffman, making an impressive professional debut), whose award-winning science project gives the play its clunky title, is a quiet dreamer whose curiosity and optimism have miraculously not been snuffed out by her unsupportive mother. Not yet, anyway.

Dramaworks’ artfully realized production - the striking, oppressive set by Michael Amico, with lighting by Sean Dolan, costumes by Brian O’Keefe and sound by Steve Shapiro - is often difficult to watch, as the emotional pain Beatrice visits on the others is palpable. Yet anyone who appreciates grand performances will want to catch Turnbull’s unflinching portrait of a monster. Hers is a masterful achievement.


Turnbull, frumpy in slippers, cigarette in hand, drink in another, dressed in nightgown and house coat, needing only pink rollers in her hair, commands the stage with her presence. She can solo on stage with no dialogue and accompaniment and keep you captivated.

Her real-life daughter, Arielle Hoffman, a senior at Coral Springs High School, ably plays opposite her as her science-obsessed daughter, Tillie.

Skye Coyne, a Miami native, plays the older sister, Ruth, who is at once embarrassed and proud of her younger, geeky sister. Coyne captures the audience with her self-possession, boundless energy and heart worn on her sleeve.

Ultimately, Engoren doesn't manage to tell us very much about the production.  While I suppose it's nice to know that the audience "gasped" or "responded enthusiastically," I'd rather know what made the production work, or where it missed the mark and why.  "Turnbull commands the stage with her presence" is a given; she's Laura frickin' Turnbull; of course she commands the stage.

We hope that either Engoren either starts writing actual reviews, or gets shit-canned, because right now she's not performing any useful function.  There has to be a writer who can produce something worth reading in that space.
The Effect of Gamma Rays on Man-on-the-Moon Marigolds plays at  Palm Beach DramaWorks through January 29, 2012.
Posted by C.L.J.