In a year filled with extraordinary and varied theatre presentations, nominations were spread throughout the region, from Jupiter to Coral Gables, with 13 companies receiving nominations, and 28 of the 68 eligible shows that opened in 2011 given recognition.

Palm Beach County theatres soared ahead with 43 nominations, followed by Miami-Dade with 28, and Broward County with 27 nominations.

The awards ceremony will be held at the Broward Center for the Performing Arts on April 2, 2012.  And this year, there are no forgone conclusions; it was a year of incredible high production value, and it's the first time we can recall where every single nominee makes complete sense.

When you're finished with the list, here's some other stuff to read:

Busy Busy Busy
The Miami Herald reports that it's the peak of theatre season in South Florida.


...this month is insanely busy on South Florida stages. More than a dozen local professional productions are running or soon to open, augmented by that reliable powerhouse Jersey Boys and other touring fare.

Shuffling those Tiles
Mosaic Theatre announces a change in its season line-up.

Speaking of Changes
Florida Theater On Stage reports that Costume World won't be buying  Stage Door Theatre after all.


Costume World's CEO Marilyn Wick confirmed Wednesday that the deal has stalled, although both parties said a slight possibility exists of salvaging the deal sometime in the future.

Since The Drama Queen reports that Stage Door just announced a 2012-13 season in the Coral Springs venue, we wouldn't recommend that anyone hold their breath.

Speaking of Season Announcements
The Alliance Theatre Lab announces their 2012 season; and it's bold.


We are extremely proud to announce that our 2012 Season will be dedicated to solely presenting original works. After the success of last season's Brothers Beckett, we couldn't be more thrilled to embark on this exciting adventure!

Note that this isn't the niche filled by the late Florida Stage, which produced soley NEW works.  Alliance is talking ORIGINAL works, which means they're creating plays from scratch.  Like we said, BOLD.

Cabaret Comes to Life
Edge Miami goes behind the scenes at the Maltz Jupiter Theatre.  Their production of Cabaret opened to rave reviews this past weekend.


"This is the 1998 revival that is more powerful and grittier than the movie we all remember so well," Kato said. "We are really lucky to be able to bring this to South Florida with B.T. Nicholl, the premier director authorized to produce this version."

Everybody Loves a Parade
The Sun-Sentinel talks with the founders of one of South Florida's newest theatre companies.


"When you grow up dreaming of theater, you aren't thinking of competition," said Caplin with a laugh last Thursday afternoon from the sun-lit dining room of a Starbucks in Boca. As her friend and Parade partner Kim St. Leon watches on, Caplin bends over a turkey patty flecked with shredded lettuce and flicks the floppy kaiser bun across the plate. She carves off a piece of patty and takes a mouthful ("I'm a starving actress," she adds with a smirk) before continuing.

"You're thinking of creativity. Theater is a vital part of the human experience, the mirror that shows us what society is about. The key is, you want more theater than you fear the economy," she said.

Speaking of New Theatre Companies
Talkin' Broadway talks with the founder of another new company in town; Alan Jacobson, who is opening The Plaza Theatre in Florida Stage's old digs at Manalapan's Plaza Del Mar.


Jacobson hopes to be self-sustaining, covering basic operating expenses through ticket sales and classes. His operating budget has not yet been set but he will be opening his first season with a small staff as he establishes the new theatre. The scheduled March closing of the nearby Ocean Avenue bridge for lengthy repair may slow traffic a bit, but not Jacobson's optimism. He has already received a $10,000 donation and is fielding multiple calls from parties interested in bringing their shows to The Plaza Theatre.

Shockingly Good
The hot ticket this month is Next To Normal at Actors' Playhouse, and it hasn't even opened  yet.  The Miami Herald explains what all the fuss is about.


The searing, shimmering rock musical Next to Normal, which began as a 10-minute musical workshop piece on electroconvulsive therapy (ECT, today's version of shock therapy), is an extraordinary addition to that genre. With a Tony Award-winning score by Tom Kitt and Brian Yorkey, the musical about a woman's struggle with bipolar disorder was awarded the 2010 Pulitzer Prize for drama.

The 2010 Pulitzer, bestowed by the award's board (which bypassed the drama jury's three suggested finalists, including Kristoffer Diaz's The Elaborate Entrance of Chad Deity, now playing at Boca Raton's Caldwell Theatre Company), was an unexpected thrill for Kitt and Yorkey. Theirs is just the eighth musical to win the drama Pulitzer, after Rent, Sunday in the Park With George, A Chorus Line, How To Succeed in Business Without Really Trying, Fiorello!, South Pacific and Of Thee I Sing.

We've heard from Playhouse insiders that the music wafting from the rehearsal hall is amazing.

Yet Another (noun) The Musical Production
The Shiny Sheet has the story of a how musical about divorce came together; Divorce Party the Musical is playing at The Kravis Center.  Speaking of which, why hasn't Dave Arisco directed Musical of Musicals (the Musical) yet? 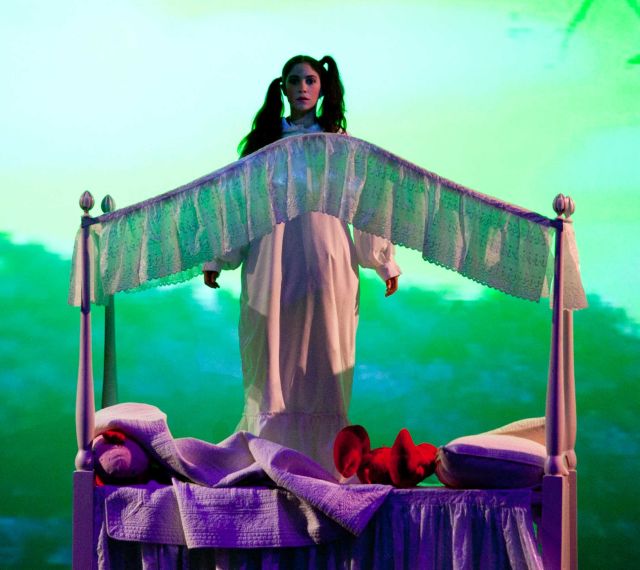 BroadwayWorld reports that Alice's Adventures in Wonderland is returning to The Playground Theater in Miami Shores.

A Joyful Noise
BroadwayWorld tells us about the Entr'Acte Theatrix production of Godspell, which played last weekend at someplace called The Borland Center, and plays this weekend at the Flagler Campus of the Palm Beach Day Academy.  It's an appropriate space: it used to be a Unity Church.

Meanwhile...
...in Palm Beach, the Royal Poinciana Playhouse is still closed.  But The Palm Beach Daily News reports that it's likely to remain standing for the foreseeable future.


Building Official Jeffrey L. Taylor has determined the Royal Poinciana Playhouse appears to be in good shape, though it needs a new fuse panel... Commissioner William Cooley pushed for the inspection in December, suggesting that the landmarked building's owner is allowing demolition by neglect.


Well, the little skater boys decided to get in and destroy the place, you can't see it from the exterior, but they broke all sorts of glass inside, including computer monitors and other things.

The Grapevine also mentions that squatters were in residence at some point.
Posted by C.L.J.