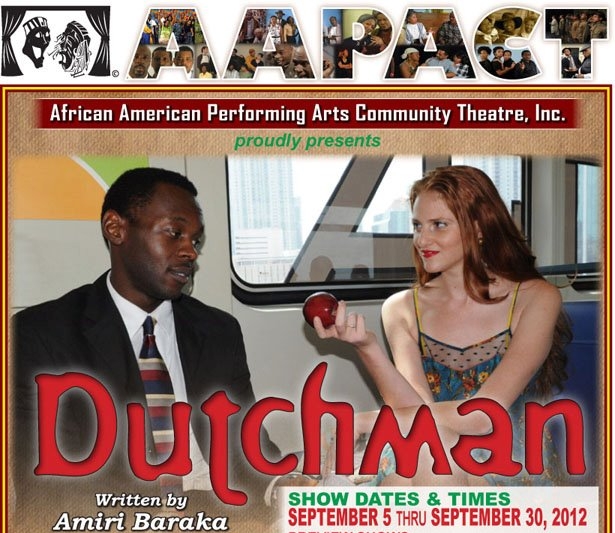 
Amiri Baraka (Leroi Jones)’s groundbreaking play about race relations stunned audiences in 1964.  A sinister, neurotic white girl, Lula, with the provocation of her lovely, half-naked body and of her startlingly lascivious speech, lures to his doom a good-looking young black man, Clay, a stranger whom she has picked up in the subway and whom she mocks for wearing the clothes and employing the voice and manners of the conventional white intellectual. Some free and discounted tickets are available.


Though written in 1964, Dutchman has lost none of its sting since its debut almost 50 years ago at Off-Broadway’s Cherry Lane Theatre. This play is the opposite of the safe-bet, crowd-pleasing fare that so many nervous South Florida theater producers choose.

Director Teddy Harrell Jr. has Umoh underplay Clay initially, giving the actor room to build toward his explosive, physically violent confrontation with Kats’ Lula. Kats has the tougher task, because Lula doesn’t behave the way any remotely sane woman would. She’s one of those crazy subway riders who would make you flee to the next car or get off immediately, no matter how far you were from your stop.

Umoh and Kats deliver the play, though more finesse from both would make Dutchman land more powerfully. And though this play is a political allegory that sometimes wanders into the surreal, the complete lack of reaction by the silent passengers to Lula’s racist diatribes — symbolic though that may be — just doesn’t fly.


...The script of Amiri Bakara’s classic 1964 play of racial and sexual politics crackles with the explosive rage that Langston Hughes’ predicted in “A Dream Deferred.”

The fact that this production doesn’t find that passion or electricity until two-thirds of the way through the 40-minute play doesn’t prevent the audience from appreciating Bakara’s themes or enjoying the laudable aspirations of the ambitious production directed by Teddy Harrell Jr....  once the too languorous plot takes its key turn, the production barrels like a subway that has lost its brakes. It just takes a long while for this train to leave the station.

...why this production – which seems set in an Everytime – doesn’t quite work for the first two-thirds of the piece... Dutchman’s initial dramatic tension relies heavily on the potential of fatal fallout in 1964 if a black man was seen in public enjoying sexually-laced interaction with a white woman regardless of who initiated the contact.

Harrell has Umoh, a 2008 Barry University theater grad, play the first section as someone too laid back rather than someone carefully controlling his emotions. But when Bakara gives him that monologue, Umoh justifies his casting with a blistering performance accented with flashing eyes and an anguished voice.

...Kats makes Lula’s slightly unhinged actions believable, like a drunken party girl self-destructively testing the boundaries of what society will allow. She also puts across the underlying contempt and arrogance of a white person confident that she can toy with any black person. Munching on and tossing away half-eaten apples, Kats makes a convincing Eve luring Adam to his doom.

If the production is flawed, AAPACT deserve praise for courageously delivering a play that few other companies would even dream of chancing.


It would be easy to say that Dutchman, first performed in 1963, is a one-act play about a straight black man and a crazy white woman. But that would be a disservice to the underlying tone of the play.

The root of the story, depending on which audience member you ask, is how society eats up black men and spits them out. Or how women can sometimes bring out the worst in men. Or that there’s always a way out of any situation if you’re willing to take it.

In the actor arena, Umoh gives a method performance as the black Everyman of that era. Clay is living between the memory of his parents who have had to stay quiet in the face of racism, and the reality that change is on the horizon, while all the while seething in anger.

Kats, whose Leulah is two parts crazy and one part evil, tries to get in the headspace of a woman who clearly has issues with black men. However, it feels as if there’s a layer to Leulah that never gets explored... there’s not enough motive to explain her actions.

AAPACT presents its production of Dutchman at the Wendell Narciesse Theater through September 30, 2012.
Posted by C.L.J.