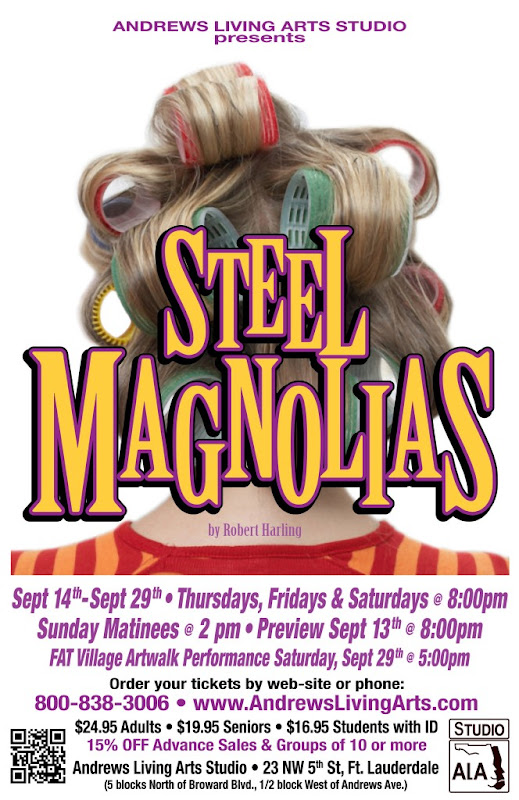 
Robert Harling’s 1987 comedy-drama about the bond among a group of Southern women in northwest Louisiana, set in Truvy’s beauty salon in Chinquapin, Louisiana, in the 1980s where all the ladies who are “anybody” come to have their hair done.


What’s different about Andrews Living Arts Studio’s uneven new production is that, atypically, it’s the pathos that works far better than the comedy.

At the same time, Magnolia requires whip crack comic timing to make the most of Harling’s snappy repartee. That’s sorely missing from this production. The actresses are noticeably a second late in picking up their rejoinders most of the time. A few don’t have the lines memorized well enough to effortlessly spin the jousting banter. That robs the evening of the crucial electricity in the stretches when Harling’s wordplay is its primary strength.  It gives the entire outing a whiff of amateurism in an ostensibly professional production.

Reyes is the most polished and potent actress of the sextet, especially in her private scenes with her daughter and her meltdown in the final scene. But it’s Aranes who energizes the show when she enters a scene, especially her first appearance when she actually twirls into the room... Murray fits comfortably into the role of a curmudgeon with a heart...

One interesting casting choice was Bandel, an African American woman. Of course, no one would suggest this is an exclusively white play: Lifetime television network has slated a new version to be broadcast Oct. 7 with a cast that includes Queen Latifah, Phylicia Rashad, Condola Rashad, Alfre Woodard and Jill Scott.

You have seen or will see a stronger production, but this is one of the better offerings from Andrews Living Arts which has exquisite taste in choosing shows (Angels In America, Equus, Avenue Q) but often struggles to pull off its vision.