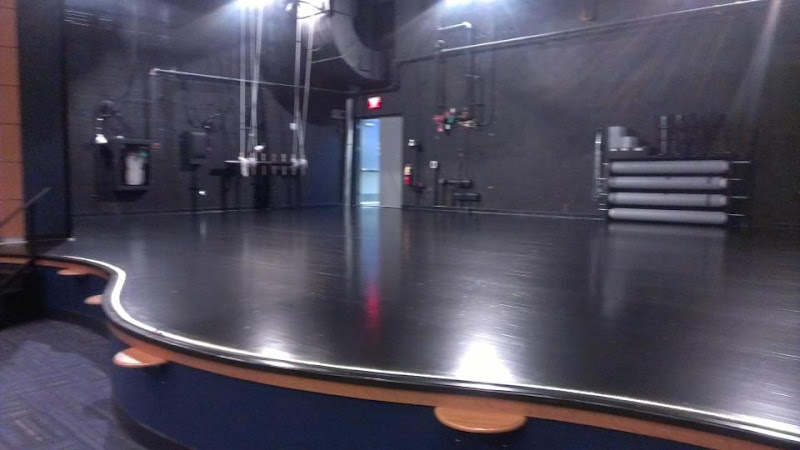 It's another Monday, which means it's time for your Monday reading list.

Just a reminder that we're still collecting submissions for "dark" theaters to head this list every week; we've been lucky so far, but we have no reserve.  All we ask is that the theater is "dark," that is, no performance or rehearsal going on.  But there can be a set on stage, or it can be a shot of your seats, or any photo that we can look at and know that it's a Monday.

This week's theatre is The Aventura Arts & Cultural Center.  This is an intimate center run by the City of Aventura, tucked away back on the intercoastal waterway.  As you can see, they've just painted the stage.  The little scallop shelves are for their front of house fills.

Making Connections
One of the points that Florida Theater On Stage brought up in their recent articles is that local theater companies tend to be very insular; so concerned with getting their projects up and running, they're not really connecting to the arts scene as a whole.  And wouldn't you know, connecting is the topic of this article in Butts In Seats.

Tour a Classic
Critical Miami takes a tour of the Olympia Theater (a.k.a. The Gusman Center), and posts plenty of pictures.

Speaking of Tours
The Book of Mormon is going out on tour this season, after all, and Broadway World reports that it's coming to The Broward Center for the Performing Arts.

A Bit of This And That
Florida Theater On Stage posted some information on last minute shows, which seems odd, and it means you've missed them, but Bill also has information up about how you can help GableStage raise some money, and it won't cost you anything but a minute or two of your time.

This Company will Expire...
Theater Communications Guild reports on the planned demise of 13P, a company built to close upon completion of its limited mission; the production of a play by each member playwright.

In 2003, playwrights Handel and George, tired of endless new-play development cycles, gathered 11 other early and mid-career playwrights together... The group set out to make a producing collective with a bold tagline: “We don’t develop plays. (We do them.)” Each playwright would become artistic director for her production, and a volunteer staff would help with the nitty-gritties of production. A proper press representative would be hired, and Handel, who had fundraising experience from the Mark Morris Dance Group , would work to ensure the group’s future life. But the future had a clear endpoint: Each writer would have a play staged, and one play only. After that the group would dissolve.

It's worth considering this approach; how many companies start with a bold or clearly stated mission, only to run out of steam after a few years?  Perhaps it's time to change the scope of our approach.

It's a Small World.  Really.
Florida Theater On Stage talks with two holocaust survivors who reunited by chance while attending A Shayna Maidel at the Broward Stage Door Theater.

Meanwhile...
...the Coconut Grove Playhouse is still closed, which has led the State of Florida to begin proceedings to take it back from the current Board of Directors, according to The Miami Herald.  Things were progressing until Aries Development Group tried to feed their greedy maw.
Posted by C.L.J.