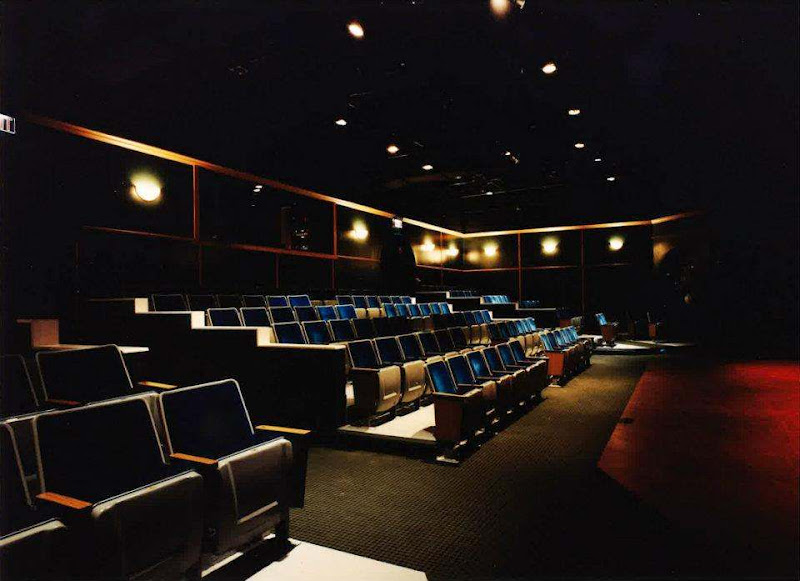 It was a dark and stormy weekend - forgive the literary reference, but it was a good weekend to be inside watching a play.

This week's "dark" theater is GableStage, currently running Lynne Nottage's Ruined.  GableStage was originally formed as the Florida Shakespeare Theatre back in 1979, staging outdoor productions at Vizcaya.  By 1987, they were working out of The Minorca Playhouse, producing a wider range of plays.  After Hurricane Andrew decimated the building, they found a new home, tucked away in a corner of the Biltmore hotel.  The company re-christened itself GableStage in 1999, the same year Joseph Adler took over as Producing Artistic Director.

In truth, this theatre is rarely "dark."  Adler is generous with his space, often letting new companies test the waters with play readings on his stage on his off nights.

Enough with the history lesson; here's your Monday reading list:

Caldwell Theater is Going... Going....
South Florida Business Journal reports that the court has granted Legacy Bank a $6.7 million dollar foreclosure settlement against the Caldwell Theatre Company.  The theatre will go up for auction on October 16 as a result of this action.  Legacy Bank itself is in financial trouble, which no doubt has made this a larger issue for them than it might have been otherwise.  It's a sad day for what was once one of the heaviest hitters on the South Florida theatre scene.

Sometimes They Come Back
Backstage recounts how California's famed Pasadena Playhouse went bankrupt - and came back from it.

The venerable 686-seat theater filed for Chapter 11 bankruptcy protection in 2010 with a debt burden of $2.3 million. But soon after the Playhouse, which dates from the early 1920s, received a $1 million gift from an anonymous donor that helped it restart production.

So it's not impossible.  Heck, Adrienne Arsht could have underwritten every theatre in South Florida for years with what she donated to the performing arts center that bears her name.  It's a matter of finding the right member of the 1%.

Metamorphosis
miamiartzine talks with Stephanie Ansin, artistic director of The Theatre Formerly Known as Playground.  Henceforth, the company is the Miami Theater Center.

Although they will still produce children's theatre, PlayGround is now part of Miami Theater Center. So is The Sand Box, a small black box in the same building that is primarily used for furthering young, adventurous companies. O Cinema, the art film house in Wynwood is now in partnership with MTC and will be showing films there that tie in with the stage production.

Ch-ch-ch-changes
The Play- um, we mean, Miami Theater Center isn't the only company stepping up its game.  The Miami Herald reports on the ground breaking at the Broward Center for the Performing Arts. The work includes renovation of all the performance spaces, and more:

The $50 million project, scheduled to take place in three phases and to be completed by January 2014, will add about 40,000-square-feet of space for arts and education programs, including a new educational center with a studio theater and classrooms, and a two-story waterfront pavilion on the north bank of the New River that will house a banquet hall, conference rooms and a restaurant.

The work on the Au-Rene Theater will be completed in time for the opening performance of Miami City Ballet on October 26.

Three Takes on the Upcoming Season
We can't remember if we already posted Florida Theater On Stage's season preview, but since they've posted it again, we might as well, too.  And while we're at it, here's the South Florida Gay News take on the upcoming season.  And oh, look, The Miami Herald has theatre critic Christine Dolen's five top productions for this season.

South Florida Represented
Playbill reports that Anastasia Barzee was among the performers in Sunday's OBAMARAMA: Songs for Justice!, a cabaret fundraiser held yesterday in New York City.  Ms. Barzee is a Miami native who graduated from UM, attended the Burt Reynolds Institute for Theatre Training, and performed at a few local venues before heading up to New York, where she is now a leading Broadway actor.  The Broward/PalmBeach New Times reviewed her album back in May, complete with a video.

Talking in the Green Room
Florida Theater On Stage chats with actor/director/stage manager/mother Amy London, who is also the current executive director of The Carbonell Awards.

What was the worst on-stage mishap you dealt with? Well, when I toured as (production stage manager) with Cotton Patch Gospel, in one Southern town we had threats from the KKK, and we were performing in a huge outdoor venue. We went on. I was seriously afraid of snipers. Police everywhere. It was bizarre.

State of the Arts
The Miami Herald talks with arts leaders in Miami-Dade County about the future of the arts in South Florida.

As Miami teeters between aspiration and achievement, it seems a good time to ask what the city needs to become the world-class cultural center it aspires to be.

Funding is always an issue, but the people we spoke to yearned for more intangible things: more leadership, business involvement, awareness of an already wide range of arts offerings, more focus on artistic substance and less on scene-driven excitement. And more bike paths and bus lines.

Red Flags
Quills and Callbacks lists all the warning signs that an audition listing isn't for a legitimate project.  They also list the hallmarks of a legitimate casting call:
Martha Swope Retrospective
You've undoubtedly seen Ms. Swope's photographs of Broadway productions; they appear in numerous textbooks.  But you may not know that her son lives in West Palm Beach, and you certainly don't know that Gordon McConnell and Christopher Jahn rented an apartment from him in the late eighties and early nineties. I remember the first time I met her; she was excited to learn that her son had actors under his roof, and she came to see us in shows when she was in town. Admittedly, her ties to South Florida Theatre are tenuous at best, but she's a sweet lady, and a great photographer.  You can read the story of her current exhibition on The New York Times, and see some of the photos with recorded commentary HERE.  They're worth a look.
Posted by C.L.J.