At some point today, Florida Theater On Stage is releasing the first of three stories dealing with the past, present, and future of theatre.  We'll be dealing with those separately, as they appear, as it seems they'll be comprehensive articles.

There are some plays opening this week, so of course there are advance stories about them; and the usual odds 'n' ends of articles.

Casting News
Both Florida Theater On Stage and The Drama Queen  posted articles within hours of each other reporting that some theaters have already cast several shows this season.  The latter called it "hot" casting news, and included this photo of Betsy Graber and what's his name. 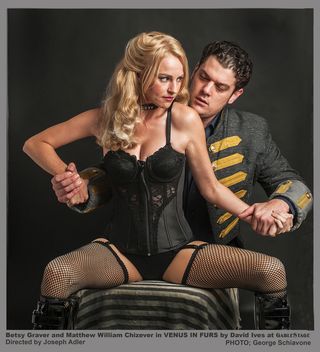 Oh, yeah.  I mean, yes, that's Matthew Chizever, and the photo is by George Schiavone.  Of Course.

Speaking of Casting
TheatreMania reports that Tom Wahl will star in Zoetic Stage's upcoming production of I Am My Own Wife.

Meanwhile, in Southern South Florida
BroadwayWorld reports that the southernmost venue in Metro South Florida has announced its season:  The South Miami-Dade Cultural Arts Center will be presenting a mixed bill that includes a production from The Asolo Theater, The Actors' Gang, and the national tour of A Chorus Line.

Big Blurb
Hat tip to Mad Cat Theater for pointing out this blurb on the Miami New Times site about The Dutchman, the AAPACT production that's opening Thursday at the African Heritage Cultural Arts Center.

Speaking of The Dutchman
The Miami Herald also mentions the play, along with a food truck event at The Arsht Center.

Out of Africa
The Miami Herald does an in-depth story on Lynne Nottage's Ruined, opening this week at GableStage.


Lela Elam, a South Florida actress and Carbonell Award nominee for her work in Nottage s Intimate Apparel at GableStage, is preparing to take on one of the most challenging roles of her career, playing the brothel operator Mama Nadi in Ruined. She pinpoints one of the reasons audiences embrace Nottage s work: She tells stories that are real, but they seem unbelievable.

Means of Production
HowlRound takes a look at how some theatre companies around the country approach getting their productions on stage. Well, not really.  Well, maybe.  Heck, I don't know, it's what I thought the article would be about.  But then there are statements like this one, from playwright Erik Ehn:


I m looking to generate plays that are anarchic in structure and syndicalist in their means of production.

Whatever happened to "telling a story?"

It's Jimmy's Show
This review of the Kopit/Yeston Phantom in The New York Times is relevant here only because South Florida's James Danford is Production Stage Manager on the show.