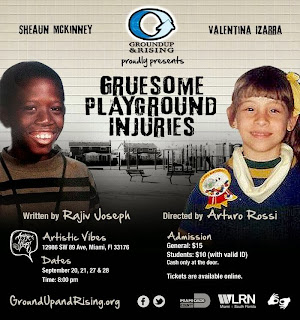 Ground Up and Rising opened its production of Gruesome Playground Injuries at the Miami Beach Botanical Gardens on September 15, 2013, and then relocated the production to Artistic Vibes for the remainder of the month of September.

Two eight-year-olds’ lives collide in the nurse’s office: Doug rode his bike off the roof and Kayleen can’t stop throwing up. As they mature from accident-prone kids to self-destructive adults, their broken hearts and broken bones draw them ever closer. These two rebels may only be fit for one another. But how far can one person go to heal another’s wounds?


Rising’s sad and ultimately moving production of the somewhat murky script for Gruesome Playground Injuries, the answer may be “not at all.”

Even with a classroom whiteboard announcing their ages and locations between each scene, this shattered arc is difficult to follow. But the trick is just to sit back and let it wash over you. By the time they get to the last scene – finally one occurring in chronological order – Joseph’s vision will be clear.

That’s credited directly to the director Arturo Rossi, co-founder of this ragtag shoestring company performing around Miami. He knows where this play means to go and deftly adds brushstrokes all evening until he completes the portrait. He’s hampered by Joseph’s script which is so elliptical and often too prosaic to hold the audience’s attention. But the show still carries a slow-moving wallop because of him and his cast.

These are difficult roles because the characters as written are too quirky to be completely believable, yet McKinney and Izarra succeed in investing both with a mercurial array of emotions.

McKinney, a veteran of Ground Up’s troupe, has an imposing muscular, loose-limbed physicality of gentle genial giant, but he has the capability of erupting scorching lava. The sole quibble is that he sometimes speaks a little too quietly and little mush-mouthed. Izarra has a dancer’s grace and emits the aura of a tortured soul who long ago gave up on any hope of a genuine relationship with anybody. As per the script, they don’t exude any romantic chemistry, but there is a sense of kindred spirits cautiously trying to make connections but shying away before consummating emotionally.

We saw this play at 2nd Stage in New York starring Pablo Schreiber (The Wire) and Jennifer Carpenter (Dexter). While the play had more polish and plausibility there under Scott Ellis’ direction, the work here by Rossi, Izarra and McKinney actually lands a far more emotional punch.

With Rajiv Joseph’s Gruesome Playground Injuries, the company has found an intimate, challenging play for its newest venue. Director and Ground Up cofounder Arturo Rossi has a strong two-person cast in Sheaun McKinney (another Ground Up founder who was, like Rossi, featured on the first season of TV’s Graceland) and Valentina Izarra.

Each scene is a snapshot, a device underscored by director Rossi as a wordless photographer who captures the place (hospital, school, psychiatric ward) and time of each encounter. Moving gracefully in a choreographed way, the actors achieve their time-traveling simply...

Izarra is very much the adult actress playing a kid in the childhood scenes, but her Kayleen impressively ripens into a furious, damaged, self-destructive woman. McKinney brings just enough rough-and-tumble whimsy to little Dougie, and he makes the grown-up Doug’s longing for Kayleen, the character’s belief in her healing powers, utterly convincing.

Ground Up and Rising presents Gruesome Playground Injuries at Artistic Vibes through September 28, 2013. They've added a matinee on October 6.
Posted by C.L.J.