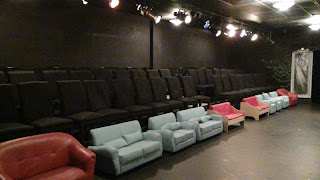 Summer officially ended yesterday, as we passed through the autumnal equinox.  We're officially in Autumn, and the Theatre Season is coming online full strength.  The Wick had a successful opening of The Sound Of Music, GableStage is getting strong feedback on Sons of the Prophet.

Today's "dark" theatre is Boca Raton's Sol Theatre, which is home to Sol Children's Theatre Troupe, and Evening Star Productions, which launches this weekend with I Remain... Jane Austen.  It's surprising how large the theatre is, given the tiny size of its lobby.


Question: When did you start performing?
Jones: I was 12 years old. My parents were Shakespearean actors in New York. They [later] opened up health food stores and had a family. My mother and father both started doing regional theatre in South Florida occasionally. My mom had a script open for something she was auditioning for, and I saw in the script there was a part for a 13-year-old heavyset girl, and I said, “I want to audition!” And my mother said, "You’re not heavyset, and you’ve never done anything before." [Laughs.] I was the shy kid with the book. So my nana, who had been a dressmaker, built me a padded dress, so I would look heavy, and I went to the audition and booked the job and my mom didn’t.… They were surprised to know that I wasn’t a little chubby kid, so they used my nana’s padded underclothes as part of my costume in the play. That was it, and then I just kept doing it. It was fun and rewarding.

Her parents are Dennis and Mona Jones, who were all over the South Florida theatre scene in the 70s and 80s.  In fact, in 1989 Rachel and Mona were both nominated for a Carbonell Award for Best Actress in a Musical.

So Now You Know
The Ramblings of a Techie brings us The Actors' Vocabulary; a tongue-in-cheek guide to the jargon unique to life on the stage.  And there's even an entry relevant to Dark days:


DARK NIGHT: a night before opening when no rehearsal is scheduled so the actors and crew can go home and get some well-deserved rest, and instead spend the night staring sleeplessly at the ceiling because they’re sure they needed one more rehearsal.

Meanwhile...
...in Palm Beach, The Royal Poinciana Playhouse is still closed.  The Palm Beach Daily news  reports that in addition to updating electrical and plumbing, the theatre will need replace - and reduce - its current seating.

The current owner of the building, Sterling Palm Beach, still says they are negotiating a lease with the National Arts Institute.  There's finally a familiar face on their website: Karen Poindexter, who produced shows for the Burt Reynolds Dinner Theater.