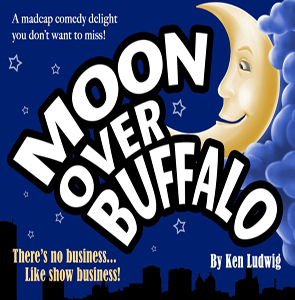 The Broward Stage Door Theater opened its production of Ken Ludwig's Moon Over Buffalo on August 30, 2013.

A farce by the author of Lend Me A Tenor about a warring couple of over-the-hill Broadway stars performing Private Lives and Cyrano de Bergerac in a small regional theater in a last bid to resurrect their careers.


The Moon over Buffalo cast is perfectly attuned to the requirements of this sometimes out-of-control play. Keeping the actors strapped to the stage is director Michael Leeds, who honed his skills on Broadway before coming south to Florida.

The program is a festival of fine acting, with Clement, a well-heeled thespian, leading the way... A skilled and savvy performer, he brings a charming, Jackie Gleason-like quality to the stage.

Foytek, in her debut at Broward, also runs the gamut from calm to crazy and brings great acting

Slotoroff truly shows her funny side... Andy Quiroga brings a pleasing demeanor to the stage...


Thanks to director Michael Leeds and his deft cast, Stage Door Theatre’s new production of Moon Over Buffalo ticks away expertly from start to finish.

Leeds and the actors, dressed in period (and theatrical) finery by costume designer Peter Lovello, load the production with all sorts of slapstick touches. Though physically he isn’t the dashing type, Clement masterfully delivers the humor, ego and honest regret that are George’s current lot in life. When a discouraged George leaps off the wagon, Clement plays the character’s increasingly drunken behavior as though he’s executing an intricately choreographed dance

His cast mates are quite good, particularly Edelman as the now-I-hear-you, now-I-don’t Ethel; Quiroga as the still-besotted Paul, and the droll Lawrence as the dull but well-heeled lawyer.


It’s not the five slamming doors nor the de rigueur Marx Brothers chases nor even the rapier repartee that make Broward Stage Door’s farce Moon Over Buffalo an enjoyable afternoon laughing at the foibles of vainglorious creatures who, of course, bear no relation to our own imperfections.

It’s the cast’s unflagging energy portraying an over-the-hill theatrical troupe, the extra topspin actors give a put-down, a half-beat of comic timing on a hoary line and scores of bits of business forgotten a moment later but which imbue the show with a sense of fine-grained craft.

...director Michael Leeds and a cast of clowns led by Ken Clement and Michelle Foytak apply combined decades of acquired skill to one of the more solid comedies that Stage Door has mounted in several seasons.

But inexplicably, this production underscores that door slamming farce just isn’t as inherently funny in the 21st Century as it used to be. Even revivals of Michael Frayn’s sublime Noises Off don’t land as solidly as they used to. Maybe the nature of comedy has changed, although I wouldn’t argue that with Aristophanes or Mel Brooks. Fortunately, Stage Door wisely has Leeds to helm this. The veteran comedy director knows how to stage a pratfall but also how to find the humor in the collision of characters.

Some people wonder if Clement has us on his payroll, given the laurels we’ve bedecked him with in recent years.  But once again, he displays acting chops that convincingly portray a range from cartoonish caricatures to recognizable woebegone schlubs. (The fact that he is perfectly capable of dramatic roles is just gravy). His George is volcanic, childish, manic, needy, resilient, weak – and under it all, sympathetic. That may be part of his secret: There’s a genial guy you’d want to take to dinner whether he’s playing a Russian clerk going mad or a forlorn theatrical booking agent or Santa Claus, which he’s slated to do in the upcoming national tour of Elf!

David Torres’ design for the green room is as a delightfully dilapidated as the troupe it houses, with faded mismatched furniture cadged from various productions, props from forgotten productions strewn around the premises and walls bearing posters from not so inestimable productions past.

Moon Over Buffalo isn’t comedy gold, but in the hands of Leeds, Clement and company, it’s approaching silver.