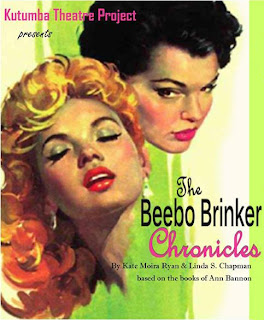 Kutumba Theatre Project opened its production of The Beebo Brinker Chronicles at the Galleria Studio Theater on September 6, 2013.

Set in pre-Stonewall Greenwich Village, The Beebo Brinker Chronicles celebrates the era when 'the love that dares not speak its name' began breaking the old rules...set in the 1950’s, fueled by booze and furtive sex, follows the lives and loves of Laura, Beth and Beebo as they navigate uncharted territories of desire.

Based on the novels by Ann Bannon
written by Kate Moira Ryan & Linda S. Chapman

That’s a shame, because most of the cast seems up to the job of having some sensationalized, soap-operatic fun with the script...

Director Kim Ehly does her best to draw out some sort of mob-versus-snob appeal, mashing up theatuh effects (such as period-perfect costumes and wry, witty pop songs bridging scenes together) with cheesy noir narration right out of Raymond Chandler. But the required melodrama to support it all just isn’t there in the writing.

Fridh and Groom (who totally nails two other roles) seem to vibrate in the same frequency as, say, a lush Douglas Sirk movie, which may have been the intent here, with the genre’s snappy dialogue, bitchy humor, hot breath, parted lips, heaving breasts and furtive gropes. When Fridh and Groom are the center of the action, the play seems to slip into sharp focus. When they are not, it’s harder to see not only where “Beebo Brinker” is going, but why.


This play is bawdy and salacious, full of suggestive language, sexual situations, even a little nudity – all for a cause that is both winningly witty and emotionally sensitive.

...Ehly and her cast are their best when they make the pulpy, half-century-old diction sound positively modern. As Beebo, Fridh is marvelous, a case study of invisible naturalism. Her Beebo is a creature of the forbidden night, one who only feels comfortable with a cigarette in one hand and a tumbler in the other, and Fridh has mastered her character’s lascivious glances and fearless swagger. Her acting chops are matched by Stabile – Fridh’s real-life husband, incidentally. Jack begins the play as a suave wag who sounds like he drifted in from a Fitzgerald novel, but Stabile eventually breaks down the caricature to reveal a surprising vulnerability and an infectious pathos.

Stock and Garranchan don’t far as well. The playwrights’ dialogue sounds especially arch when these two actors speak it, and their lack of chemistry together is a little too palpable – even when their characters’ relationship is supposed to be on the fritz.

Christina Groom is amusing and effectively gonzo in three parts, playing a lecherous pulp novelist and a plastered partygoer in addition to Marci; in each one, she leaves an indelible impression. And Powers is a compelling Laura, portraying her character’s coming of age like a naïve wallflower blooming into a fully realized bouquet.

The Kate Moira Ryan-Linda S. Chapman play... is the second show from Fort Lauderdale’s Kutumba Theatre Project, an LGBT-friendly company run by Kim Ehly. The script isn’t as strong as Ehly’s own Baby GirL, Kutumba’s memorable debut production. Yet in new digs at the Galleria Mall’s Galleria Studio Theatre... director Ehly and a strong cast mine Beebo Brinker for not only its noir-style humor but for the sobering, resonant truths about the characters’ search for happiness in a judgmental world.

Told in cinematically short scenes, the play powers through its weak spots thanks to Kutumba’s engaging cast. Powers makes the beautiful Laura a kind of everywoman’s fantasy, a dream dame who moves from loss, longing and a kind of naiveté to a sophisticated life of consensual adventure. As Beth, Stock isn’t nearly as compelling, though her scenes with Garranchan as Beth’s marriage implodes are effectively intense. Garranchan is playing a cliché of a man, a traditional hubby who can’t fathom why his sexually disinterested wife just can’t clean more and do a better job of bonding with their kids. Yet the actor finds dramatic depth in Charlie’s endless frustration, enriching each of his scenes.

Tyler K. Smith’s minimalist gray set design allows for multiple playing areas but doesn’t anchor the piece, and Sean Cutler’s too-stark lighting doesn’t always fit with the mood of a scene. Yet the costumes by Ehly and Melanie Garbo supply plenty of color and period-evocative style, and the sound design by Nicole Stodard and David Hart -- particularly the scene-bridging songs of the era --reinforces the play’s themes.

Whatever grooves the playwrights and Ehly were trying to create, only two of the six actors came close to convincingly inhabiting them: Fridh’s archetypical Beebo and Groom as a trio of characters including the not-too-bright roommate. Groom, as a dissolute party guest, nails the tone when she holds out an unlit cigarette and asks someone, “So, I have to find my own flint and rock?”

Otherwise, while the entire earnest cast was trying hard, most of the acting was more wooden than a Louisville slugger, baby, as Beebo would say. The leaden sledgehammer dialogue didn’t help.

Among the stronger aspects was the period costuming by Melanie Garbo and Ehly.  Also, the sound design by Nicole Stodard and David Hart enhanced the scenery changes with wry choices of pop hits from the ‘50s that commented on the action in the previous scene.

...what you get in Kutumba Theatre Project’s latest production is an ambitious staging of a play based on the lesbian oriented novels of the fifties when garish covers were de rigeur and snickers abounded.

As directed by Kim Ehly, ‘pulp’ and ‘noir’ are the constant themes throughout the Beebo Brinker Chronicles. Actors read the overly dramatic lines from the books as some of the many scenes are played out, with assistant director Nicole Stodard and sound designer David Hart providing the appropriate background music (ah, that sultry, lonely sax) that adds to the overall cartoonish effect. When this slightly over the top style works, it works beautifully.  Pulp indeed.  And much appreciated by the packed house.

And the actors?  Top of the list are Niki Fridh and Christina Groom.  Fridh as Beebo flaunts her masculinity but cannot hide her vulnerability, and Groom as Marcie/Lili/Nina delights with each carefully delineated character.  The less experienced Blaze Powers does well with the role of Laura, as she travels from innocent to jaded lover and Sandi M. Stock handles the difficult role of Beth, the girl who cannot make up her mind.  Matt Stabile as Jack, the ageing gay man who settles for convenience rather than love gets it right. The normally exuberant Rayner G. Garranchan has to pull back with the thankless role of Charlie, the argumentative straight man.

A deceptively simple monochrome set in gray by Tyler K. Smith offers bedrooms, night clubs, even a railroad station.  And a word here about the excellent vintage costuming by Melanie Garbo and Kim Ehly.  Well, three words, actually:  white pointed brassiere.  Nice attention to detail, as with all the apparel.

The Beebo Brinker Chronicles... will entertain more than just the LGBT audiences. It’s a worthwhile sophomore effort by Kim Ehly and her Kutumba Theatre Project...

Kutumba Theatre Project opened its production of The Beebo Brinker Chronicles at the Galleria Studio Theater this weekend, through October 6.
Posted by C.L.J.