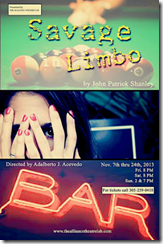 The Alliance Theatre Lab opened its production of  John Patrick Shanley’s Savage in Limbo at the Main Street Playhouse on November 7, 2013.

John Patrick Shanley (Doubt) sets his of-Broadway comedy-tragedy in a slightly seedy neighborhood bar in the Bronx, where a group of regulars (who all happen to be the same age—thirty-two) seek relief from the disappointments and tedium of the outside world. It explores the hopes and dreams of a group of rootless young “losers” who congregate in an anonymous Bronx bar, hoping to find respite from the drabness of their lives.

Stick five people in a bar, introduce conflict, keep them there for 90 minutes or so, and you have any number of plays. One of those is John Patrick Shanley’s Savage in Limbo, the quirky yet abundantly watchable 1984 dark comedy Alliance Theatre Lab has chosen to kick off its season at Main Street Playhouse in Miami Lakes.

Director Adalberto J. Acevedo, who also designed the set (Howard Ferré did the sound and lighting), gets intricately detailed, impressive performances from his young cast.

Vandepas has the toughest challenge, given the fact that Murk is about as ebullient as Clint Eastwood, but the actor shows the caring man within during a scene in which he tries to rescue April from her drunken despair. Zeller’s character is pretty much loaded, start to finish, but the actress artfully cuts through the alcoholic haze to reveal the hurts that propel her to that barstool night after night.

…as Denise, that Savage in limbo, Abergel is a tightly wound, funny wonder. Her performance drives the production, and it holds up alongside the best work in any early-vintage Shanley.

With crackling electricity and an earnest sincerity, the Alliance company conquers a script that is both lovely in its lyricism and risks wearing out its welcome by endlessly running full out in a hamster wheel getting nowhere (which may be the point). It’s a testament to the pyrotechnics and energy of the cast and the director that the audience willingly stays with it.

…the performances and direction are the best we’ve seen any of these folks deliver. Abergel, who has worked for several small theaters in the region, is a tireless bunch of nerve endings on a hunt compelled by a life-and-death hunger. She is matched stride for stride by Izarra… who just barely sidesteps the cartoon that Shanley has written, an accomplishment requiring considerable skill. Belz… has the same challenge and somehow triumphs over the Saturday Night Fever character that Shanley has written. Zeller, one of Alliance’s veterans, often sounds like a sitcom drunk and yet she manages to make credible April’s emergences from an alcoholic haze to vent her touching loneliness and pain. Vandepas, too, makes plausible Murk’s willingness to emerge from his shell when April is threatened. Each gets at least two solos to express their loneliness and their fear of the specter of a living death that faces them.

Acevedo’s physical staging is some of his best and his set design of a claustrophobic but homey haven is note perfect on a tiny budget…  this production, even with its flaws all laid at Shanley’s feet, is one of the most solid shows they’ve mounted.

The five actors Acevedo has directed are flawless. They handle the loneliness, the desperation, the stupidity, the humor with passion and truth. When voices are raised they're not just shouts and screams, they're voices from the heart.

This is not a piece that's all woe and damnation. There's tenderness seldom seen. It will be a long time before you forget the Christmas scene between April (she wanted to be a nun; she's a drunk) and Murk, the belligerent bar tender. Or Linda winning back Tony. Savage, of course, finds no one.

Founded in 2005 by Acevedo and a full season theatre since 2009, the Alliance Theatre Lab has consistently produced good theatre. Savage in Limbo is one of its best.

…while the play is always intellectually stimulating, it's also emotionally aloof. There's something missing in Savage in Limbo, something to viscerally connect audiences to Shanley's vision.

I'm convinced that this disconnection is present in the text and not in Alliance's superb production; this is quite simply one of the best-produced plays I've seen on its stage.  It's a bar-setting work (no pun intended) for ensemble acting in this region, perhaps the most cohesive team of actors assembled in a play since Zoetic Stage's All New People, back in January. Even the occasional mistakes and line flubs feel so real that they should be included in Shanley's script. As a result, the 90 minutes fly by.

The three women are especially outstanding. Izarra and Abergel are expert sparring partners, cut from similar cloths but clashing in texture. Both can speak a mile a minute, and both erect protective fronts and expose hidden vulnerabilities; the major difference is that Izarra's performance springs from the heart and Abergel's from the brain, choices that resonate deeply with their characters. Zeller's performance, meanwhile, springs from her Brandy Alexanders. She's a crushingly sad April, a permanently soused role that could easily have spiraled into parody. But she keeps it grounded, finding her character's illness and arresting us with just about every word.

The Alliance Theatre Lab presents Savage in Limbo at the Main Street Playhouse through November 24, 2013.