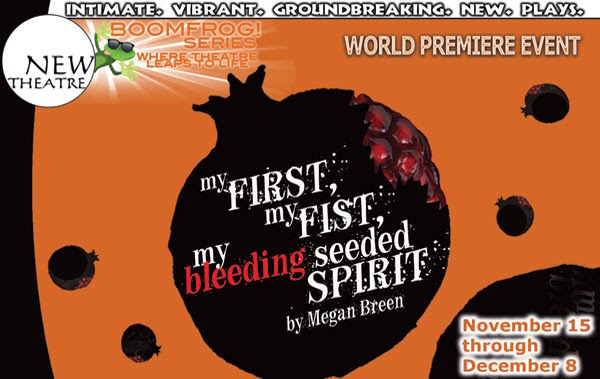 .. New Theatre opened its production of My First, My Fist, My Bleeding Seeded Spirit at Artistic Vibes, a last minute venue change necessitated by a water main break at The Roxy. But open it they did on November 15.


Federico Garcia Lorca's strident mother character, Bernarda Alba, has
been murdered in a New Mexican desert - Or has she been murdered? Hersurviving daughters writhe with opposing sentiments and gut wrenchingphysical reactions to her mysterious death. One must preserve tradition;one must release deep desires; one must attain vengeance; one must omither wrath altogether; but all must deal with their mother's imprint.


On Friday, a water-and-sewer leak at the Roxy Performing Arts Center where the company performs got New Theatre and the Roxy Theatre Group folks (who were winding up a run of Sweeney Todd) locked out of the building for the entire weekend. What to do?

What the audience saw was a stripped down version of director Martinez’s vision, performed on a raised platform in the middle of the Artistic Vibes black-box space. Amanda Sparhawk’s set, Samuel Deshauteurs’ lighting and most of K. Blair Brown’s costumes were locked away at the Roxy. Matt Corey’s original music and sound design were available via a laptop, but a glitch partway through the performance led to pre-recorded dialogue being read aloud, and other effects vanished. So the show, while extensively rehearsed in its original iteration, was rough-edged on opening night.

The physical theater aspects of the production are played out most powerfully by Quintana and Bonilla as Magdalena and Carlos metaphorically get it on. The dialogue seldom shows similar restraint, as Breen goes for the crude and lewd, letting her characters revel in their psychological unshackling from the force who kept them in line.

The humor supplied by Toledo and Benson brings welcome, albeit brief, respites from 100 intermission-free minutes of verbalized and physicalized lust, threats of violence, stomping, body-smacking and intermittent hysterical screeching. As restaged on the fly by Martinez, My First, My Fist, My Bleeding Seeded Spirit (an unwieldy title, to be sure) has sporadic moments of wit, clarity and dramatic power. But even with the bells and whistles of its intended production values, My First doesn’t begin to supply the thematic depth of the source material that inspired it.

Before we go another phrase, let’s give props to New Theatre for persevering to mount the world premiere of My First, My Fist, My Bleeding Seeded Spirit even though its sets, costumes, sound and lights are locked up in their normal home at the Roxy Performing Arts Center due to a burst water main. They had to relocate to the Artistic Vibes space miles away in about day or so to bravely carry on.

Then, let’s give them credit for courageously undertaking a kind of highly stylized, impressionistic experiment rarely attempted by South Florida theaters.

And then let’s acknowledge that for a lot of audience members, this one included, that My First comes across as an overheated, self-indulgent, ham-handed, pretentious misfire that has nothing to do with the physical challenges of the emergency transfer.

Hardly the only problem, but emblematic, is that during the first hour of the 105-minute play, there are three artistically stylistic modes: loud, really loud and deafening with a lot of floor-pounding on a hollow floor and ear-splitting screeching. I mean for a solid hour. From the opening moments.

There are even a few qualified virtues here including Martinez’s skill at staging the entire show as a kind of Martha Graham dance piece with vibrant movement, including a barely clothed but expressive representation of a young woman’s initiation into sex that looks like an X-rated edition of Cirque du Soleil acrobatics. That’s meant as a compliment.

It’s very difficult to evaluate Breen’s script because Martinez has directed the actors to deliver the lines with all the declamatory subtlety of a Greek chorus or a Hialeah construction crew swinging sledgehammers at each other. But she goes on way too long, having made her points over and over. Yet she has some incisively observed lines such as one daughter missing her mother’s presence, “Oh, I loved how she hated us...”

Unfortunately, when you can understand the words through the actresses’ inconsistent enunciation, many of them seem ludicrous. A sister aching for sex says, “My mouth is not thirsty,” then points to her vagina. “How do you drink down there?” Others make little sense such as, “My books will burn brightly in the mountains.”

Point is: There is more to great art (well, most great art) than venting a cry of the heart. There is skill and craft to forge that cry into some kind of disciplined communication that can be comprehended even on some visceral level. Witness the work of the House Theatre of Chicago imported to the Arsht Center or Mad Cat Theatre’s best offerings.

But other than Benson and Coleman’s work, the acting style is so far over the top that it is never engaging, compelling or moving.

Hopefully, New Theatre and My First will be back home at the Roxy soon where the play will be enhanced by lighting (Artistic Vibes could only provide four weak lighting elements), a system that can handle the doubtless sophisticated soundscape, the costumes, the sets etc.  But the problems that need to be addressed run far deeper.

New Theatre's production of My First, My Fist, My Bleeding Seeded Spirit plays at Artistic Vibes, through December 8; at least, as of this posting, they haven't announced plans to move the production back to the Roxy.
Posted by C.L.J.