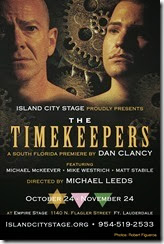 Island City Stage opened its production of The Timekeepers at Empire Stage on October 24, 2013:

…director Michael Leeds and stars Michael McKeever and Mike Westrich triumph by navigating quietly and gingerly through the halting lessons in human connection that Fort Lauderdale playwright Dan Clancy has sketched for them.

Not only is this the best production by far from the LGBT-centric company with a varied track record, it’s one of the best dramas seen in the region this year with no asterisks or qualifiers.

McKeever has played serious roles including a hoarding brother in his own play Stuff at the Caldwell Theatre Company. But his genial demeanor often gets him cast in light comic roles and audiences forget his range. This should change that for good. His Benjamin is someone whose emotions have been cauterized at the root of his humanity. It’s visible from his shuffling gait to his quavering voice to his eyes so studiously focused on his watches for fear of what he might see outside the workbench.

Westrich is quickly becoming a reason to go see a show simply because he’s in it... While his Hans is unapologetically gay, he reins it in just short of a caricature. His flamboyance seems designed primarily to vex Benjamin. Westrich creates a three-dimensional human being who can barely conceal his fear but who is the braver of the two since he has yet to surrender his sense of humor or desire to make a human connection.

The production values are atypically impressive for this tiny venue. Michael McClain’s setting is note perfect: a claustrophobic barracks the size of a dog run, backed by weather-worn slats with gaps large enough to let Preston Bircher’s lighting shine through.

Under Michael Leeds’ sensitive, artfully detailed direction, McKeever and Westrich bring the two men -- so different, yet in the same dire situation -- to life. Each gives taunting, dehumanizing voice to the prejudices that landed the other in the camp. Both prove adept at bargaining for and swapping information.

All three actors deliver compelling, effective performances: McKeever as an agonized family man, Westrich as cagey gay survivor and Stabile as the casually cruel, relentlessly bullying guard. Just as impressively, Island City Stage’s design team delivers some of the best work ever done in the intimate confines of the performance space at Empire Stage.

Michael McClain’s set encages the men in a small rectangle of wood and barbed wire, and Preston Bircher’s lighting suggests scorching summer and the unbearable cold of winter seeping through the slats of the makeshift walls. David Hart’s fine sound design supplies the menace outside those walls and the quick ticking of the watches, that rapid heartbeat marking the minutes, hours and days spent in a limbo between death and salvation

…as Clancy reveals more and more about two men brought together by terrible fate and unimaginable inhumanity, The Timekeepers becomes a riveting window into one of history’s most shameful chapters.

Clancy fills his script with (perhaps one too many) double-entendres about time, and it suffices to say that Westrich's Hans is like the second hand, always in motion, his fear couched in perpetual chatter, while McKeever's Benjamin is a minute hand — slow and measured in his movements, short on speech. McKeever is known for playing fast-talking, cosmopolitan characters, but he emerges far out of his pigeonhole for this one. Director Michael Leeds subversively taps McKeever's potential for nebbishy, bookish restraint. The same anti-typecasting can be said for Matt Stabile, whose suave onstage persona in shows like Shorts Gone Wild and The Beebo Brinker Chronicles is markedly absent from his expertly played role as a sadistic SS officer.

The experience of sitting through The Timekeepers' unbroken 100 minutes can feel uncomfortable, which in this case is probably a compliment. Michael McClain's set design, a claustrophobic wooden coop enclosed by barbed wire, is appropriately stifling.

David Hart's sound design offers occasional aural glimpses of the outside world — barking guard dogs, Teutonic marches, whining warplanes. But his most potent contribution is the tick... tick... tick... of the timepieces.

Kathryn Ryan wrote for The Edge:

"Timekeepers" by Dan Clancy is a beautifully crafted play that runs like a Swiss timepiece.

This is not a story so much about homophobia or anti-Semitism as much as it is a story about the difficulty we all have in opening ourselves up to another and revealing both the noble as well as revolting sides of our natures.

The characterizations are all painfully real from the guilt-ridden, Jewish watchmaker, whose hubris prevented him from leaving Germany with his family when he had the chance, to the gay hustler, who has been betrayed by his lover’s family, to the common criminal, whose proclivities run from the carnal to the cruel.

The acting, directing and technical aspects of the production all serve to tell this tragic, yet tender story. Director Leeds is at the top of his game here from assembling the perfect cast to pacing the piece so that we can appreciate every nuanced performance.

Under Leeds direction, Michael McKeever’s heart-rending description of his daughter in her coffin wearing her favorite dress… is so simply wrought the actor convinces the audience of his love for family. McKeever’s Ben is never overly sentimental.

Mike Westrich as Hans nails a performance that could easily have bordered on stereotype in less skilled hands. His Hans is fey without ever adopting over-the-top mannerisms.

…Matt Stabile is nothing short of frightening. He is a soft voice with a hard boot. In many ways he has the most difficult task trying to humanize this brute. Yet, he does.

The Sun-Sentinel, lacking a proper theatre critique, once slaps the theatre community in the face by publishing the awful dreck Rod Hagwood passes off as astute criticism:

8:10 p.m.: We watch, through strands of barbed wire, Jewish concentration camp prisoner 1793 (Michael McKeever, who is doing a mind-meld with his character) do the meticulous work of fixing wristwatches the Nazis have taken from inmates.

That’s right, shit-for-brains Hagwood has appended a time to each paragraph of his “review”. Because the play is about “Time”. Get it?  It’s like wit, or something.

8:14 to 9:45 p.m.: The story unfolds with no intermission and with the carefully calibrated pace from the engrossing, metronomelike direction of Michael Leeds.

The Island City Stage Production of The Timekeepers plays at Empire Stage through November 24, 2013.