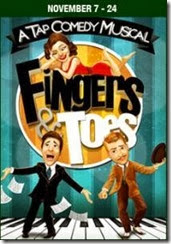 The Plaza Theatre opened its production of Fingers & Toes on November 7, 2013.

It’s a love triangle that keeps you guessing all while snapping your fingers and tapping your toes! Tap dancer Dustin “Toes” MacGrath and pianist Tristan “Fingers” St. Claire have dreams of putting on a major Broadway show. They sell the idea to a producer with a grand tale of a show stopping boy meets girl dance spectacular that’ll be finished in two weeks. Unfortunately, they haven’t written it yet,…

There are bits and pieces to love in what Plaza Theatre is billing as a tap comedy musical, Fingers and Toes.  This throwback draws its breath from musical theater naiveté and recalls a time when talent was about the love of tap dancing and the hard-knock life of the Great White Way when the competition wasn’t impersonating Glee kids or Who’s Got Talent? wannabes.

Much of the script is clichéd and hackneyed and, more than once, the same device that gets a laugh in one scene is repeated to obtain the same result again and again. Mostly they are time-travel yuks about musicals that have yet to appear in the American songbook. “We could set a show in Oklahoma, says Toes to which Fingers replies: “That would be the worst musical ever…you might as well set is on a tropical island.”

Medland’s original score isn’t catchy enough and it probably would fare better if audiences could sing along with a musical revue of songs they knew instead of “sound-alikes.”

A bigger problem still is this: There just aren’t enough Toes in Fingers and Toes. The stage and performers light up during some intricately choreographed tap numbers. And talented terpsichorean Faugno mesmerizes each time he glides across the stage. But things slow down to a lull when dialogue interrupts to spell out the boy-meets-girl, another boy meets the same girl, and boy-loses-girl story.

Bassman as Molloy keeps up with Faugno in the dance department (almost – he’s just that good!), but they both seem to be struggling to bring life to the limp script. Berk hammers away at Fingers’ sad-sack story, but he can’t overtake the limited dimension the character is given.

Robert Moss’s direction uses the one-setting space well and he has an understanding of what’s needed to keep the tuner merrily rolling along, whereas in different hands it could easily become uneven (the divide between the book and the music creates this disparity).

David Wanstreet’s choreography is the life of the show and is the reason to see this musical. He’s created beautiful silhouettes, twists, turns and sensual nuances. An a capella tap number that finds Toes playing out his moods dramatically on a short staircase is magically designed by Wanstreet and orchestrated so masterfully by Faugno, it becomes a piece of tap art.

The Sun-Sentinel continues its practice of denigrating live theatre by sending its fashion editor to cover it for the paper’s gay blog.  You don’t have to be gay to enjoy theater.  Honestly.  Theatre reviews belong in the Arts section directly, and it’s stupid decisions like this that drive readers away.

The production at the Plaza Theatre in Manalapan seems more expansive than its one location and three-member cast. But mega-massive talent has a way of doing that, and this performing triumvirate has some serious gifts.

…showbizzy joking goes on in the production. Toes loses a job to some new kid named Gene Kelly. Themes for their musical — like something centered in “Oklahoma” or maybe in “South Pacific” — are thrown out for being unworkable. “Annie Get Your Gun” and “Singin’ in the Rain” are punch lines.

Of course, the songs are nowhere near as memorable as any of the ones in those iconic musicals, and “Fingers & Toes” has to float somewhere between campy and reverent. So what? In the balance, the cast erases the script’s deficiencies with well-versed stagecraft. Faugno’s tap dancing is nothing short of a revelation, and Berk reminds us that the piano is also a percussive instrument.