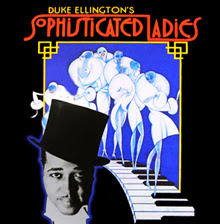 The Stage Door Theatre opened its production of Sophisticated Ladies at its Broward venue on October 25, 2013.

The musical legacy of The Duke is celebrated in this stylish and brassy retrospective that has taken audiences and critics alike by storm throughout the world. Featuring "It Don't Mean a Thang", "Take the A Train", and "Satin Doll" to name a few. This is a great evening of theatrical entertainment from one of the great masters!

At Stage Door, under the direction of Dan Kelley and with elaborate choreography by Chrissi Ardito, Sophisticated Ladies becomes a by-the-numbers song and dance show. Some of those numbers -- particularly those featuring the expert jazz vocals of Ziarra Washington -- are exquisite invitations to get lost in Ellington’s world. Others feel like filler, as one singer goes ever-so-slightly flat and another struggles with a melody that doesn’t lie comfortably in his range.

The lack of live musicians is a bit ironic, given Ellington’s history as a pianist and orchestra leader, and it makes the number-to-number transitions that much more difficult. Sophisticated Ladies is all start, stop, start, stop, with little flow.

The performers, dressed in a constantly changing array of colorful costumes by Peter Lovello, bring plenty of vocal and dance talent to the piece, leading to a number of memorable moments.

The standout singer, though not the only impressive one, is Washington. Slender, self-assured and adept at revelatory phrasing, she scats opposite the appealing Christopher George Patterson on Take the ‘A’ Train, delivers an aching In a Sentimental Mood, turns a duet with Stevanie Anita Williams (a blending of I Got It Bad and That Ain’t Good and Mood Indigo) into one of the show’s highlights.

Led by lanky Gregory Omar Osborne, dancers Clint J. Hromsco, Marcus Davis, Walter P. Kemp II, Courtney Blackmun, Karma Jenkins and Shenise Nuñez turn Caravan into a demonstration of precision tapping. Brooke Martino brings vocal exuberance and high kicks to Hit Me With a Hot Note and Watch Me Bounce, and Patterson shines opposite Washington in the counterpoint number Don’t Get Around Much Anymore/I Let a Song Go Out of My Heart.

Sophisticated Ladies will seem a perfectly pleasant way to spend an afternoon at the theater. But musicians and smoother transitions would make for a better show.

Sophisticated Ladies, a 32-year-old revue of the tunes, dress and dance steps most associated with Edward Kennedy “Duke” Ellington, is the latest offering at Broward Stage Door Theatre, and it brings us back to the lively jazz-and-jive scene of the Cotton Club era in hugely entertaining fashion.

...Dan Kelley does double duty as director and musical-staging artist. He uses velvet gloves to make sure the action is smooth, and his 11 performers respond with elegance.

One minor setback: The music is a pre-recorded track that has a tendency to sound tinny, though sometimes the actors overcome the flaw with terrific stage presence. A live orchestra, or maybe a smaller ensemble – one heavy on saxophone, clarinet and banjo – would have brought the show closer to perfection.

Adding touches of humor with elegance are the guys, including familiar Broward Stage performer Marcus Davis, the returning Clint Hromsco, an excellent Walter Kemp II – a singer and a choreographer – Gregory Omar Osborne and Christopher George Patterson, who, whenever onstage, looks so darn happy to be there. Everyone seems equally adept at delivering the goods.

The well-disciplined troupe dazzles the audience all along the way..

Costumer Peter Lovello deserves extra credit for designing the colorful wardrobes that change from song to song. Plaudits also are in order for tailor Carman Guzman, whose fingers must have been flying to produce garb that stuns with the flash of a bygone era.

Choreographer Chrissi Ardito conjures up some magical steps, as the tap dancing is top-notch, and the high kicks, swirls, spins and other moves are certain crowd-pleasers.

Rod Stafford Hagwood Your Gay Boyfriend was there for the Stunned-Senseless:

“Sophisticated Ladies,” the celebration of composer Duke Ellington’s music now at the Stage Door Theatre in Coral Springs, sounds as good as it looks.

And that is really saying something about the music, because thanks to Peter Lovello’s sparkly, spangly, shiny costumes and David Torres’ set right out of an Erte dream for Busby Berkeley, this show looks like a million bucks, which adjusted for inflation is more like a gazillion.

Ha Ha.  "Adjusted for inflation."  That's like humor, or something.

The show’s dream team of a cast includes 11 singers-slash-dancers, who belt out 24 numbers with husky razzle-dazzle. And what hits they have to work with...

Note to S-S editor: when you are writing it out, you don't have to WRITE the word "slash"; you just put in the "-".

So the show is performed with a recorded track, albeit an excellent one. Insert long sigh here. Ellington’s music keeps getting interrupted with brief dead spots between songs as the next track comes online. The cast has to work awfully hard, harder than we have the right to expect really, to keep revving the engine back up.