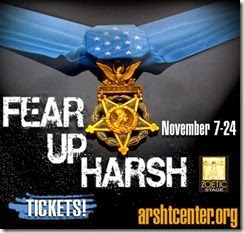 Zoetic Stage opened its world premiere of Christopher Demos-Brown’s Fear Up Harsh at the Adrienne Arsht Center for the Performing arts on November 7, 2013.

"Fear Up Harsh" is a term used by the military to designate "enhanced interrogation" techniques. It's also the title of a searing new drama about a marine Medal of Honor Winner hiding a past that's anything but honorable, by Zoetic Stage co-founder and 2010 Carbonell Award winner, Christopher Demos-Brown.

An Iraq War Medal of Honor recipient's perfect life begins to unravel when a former comrade-in-arms comes to call in this play that shines a light on the corrupting effects of awards and commendations.

Glory and shame, truth and secrets, the ongoing price of valor: Miami playwright Christopher Demos-Brown explores those notions and more in Fear Up Harsh, an engrossing new play now getting its Zoetic Stage world premiere at the Adrienne Arsht Center for the Performing Arts.
Incisive, amusing, sardonic and finally deeply affecting, the play underscores strengths Demos-Brown demonstrated in his earlier Carbonell Award-winning When the Sun Shone Brighter and the tart comedy Captiva. This is a playwright who crafts smart, insightful dialogue and memorable characters in service of compelling, engagingly theatrical stories.

Zoetic artistic director Stuart Meltzer keeps the production’s in-the-moment storytelling simple and clear, so there’s no confusion as a good man’s myth begins to unravel.
Brechtian make-believe, in which the audience becomes complicit, is always in evidence on Jodi Dellaventura’s malleable set, a rubble-surrounded platform that becomes Rob’s home, the battlefield, military and other offices.

In bringing the play to life for the first time, each actor communicates the complexities and contradictions of Demos-Brown’s richly written characters. Tanner, a real-life Army veteran, brings a military bearing, discipline and self-control to Rob, yet he lets Rob’s softening love for his daughter fleetingly transform his face. Sanford is persuasive as a girl whose desire to please her dad trumps a scarcely explored rebellious streak. Anthony is funny, foul and always effective as a variety of military men, a cop and a bullying Pentagon aide.
Stephens, who basks in loud cheers during the curtain call (and deserves every one), is superb as the fierce, broken Mary. Demos-Brown crafted the role for her, and one of the region’s best actors makes every quip, every comeback, every moment of confessional heartbreak her own.

While paying all due respect to those who serve our country, Christopher Demos-Brown’s Fear Up Harsh is a mercilessly penetrating interrogation of how our need for heroes — a need even among the heroes themselves – can trump the very values of truth, honor and loyalty that they fought to preserve

The universally terrific cast directed by Stuart Meltzer features a world-class performance, no exaggeration, by Karen Stephens who invests truth and life into the familiar trope of a physically and mentally scarred veteran who can no longer find home back home.

Stephens delivers Mary Jean’s curse of knowing the truth and being unable to escape its permanent blowback. She also creates the tragic division between the world of warfare and the world back home, a disconnect so massive that the sometimes facile sentiment “Thank you for your service” cannot bridge it.

Tanner, often erroneously pigeonholed as a musical theater actor, nails the difficult task of melding Wellman’s ambivalence, pride, love for his daughter, fear, guilt and half-dozen other warring qualities. Tanner and Demos-Brown make it clear that Wellman is, indeed, literally in deed, a hero, but also an imperfect human being.

Newcomer Sanford, a recent New World grad, is fine as the teenager who adores her father and shares many of his traditional values, but who harbors a secret desire to be a punk rock musician.

Anthony plays a half dozen military types up and down the command chain, making each one different from the other and yet obviously all cut from the same cloth of bureaucracy.

Christopher Demos-Brown's world premiere, Fear Up Harsh, playing now at the Arsht Center, knocks the props from under the concept of honor. It's a brutal, cynical story of inter-service rivalry, the weakness of heroes and the trauma of war. The acting is terrific, the story is explosive, the dialogue of the very best, yet Zoetic Stage's presentation is unfortunately flawed. Blame the director, blame the writer.

The playing area is surprisingly small; a three quarter thrust raised stage representing Iraq, Wellman's home, various Marine and Army offices, with steps leading up on both sides from the theatre floor. Some of the action, however, is on the floor and almost impossible to see. The at times problematic blocking leaves actors facing upstage with consequent loss of dialogue.

This is a play of flash backs and it is within these that Stephen G. Anthony produces an outstanding, seemingly endless, stream of characters. He's a President, a Pentagon PR flack, a captain, a colonel, a general, a surgeon, an enlisted man and a townie cop. Perhaps more. Each character completely his own entity. Impressive.

I was fortunate enough to see the original reading of the play at the Arsht some months ago and it was enthralling. Christopher Demos-Brown presented a first script that was exceptional in its power and crispness. Obviously there were many rewrites between then and opening night and just as obviously they were not all to the good, the prime example being the enlargement of the part of Shawn, Wellman's daughter. She is not a driving character in the piece, the story plays out with or without her and it seems at times we are watching two completely different tales, the one sucking the power from the other.

With all that being said, this is still a piece that should be seen; its worth outshines its faults.

Zoetic Stage presents Fear Up Harsh at the Arsht Center through November 24, 2013.