Because I missed the July 4th Scene, I didn't get the reviews up for Florida Stage's current production, Dream A Little Dream: The Nearly True Story of The Mamas and The Papas. So in the interests of fair play (and the fact that Steve Anthony plays poker with me every week), I'm putting them up now. 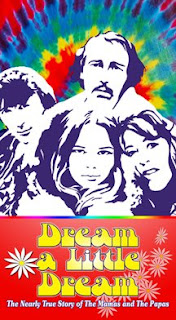 The show is a "Juke Box Musical," a show that is built around the song catalogue of a popular music group. Sometimes these shows work extremely well (Mamma Mia! and Jersey Boys) and other times they...don't (Good Vibrations). Good songs don't necessarily mean there's a good story, and musical theater is at least a sum of the parts.

Dream a Little Dream - as written by Denny Doherty - was produced a few years ago to mixed reviews. The version playing at Florida Stage has been revised, the material extensively re-worked by Paul Ledoux, a friend of Doherty's.

First up is Hap Erstein at the Palm Beach Post, who recommends the show:

"What is onstage now is a dramatic improvement over what played New York, but its best moments are the vocal covers of the quartet's song hits."

"Like the show itself, the four Mamas and Papas are better when they are singing than acting, or maybe it is just that much of the script is so sketchy and stilted that it is not actable. Still, the resemblances of Alisa Schiff (Cass), Kyle Harris (Denny), Christine Hope (Michelle) and Michael Sample (John) to their real-life characters is uncanny and when they lift their voices in song, all is right with the show."

"Dream a Little Dream at the Florida Stage is a textbook example of a show whose strongest elements triumph over its flaws to produce a rousing evening."

....the ever-dependable Stephen G. Anthony triumphs over the script as the older Doherty, a narrator whose geniality is drenched in regrets.

Special applause is due Connie Furr-Soloman's huge procession of period-perfect costumes that we want to forget we wore: flowered muumuus, white go-go boots, paisley shirts and double-breasted suits in colors and textures not found in nature."

It took me awhile to find Christine Dolen's review in the Herald: the greedy bastards tucked it into the Archives already. But someone with foresight published it to Individual.Com.

"Something groovy is filling Florida Stage's summer musical slot this year, and everybody who remembers the '60s (or wishes they hadn't missed things like the Summer of Love) needs to say "to hell with gas prices" and take a road trip up to Manalapan."

So there you have it, the major reviews for Dream a Little Dream. It runs through August 31 at Florida Stage, located in Manalapan.

If I've missed any other shows and their reviews, let me know, and I'll link up all the reviews.