It's hard to believe that it's already August! Summer seems to be flying by, but it's not over yet. But that's OK, the Theatre Scene continues to sizzle in a far more pleasant manner.
Slow summer? DOUBT that!

Caldwell Theatre re-mounts its critically acclaimed production of DOUBT. According to their website, everyone that made the show a success has returned:

"Returning with the cast that made magic in its South Florida Premiere at Caldwell, Doubt features Pat Nesbit as Sister Aloysius, Terry Hardcastle as Father Flynn, Pat Bowie (2007 Best Supporting Actress in a Play Carbonell Award-Nominee for Doubt) as Mrs. Muller and Amy Montminy as Sister James"

But it's a limited engagement: you've only got until August 17th.

For some theaters, the summer is a little bit longer that it was:

As previously noted, Sol Theatre Project has extended its run of Why We Have A Body to August 9th. It may be too racy for the...more...seasoned...theatre patron, but if you want to see something challenging, two out of three theater critics recommend it.
Actors' Playhouse at the Miracle Theater has also extended the run of its production of MIDLIFE: The Crisis Musical. It's held over until August 24th. But don't count on further extensions; I understand that one of the cast members may have a prior commitment. So if you haven't seen it yet, don't wait too much longer.

It's not for nothing at the Stage Door Theatre: ZERO HOUR has been held over through August 10th, according to the Sun-Sentinel. (Psst - Dave Torres, you should get your website updated!) 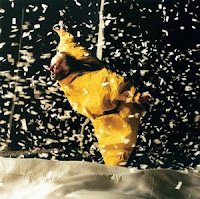 The Endless Summer hasn't melted Slava's Snowshow at the Arsht Center, either. According to Christine Dolen's review in the Herald,

"...it's already a hit with Miami audiences who have been flocking to the show and snapping up tickets since it began ... Ticket sales are so strong, in fact, that the show's run has been extended through Aug. 31."

"For some, Slava's Snowshow will be joyous fun and nothing more; for others, the experience will burrow deeper and turn poignant."

This is another show that friends are raving about. It's been described as a combination of Cique de Soleil and Blue Man Group.

A show that hasn't been extended: FREE TO BE...YOU AND ME, a musical for kids, closes on Saturday. If you think the title is familiar, this is a live show based on the TV special from the 70s produced by Marlo Thomas. It's a 2pm curtain on Saturday at Actors' Playhouse at the Miracle Theatre.
Summertime DREAM

DREAM A LITTLE DREAM: THE NEARLY TRUE STORY OF THE MAMAS AND THE PAPAS continues its run at Florida Stage in Manalapan. Here's a tip for you: go a little early, and walk across A1A to the Lantana Beach. Have dinner at the Dune Deck Cafe, nestled in the dunes looking over the beach. It's a good meal, but don't expect a five-star restaurant - you're there for the view and the ocean breeze. Get a little sand between your toes before you wander back to the theater to see the show.
A Summer Fantasia

SOUVENIR - a Fantasia on the Life of Florence Foster Jenkins, continues to run at Palm Beach DramaWorks. A friend came in this morning RAVING about this show. And who can blame her? It stars the amazingly versatile Elizabeth Dimon, and she's supported by Tom Kenaston.
Seriously, everyone loves this show. Don't miss.

HAIR at the Lake Worth Playhouse.

Girls Night: The Musical moves from the Kravis Center in West Palm Beach to the Parker Playhouse in Fort Lauderdale.

Now I'm off to watch Ken Clement on BURN NOTICE. And keep following the progress of RED TIDE at the Minnesota Fringe Festival right here on the South Florida Theatre Scene!
Posted by C.L.J.