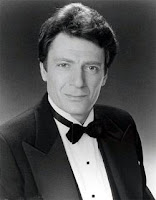 The office was abuzz with it when I walked in this morning; Bruce Adler has passed.
The news of his fight with cancer only came out yesterday in Christine Dolen's blog; her story about Bruce in hospice care has already been amended. I'm not going to attempt to repeat her work; go read it.
Bruce leaves behind his wife, director Amy London, and a son, Jacob Hayden. Adler has only been a father for a year.

I join Christine in asking everyone to send good thoughts to Amy, Jacob, and the rest of Bruce Adler's family and friends.

This letter was sent to the patrons of The New Vista Theatre Company, where Bruce recently appeared in I'm Not Rappapport!, and was slated to star in THE PRODUCERS:

Bruce died peacefully this morning, Friday, July 25, 2008 after losing
his battle with cancer.

Bruce will be fondly remembered and honored by us all for playing such
an important part in the birth of The New Vista Theatre Company with his
leading roles in The Sunshine Boys and I'm Not Rappaport.

We extend our most sincere condolences to his family, his wife, Amy,
their son Jake, Emily and A.J.

A memorial tribute to honor Bruce's life is being planned.

Other links:
Playbill
Posted by C.L.J.