Another South Floridian winds up In the Heights 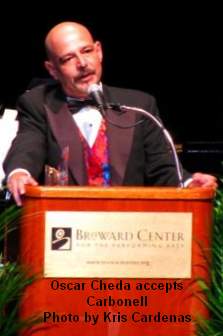 Veteran South Florida actor Oscar Cheda has just learned that he will be going out with the National Tour of In the Heights.

Cheda, who recently won the Carbonell Award for Best Actor in a Musical for his work in GableStage's Adding Machine, will be the "swing*" for Kevin (the dad) and the Piragua guy.

To say he's excited would be an understatement:

"Oh my god! It's finally sinking in that I'll be gone for a year!"

The tour kicks off in Tampa on October 26, 2009, but you won't have to drive that far to see it: it comes the Broward Center for the Performing Arts on March 16 for a three week run.