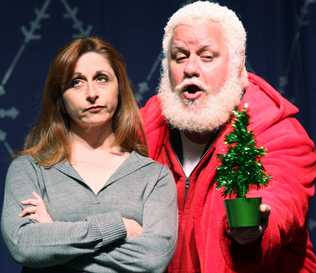 Actors' Playhouse at the Miracle Theater opened its production of Another Night Before Christmas on December 4, 2009.

Karol Elloit, a dispirited social worker, is destined to celebrate another lonely Christmas in her city apartment. On her way home on Christmas Eve, she encounters a homeless man with whom she shares some groceries. Later that night, an intruder, the homeless man she’d met earlier, breaks in claiming to be “someone special in her life”. A “take” on the poem from which it derives its name, this contemporary and timeless look at the dilemmas and joys of the holidays will warm your heart and restore your faith in holiday magic.

David Arisco directed a cast that featured Irene Adjan and Ken Clement, with musical direction and accompaniment by David Nagy.

Irene Adjan and Ken Clement are such skilled and affable actors that they could entertain you by singing the contents of the Art Basel catalog.

The script, David Arisco's direction and the two actors inject just enough sass and cynicism to keep this from being a ``very special'' Lifetime movie of the week.

The saving graces are the two actors, staunch professionals despite the dearth of material to work with. Adjan is such a winning gamin that you always root for her inevitable reclamation, even playing a Grinchy grouch with a damaged heart.

Clement, who is incapable of a pedestrian performance, gifts the audience with a Santa sackful of panache, verve and (with Arisco's help) comedic tricks that make you want to take him home with you.

...Grennan’s book so succinctly relays the story, that the music by Okimoto often appears superfluous, and fails to add any particularly meaningful flavor.

Still, Carbonell Award winning director David Arisco utilizes a magnificent set and light design by Gene Seyffer and Patrick Tennent, respectively, to offer a holiday tale that is sure to brighten the spirits of anyone willing to push the boundaries of belief.

The theme for most holiday shows, whether on stage or in the movies (such as A Christmas Carol or Miracle on 34th Street ), is “redemption.” But, the most redeeming quality of the musical Another Night Before Christmas – currently ringing in the festive season at Actors’ Playhouse... is the acting and vocalizing of its two stars – Irene Adjan and Ken Clement.

Adjan’s vocal range seems to reverberate throughout the town. She charms as a disillusioned social worker, waiting to get the spirit of Christmas back in her life, and Clement is a comic hurricane, thundering through another story about Santa coming to the rescue.

Directed by David Arisco, who usually provides South Floridians with giant casts, amazing scenic effects and lavish production numbers, Another Night Before Christmas seems to be tied to the economic mess of 2009 – just two actors, yet a surprisingly innovative set by Gene Seyfer, a single piano providing the music (as always well done by Musical Chief David Nagy) and a ho-ho-hum of a story by Sean Grennan and Leah Okimoto, the talented creators of Married ALIVE!

Another Night Before Christmas plays at Actors' Playhouse through December 27.
Posted by C.L.J.