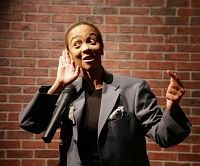 Karen Stephens, the ageless actress who as appeared on South Florida stages from Jupiter to Coral Gables, has headed a bit further north for her current project. She's opening Sarah Jones' Bridge and Tunnel at Florida Studio Theatre in Sarasota, Florida.

From the Sarasota Herald-Tribune:

Stephens said that once she prepared an audition tape for the theater, "I started to want to be hired. I lost my fear and I got excited about the possibility of doing this. It's been challenging mining those areas of myself that have been heretofore unmined as far as culture and dialect. I mean, I will never get to play a Russian man in normal theater work."