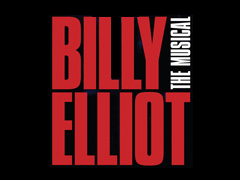 The national tour of Billy Elliot the Musical opened at the Broward Center for the Performing Arts on February 29, 2012.


BILLY ELLIOT THE MUSICAL is the joyous celebration of one boy's journey to make his dreams come true. Set in a small town, the story follows Billy as he stumbles out of the boxing ring and into a ballet class, discovering a surprising passion that inspires his family and his whole community. A big musical with an even bigger heart, BILLY ELLIOT will enchant the dreamer in all of us.


With its flights of imagination – literally, since the hero imagines himself soaring  – Billy Elliot, The Musical is a triumph of theatrical staging. If this road tour at the Broward Center for the Performing Arts is not overwhelmingly moving, it remains one of the most thoroughly entertaining musicals to pass through here in some time.

Indeed, imagination is the keystone of both Lee Hall’s script and director Stephen Daldry’s creative team. Over and over, the audience is treated, a good choice of word, to what the world looks like from the inside of young boy’s head.

The winner of a slew of well-deserved Tony Awards in 2009, Billy Elliot is blessed with a long list of virtues including Elton John’s music (so superior to Aida that it seems to have been written by someone else), Daldry’s talent for visual imagery abetted by lighting designer Rick Fisher, and above all, the breathtakingly inventive choreography of Peter Darling who designed completely credible dances for miners, police officers, parents and children as seen through the prism of Billy’s imagination.

The sole quibble is that while Billy Elliot has some moving moments, notably the father’s sacrifice of his principles for the love of his son, you’d expect the entire evening to be a far more emotional experience. All the elements are here and doubtless some audience members will be affected. But that transporting magic that obliterates the fourth wall seems to be missing.

The Billy we saw (one of four) was Ty Forhan, who has a sort of a frail Macauley Culkin/Anne Heche look to him. His dancing, it goes without saying, is unassailably fine, although not as crisp as you might expect in the frenzied explosion of a solo that closes the first act when Billy’s dream is squashed by his family.

Where Forhan really shines is as an actor. You can feel how his mother’s premature death has blunted his spirit. As Billy is drawn deeper into dancing, Forhan’s face exudes a dogged determination while exposing his puzzlement at the emergence of this particular outlet and skepticism that he can achieve his goal.

Understudy Sasha Ely-Judkins, who stepped in as the teacher, was a standout armed with a brassy trumpet of a singing voice...

But there was not a weak link in the group; no one is coasting. Rich Hebert is the salt of the earth father struggling with the loss of his wife and the slow destruction of his way of life. Cullen R. Titmas is the fiery older son favoring violence to win the strike. Cynthia Darlow has a wry turn as a doddering grandmother remembering how dancing helped her cope with an abusive husband. Jacob Zelonky stopped the show as Billy’s best friend already exploring his sexuality. His joyous tap dancing duet with Billy is a highlight of the evening.


In the same way that the musical Annie developed an army of mop-topped little girls able to belt Tomorrow to the last row of the balcony, the stage version of Billy Elliot has generated a passel of pre-teen boys, all expert at ballet, tap, hip-hop and character dance.

And if they are as energetic and talented as J.P. Viernes... who opened in the title role to kick off a two-week run at Fort Lauderdale’s Broward Center, the show should be amazing and entertaining audiences for a long time to come.

...the clash between the miners and riot police, as well as the contrast between the picket lines and the line of pirouetting kids proves to be fertile territory for choreographer Peter Darling.

Still running in London after seven years... Billy opened on Broadway in 2008, copping 10 Tony Awards. The road version cuts a few corners with Ian MacNeil’s scenic design, but otherwise the musical -- and its considerable emotional wallop -- are delivered very much intact.

(Elton) John comes up with his best theater score yet, full of strident anthems for the miners, an infectious political nose-thumber (Merry Christmas, Maggie Thatcher), a guaranteed lump-in-the-throat musical letter from Billy’s dead mum and a rousing it’s-OK-to-be-different duet (Expressing Yourself) between Billy and his younger, smaller, gay sidekick (Cameron Clifford, a born scene-stealer).

There is plenty to like about this show, which mixes sentiment with politics expertly. But ultimately, Billy Elliot works because of the performer playing Billy. As with all productions, the role is played by a rotating trio of young men. There is no reason to think the other two are not just as talented, but Viernes is an amazing little dynamo and Billy Elliot is the first great new musical of the millennium.


Winner of London’s Olivier Award and Broadway’s Tony, Billy Elliot the Musical has finally arrived in South Florida for a two-week run at the Broward Center for the Performing Arts with four talented actor-dancers taking turns in the title role. That sharing of the star part is no gimmick: Playing Billy requires almost three hours of stage time, and choreographer Peter Darling’s showcase dances for Billy demand stamina, polished technique and inspired artistry. J.P. Viernes, who got Wednesday’s opening night gig as Billy, certainly brings all of those qualities to his fierce, moving dancing.

The show’s score, with music by Elton John and lyrics by Hall, is rousingly, beautifully played by an orchestra of touring and local musicians. In his most mature theater score, the famous composer evokes different traditional British musical styles while still delivering the catchy numbers (Shine, Solidarity) that have made him such an enduring pop star.

Two of the young performers, Samantha Blaire Cutler as Mrs. Wilkinson’s crushing-on-Billy daughter Debbie and Cameron Clifford as Billy’s pal Michael (who has his own Billy crush), nearly make off with the show. Clifford’s funny, brazen Michael is a joy-filled rebuke to the characters who opine that ballet is less than manly.

Viernes is a stunning young dancer, expressively frightening and furious during Angry Dance, thrillingly exuberant as he expresses his passion on Electricity, and harmoniously glorious during his soaring dance with chiseled Maximilien A. Baud as the grown-up Billy.


J.P.Viernes is a fifteen year old dancer who can set the joint on fire with just a couple of taps and a pirouette.   And he does just that as Billy in Billy Elliot The Musical now playing at the Broward Center.

Winner of the 2009 Tony Award for Best Musical, Billy pretty much lives up to its reputation.  Elton John's music wrapped with Lee Hall's book and lyrics and Peter Darling's choreography is a formidable package indeed.

...we see some genius casting.   The show simply pops whenever the small town girls show up  for their ballet lessons.   There are no honeys here, just talented kids ordinary in every other respect, who make you sit right up and pay attention.  They are lead by the excellent Leah Hocking as Mrs Wilkinson, (I've seen it all, son, and didn't like much) the ballet teacher.

The choreography is outstanding and never more so than when the local policemen first appear.

Cameron Clifford played cross-dressing Michael, Billy's best friend, and play is the operative word here.   A truly beguiling youngster whose donning of a tutu was an almost endless delight.

As usual, fashion editor Rod Stafford Hagwood was sent out by The Sun-Sentinel:


Billy Elliot: The Musical dances in the no man's land between soaring musical and working-class blight. Now, that's a tricky tap-dance to pull off, and the fast-moving, yet repetitive, musical frequently lands just right with this touring company at the Broward Center for the Performing Arts.

But it just as often falls flatfooted, each pirouette calculated and mechanical, the emotions dampened and muted.

On opening night, J.P. Viernes nailed choreographer Peter Darling's daunting mix of ballet, tap, folk and acrobatics. But his best scenes were the smaller, quieter ones -- such as when Billy finds his center in a ballet class taught by the sweet-and-sour Mrs. Wilkinson (a delightfully blowzy Leah Hocking), and when he almost tour jete's right into his father (the brilliantly bellicose Rich Hebert)...

While Elton John's score is forgettable, it's mostly a nice mix of protest songs and folk ditties with nary a pop ballad or treacly tune. The show rations its Broadway flash for the numbers "Solidarity" and "Expressing Yourself." The only transporting music is not John's, but Tchaikovsky's "Swan Lake," in an imagined pas de deux between Billy Elliot and his older self.

The "Angry Dance," so powerful in the film, was almost precious here, taking the audience into intermission with a sense of ambivalence.... The second act, however, has real punch and real pathos, particularly with the deeply moving "Once We Were Kings." But then, the ending – which differs from the cinematic version -- just doesn't connect, and the huge, joyous finale feels ever-so-slightly unearned.


Enter Michael; played by Cameron Clifford!  This small-fry scene-stealer (a la “Oliver’s Artful Dodger) owned it until the dancing really started. Tapping out a lively song-and –dance, “Expressing Yourself” we really get to see those unbelievable moves.

For this Broward Center opening night, the treat was J.P. Viernes.  A lithe figure who could glide across the stage with leaps and turns, bumps and grinds, tap and ballet, and not even need to catch his breath.  With grace and athleticism, Viernes proved to be the consummate musical comedy star by singing and with an emotional turn as an actor. Billy is on stage for a huge part of the show; a tremendous task on the shoulders, or should we say, feet, of  the 13 year old.

Kudos to Choreograper Peter Darling, Director Stephen Daldry, and Writers Lee Hall and Elton John for what must have been such a special event working with such talent.

Broadway Across America presents the NETworks production of Billy Elliot the Musical at the Broward Center through March 11, 2012.
Posted by C.L.J.